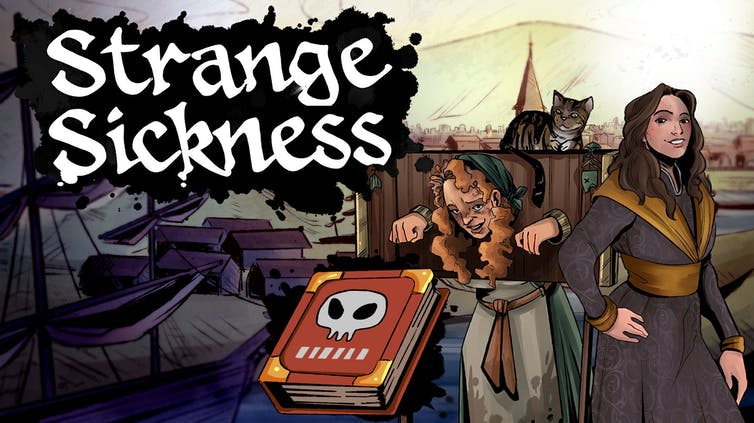 The year is 1498. The town of Aberdeen in north-east Scotland has fallen prey to a “strange sickness” that is the deadly plague. Disease is spreading in Europe, and people are afraid, but how can the sickness be stopped?

An aspiring young councillor called Robert Collison decides he must devise a way to protect the town, persuade the local governors to adopt his strategies and prevent more deaths. Can you help him succeed in slowing the strange pandemic that threatens to engulf the region?

This is the premise of a video game we created recently called Strange Sickness. But we are not computer game experts or designers: we are historians who based the game on our collaborative research into Aberdeen’s rich historical archive of medieval burgh records.

Setting up this experiment in merging historical records with digital storytelling, we enlisted the help of a video game designer and an artist. We learned a lot about computer games and the gaming industry, but most of all, we wanted to show that historians can offer a different type of authenticity than that marketed by popular video games seeking to transport people into recreations of the past.

Much of the conversation around popular historical games, such as Assassin’s Creed and Call of Duty, is about issues of accuracy and authenticity. These games present a marketable illusion of being transported into a facsimile of the past – a facsimile which is impossible.

Of course we could say that of all ways of presenting history. None can recover the past, only interpret it through surviving sources. The difference with games is their promise of interactivity and immersion, to transport the player from the everyday into another world which they can shape through their choices and actions.

Often the approach to accuracy in games is a little ridiculous. Call of Duty games set in WWII emphasise the historical accuracy of details such as weapon design while players navigate through Hollywood-style set pieces and kill hundreds of enemies. It is a peculiar form of accuracy which recreates equipment in exacting detail while allowing players, like ultra-violent superheroes, to transcend the historical setting of WWII.

History is not a window into the past, but something made by people looking at the past through whatever evidence survives. Rather than hiding this process behind a distracting – and potentially harmful – veneer of claims to historical accuracy, we wanted historical sources and the historian’s research process to be front and centre in Strange Sickness. We aimed for the game, as a form of history, to be perceived as our creation as historians.

We believed this would fit well with the culture of independent game development, with its focus on games made by smaller teams. This allows a greater focus on the style and authorship of individual creators than is normally possible in big-budget games made by huge teams of people.

We approached the development process with the goal of bringing players face-to-face with historical sources, rare in video games. Working with game designer Katharine Neil and artist Alana Bell, our immediate focus had to be on the practicalities of getting the game made.

With her experience in the games industry to the project, Katharine helped shape our ideas in relation to the mechanics, characters, locations and themes that make a narrative game work. In conversations with Alana we identified the key historical criteria for the game’s visuals while leaving space for creative freedom and the demands of the game’s design.

Some of our original ideas had to go. For instance, the early idea to have all text in the game linked back to an explanation of its historical provenance proved unworkable from both a technical and game design standpoint.

But the foundation of our approach remained. The game that emerged kept historical sources at its core. It emphasised history as something authored rather than something simply found and revealed. To offer transparency on the game’s adaptation of historical materials we created a separate game website, linked at the start and end of the game. This provides a historian’s commentary about how key elements of the game were adapted from historical evidence, with links to primary and secondary sources online.

This offers a clear pathway from the game to the underlying research and sources for players who choose to follow it. Another way to emphasise how history is created is depicted within the game itself, where the town clerk writes down what ultimately become the records that survive today in Aberdeen’s city archives.

For us, as long as the game offered a clear link to historical research and sources, emphasising the authored nature of history, we felt free to develop a fictionalised narrative and work to the needs of game design.

Presenting history in this way – as a transparent process of construction from the traces of the past – is more authentic than any attempt to create or claim a facsimile of the past, no matter how much time, money and explosions are involved.