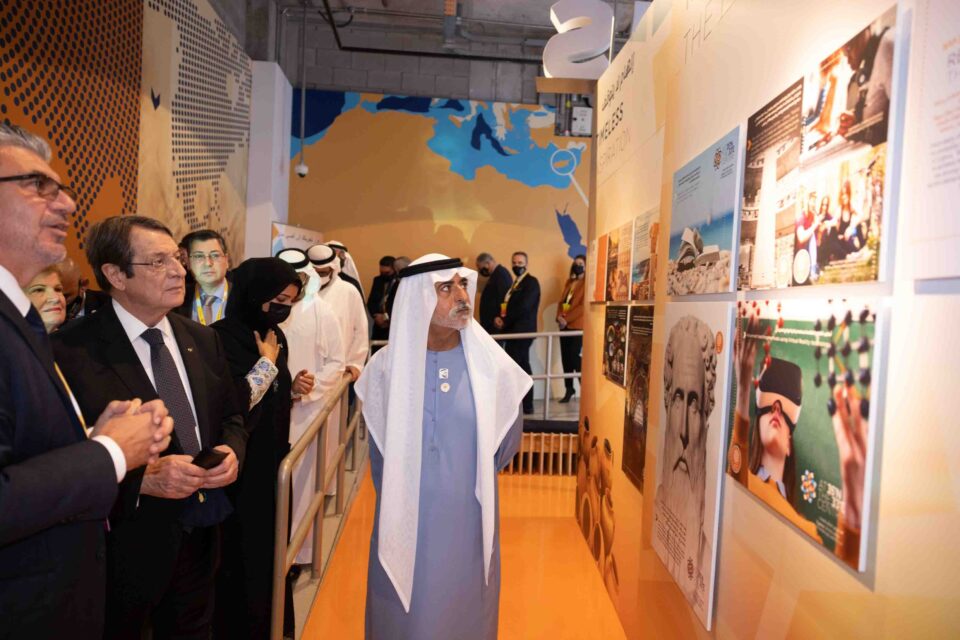 President Nicos Anastasiades, visits the Cyprus Pavilion on the occasion of the Cyprus National Day

Cyprus “as a credible contributor to the stability of the region” is fostering strategic alliances with partners based on common values and collective vision, such as the United Arab Emirates, President Nicos Anastasiades said on Thursday.

In his address at the welcoming ceremony held in his honour, at the Expo 2020 in Dubai, Anastasiades said the first Expo of the Middle East and Gulf region “is another testimony of the strength and resilience of the ever growing partnership between our two countries”.

Thanking the hosts of the event, the president said the Expo “stands as an incredible bridging ground of cultures and ideas, promoting collective global action in the face of many challenges we must tackle”.

At the same time, the Expo is “a reminder of the Emirates’ internationally acclaimed standing as a prime business hub, as well as of its contribution to effective multilateralism, also evident by its current membership in the UN Security Council”.

Anastasiades said the image of our region is changing fast “as shown by the central role of the Emirates in the historic Abraham Accords”.

“Cyprus, as credible contributor to the stability index of the region, cannot but be part of this vastly positive regional transformation,” the president said.

In a quest for a secure and prosperous future, particularly in our volatile region, Anastasiades said, the country is fostering strategic alliances with partners based on common values and collective vision, and most importantly on shared interests, such as the United Arab Emirates.

These relations “will continue to prosper and become even more robust in the years to come, for the benefit of our peoples as well as for peace and stability in our region” he added.

According to Anastasiades, Cyprus partnership with the UAE is entering an even more dynamic phase with ties in a plethora of areas deepening and expanding rapidly.

The president was accompanied by nine ministers, as well as the government agency for the attraction of investments, who held bilateral meetings with their counterparts.

Several bilateral agreements were also signed during the trip, with the most important one being the one on Strategic Partnership, which was described by Anastasiades as a “striking example of our commitment to enhance our vibrant relations at a bilateral, trilateral and multilateral level”.

Furthermore, a dynamic and sizeable delegation of business people from both Cyprus and the United Arab Emirates participated in the business forum, with the aim to explore business opportunities and cooperation prospects in a various fields, such as renewable energy, tourism, trade, agriculture, shipping and research and development.

Cyprus’ entry to the event is based on six themes, each one with its own booth. They include art and culture, tourism, gastronomy, entrepreneurship, investments and education.

Each theme is presented in a separate booth and with a different colour, based on the logo of our country in the exhibition, along with the following slogan: Cyprus, at the centre of where you want to be.

The slogan “encapsulates one of the most prominent characteristics and strengths of our country” the president said, which is the island’s strategic location at the crossroads of Europe, the Middle East and Asia.

The expo’s overall theme is ‘Connecting Minds, Creating the Future’, with around 25 million visitors expected to travel to Dubai from 192 countries.

Foreign automakers see their chance in Japan with electric vehicles