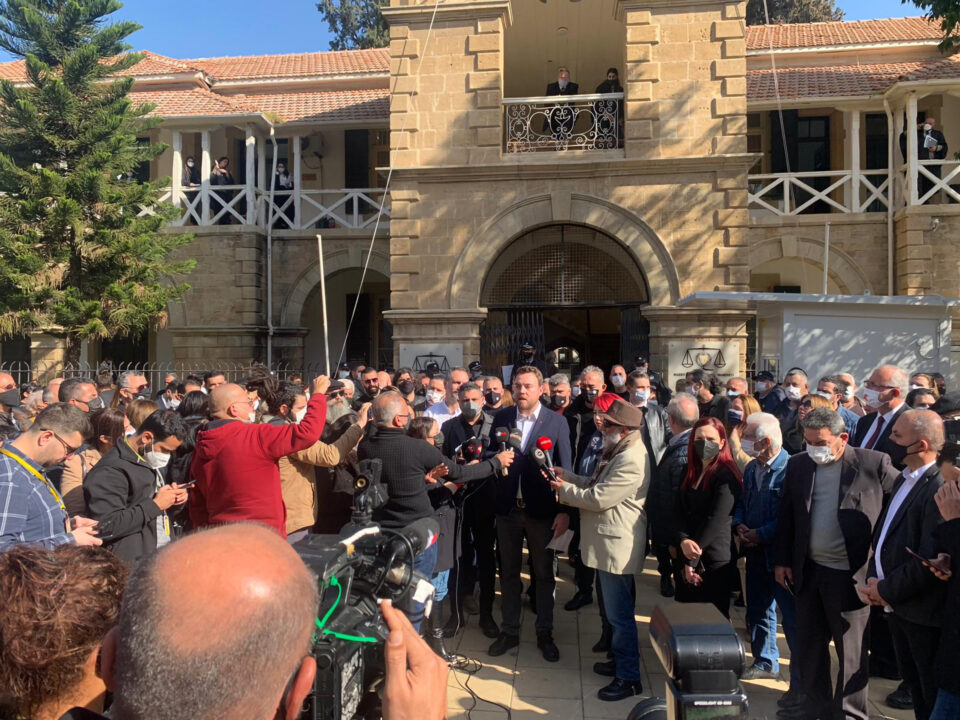 Journalists demonstrate outside the court in northern Nicosia on Monday

More support for Turkish Cypriot journalist Ali Kismir poured in on Monday from Cyprus and from Turkey, as the presidents of the journalists’ associations of both countries condemned his arrest.

People showed their support to the Turkish Cypriot journalist during a protest in front of the ‘supreme court’ in northern Nicosia where his trial was supposed to start. It was then postponed to a later date yet to be announced.

Kismir faces criminal charges for an article, written at the time of Ersin Tatar’s election as ‘president’, in which he strongly criticised Turkey, the AKP government and the Turkish occupation forces in the north for interfering in the affairs of the Turkish Cypriots.

He is being charged with offending the security forces, a charge that could lead to a prison sentence of up to 10 years. Kismir had recently been deported from Turkey and was informed that he would face criminal charges by Turkish Cypriot police who also want to ban him from leaving the north.

“As a Turkish citizen, I am ashamed of President Recep Tayyp Erdogan’s behaviour on the issue,” the president of the Association of Turkish Journalists Mustafa Kouleli told the Cyprus news Agency.

“The Turkish government should stop imposing its rules on Cyprus, it should not interfere in internal affairs, but let the community live in peace with its own rules.”

Kouleli said that the trial is an attempt to intimidate every critical voice and independent media in the north, adding that Erdogan’s authoritarian methods are expanding in Cyprus as well.

“However, they will not work,” Kouleli said. “I have several friends among Turkish Cypriot journalists that are not afraid to speak freely and without fear.”

The head of Cyprus union of journalists (Esk) George Frangos, who, along with Kouleli, demonstrated in favour of Kismir on Monday, said that whenever freedom of speech is violated, journalists are the first figures to be targeted.

“Kismir is not just a struggling journalist, fighting a wrongful arrest, but also a colleague with whom we cooperated for years,” Frangos said.

“We will be at his side for as long as he needs us, standing for the freedom of the press and for our Turkish Cypriot friends’ right to express their own opinions.”

“Let me be clear, he is not the one who should be charged,” Akinci said.

“Those who should be tried are those who think they have the right to intervene in state affairs in the most anti-democratic way. Perhaps his side of the story will not be heard in court, but it will be impossible to overlook the reasons for him being charged.”

Leader of the People’s Party Kudret Ozersay was equally condemning.

“Prosecuting journalists for what they write is not in line with the values of the world of which we wish to be a part,” he said, adding that freedom of expression is one of the most important guarantees granted in a democracy.

Demo in support of Ukraine on Monday night