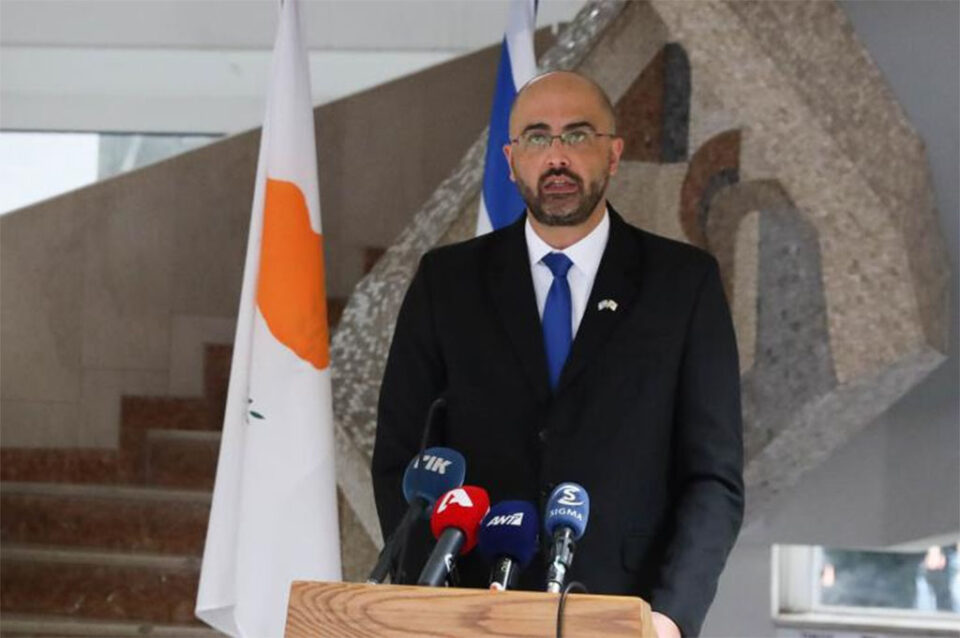 Any improvement between Israel-Turkey relations will not be to the detriment of Cyprus or any other country in the region, Israeli ambassador to Cyprus Oran Anolik said on Tuesday.

“We are very careful on this issue, we are discussing with Turkey with our eyes wide open and at the same time we continue to send a very clear message to everyone that any improvement between Israel and Turkey will not be to the detriment of Cyprus or any other country,” Anolik said.

Speaking to the Cyprus News Agency before the arrival of Israeli President Isaac Herzog for an official visit on Wednesday, the ambassador said Cyprus and Israel are linked by strong ties that date back to even before the establishment of the two states.

An example of the “almost historical roots” is how the grandfather of President Herzog made an investment in Cyprus in the 1930s in Fassouri, the ambassador said.

Referring to the Israeli president’s meeting with Anastasiades, Anolik said this will be a good opportunity to exchange views at the highest level on both bilateral and regional developments.

“President Herzog and President Anastasiades will probably discuss the trilateral relationship together with Greece, but also the mutual interest we have in using this trilateral platform to promote synergies with other countries, such as the US (3+1 format), moderate Arab countries such as Egypt, and the Abrahamic Pact countries, the UAE or Bahrain.”

Higher education and research could also be part of the scope for the development of bilateral relations, the Israeli ambassador said.

“I also know there are Israeli students who come to Cyprus to study in medical schools, and Israel is very interested in bringing foreign students, including from Cyprus to study in Israeli higher education institutions. This issue will definitely be part of the agenda,” Anolik added.

Herzog is also expected to speak about his his forthcoming visit to Turkey.

According to Turkish media, Herzog is due to travel to Turkey where he will meet President Recep Tayyip Erdogan on March 9-10.

Issues such as energy, climate change, emergency response and tackling fires will also be part of the meeting’s agenda, according to the ambassador, while Ukraine’s invasion by Russia “is very likely” to be discussed as well.

“Neither of our countries is a major player in this issue [Ukraine’s invasion], so I don’t think it will take up much of the discussion, we will try to look together at our approaches to what we are doing and what we are learning from this development,” he said.

Meanwhile, police have announced that increased security measures will be applied in Nicosia and Larnaca on Wednesday due to the arrival of the Israeli President, who has been in Greece since last Thursday.

There will be road closures and diversions in Larnaca and Nicosia, as well as on the Larnaca-Nicosia motorway from 10am until 4pm.