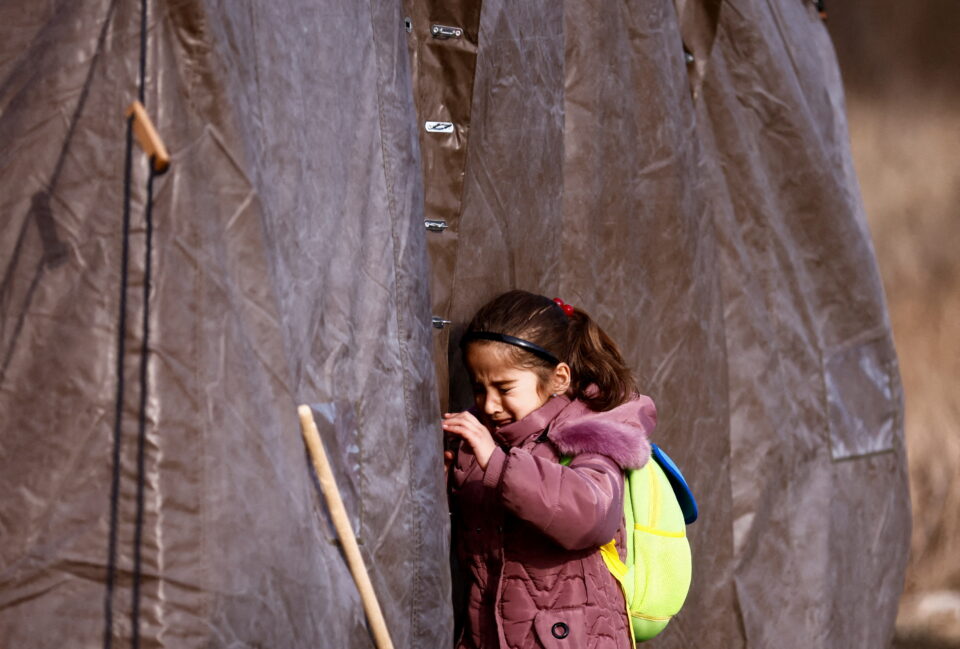 A child fleeing Russian invasion of Ukraine reacts as she stands outside the tent, at a temporary camp in Przemysl, Poland

More than 1.7 million Ukrainians fleeing Russia’s invasion have so far crossed into Central Europe, the United Nation’s refugee agency said on Monday, as thousands more streamed across the borders.

Poland – which has the largest Ukrainian community in Central Europe – has received more than 1 million Ukrainian refugees since the conflict began on Feb. 24, with the milestone passed late on Sunday.

“This is a million human tragedies, a million people banished from their homes by the war,” the Polish border guard service tweeted late on Sunday.

A total of 1,735,068 civilians – mostly women and children, as men stayed home to fight – have so far crossed the border into Central Europe, the UNHCR said.

At Przemysl train station, the nearest large Polish town to its busiest border crossing with Ukraine, some 150 Ukrainian children from orphanages in the Kyiv region arrived by train from Lviv.

As they waited to disembark, they gathered at the train’s windows and peeked outside: some smiled, others blew kisses or waved to the volunteers in yellow reflective jackets on the platform. One volunteer clowned around to entertain them.

In the same town, a children’s charity had prepared a converted school sports hall to welcome them.

“We have food for them, there will be lots of kids who are very small so we will have to change diapers, etc,” Przemek Macholak, 25, deputy head of crisis response at Happy Kids, a Polish non-governmental organisation, told Reuters.

“Then they will go to the buses again, they will go off to Poland, another 20-hour journey,” he said in the hall, where mothers and children rested on cots in the main hall and donations of clothes, food and drinks lined the corridors outside.

Happy Kids, which has assisted the evacuation of some 2,000 orphans so far, said it was trying not to separate the children once they arrived in Poland.

“That will finance the most urgent supplies and lodging but also the access to the labour market, social benefits and education,” Minister Lukasz Schreiber told private broadcaster Radio Plus earlier on Monday.

So far the aid effort has been predominantly shouldered by non-governmental organizations, volunteers and municipalities.

In Romania, at the Siret border crossing with Ukraine, volunteers in reflective jackets welcomed Ukrainian mothers carrying backpacks, pushing prams or holding toddlers as they left the crossing, with the wind blowing and the snow falling.

One woman brushed away tears as she walked.

Meanwhile, Czechs have now donated 1.5 billion crowns ($62.8 million) so far towards aid for Ukraine, the largest amount ever collected for humanitarian help in the country, Czech TV reported.

Coronavirus: Where to get tested on Tuesday