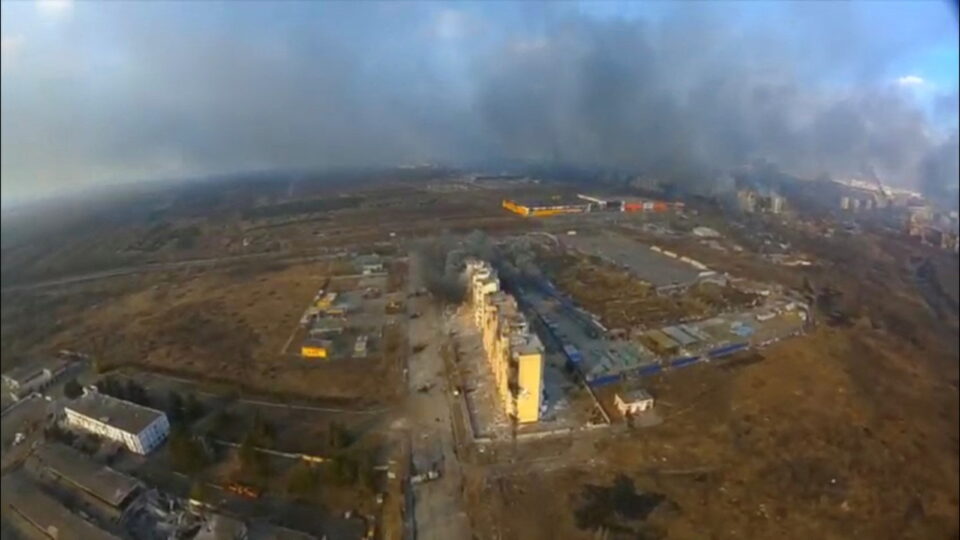 An aerial view shows smoke rising from damaged residential buildings following an explosion, amid Russia's invasion of Ukraine, in Mariupol

Ukraine accused Russia on Tuesday of blocking a convoy trying to take supplies to the besieged city of Mariupol, where the Red Cross said desperate families were being “suffocated” as food and water ran out.

Deputy Prime Minister Iryna Vereshchuk said hundreds of civilians managed to leave Mariupol in cars for the second successive day, but the aid convoy trying to reach the port city was stuck at nearby Berdyansk as Russian shelling continued.

“Our side ensures a complete ceasefire,” she said. “Russia, as usual, is cynically lying, thinking that people and the world do not see it and do not understand.”

Russia did not immediately comment on the situation around Mariupol. It denies targeting civilians and has blamed Ukraine for the repeated failure to establish safe passage for civilians and humanitarian convoys since it invaded Ukraine on Feb. 24.

Mariupol residents have been without heating, electricity and running water for most of the past two weeks, and at least 200,000 are in urgent need of evacuation, according to official Ukrainian estimates.

Vereshchuk said the majority of residents do not have cars, so there was a need for buses to reach the city in convoys so that they can be evacuated.

Residents are “essentially being suffocated in this city now with no aid,” Ewan Watson, spokesperson for the International Committee of the Red Cross (ICRC), told a U.N. briefing in Geneva.

The ICRC said on Twitter that “tens of thousands of families are living under the constant threat of danger” in Mariupol.

“They’re huddled in whatever shelter they can find. They have limited food and water. They’re terrified,” it said.

Russian forces agreed on Monday to allow the creation of a humanitarian corridor out of Mariupol. The first evacuation convoy then left, after more than a week of failed attempts to do so, but Ukrainian officials were unable to deliver any aid.

About 300 civilians had by Tuesday morning reached the city of Zaporizhzhia, about 225 km (140 miles) from Mariupol, the Mariupol city council said.

By early afternoon on Tuesday, about 2,000 cars had left Mariupol and a further 2,000 were waiting to leave, it said.

More than 2,500 Mariupol residents have been killed since the Russian invasion, a Ukrainian official said on Monday. Reuters was unable to verify the toll.

Officials in Moscow describe Russia’s offensive in Ukraine as a special military operation to disarm the country and prevent “genocide” against Russian-speakers, a justification dismissed by Ukraine and the West as a false and illegal pretext for an invasion of a democratic country.

1821 revolution to be staged with Playmobil figures