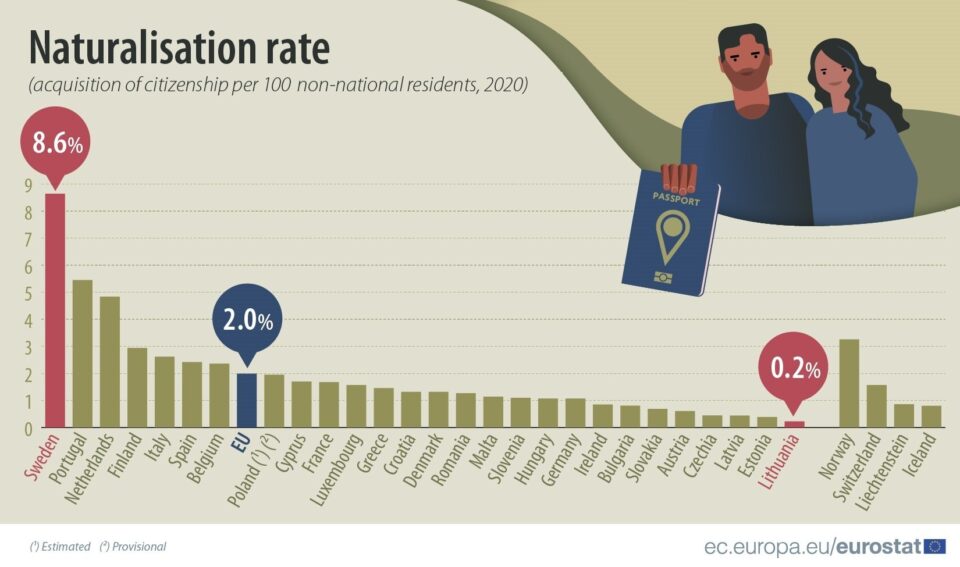 Cyprus granted fewer citizenships in 2020 compared with the previous year, bucking the EU trend which saw a total of around 729,000 persons given citizenship of an EU member state, a three per cent increase from 2019, Eurostat data showed on Friday.

The data applies to the year Cyprus decided not to accept any more applications as it moved to scrap its controversial citizenship by investment programme and revoke several citizenships, following a string of damning reports.

According to recent statistics on the acquisition of citizenship in the European Union (EU), this increase was mainly due to the increases recorded in Spain as 27,300 more Spanish citizenships were granted compared with 2019, followed by the Netherlands with 21,800 more EU citizenships, Sweden with 16000, and Portugal with 11,000.

As in 2019, the majority (85 per cent) of those who obtained the citizenship of an EU Member State in 2020 were previously citizens of a non-EU country or stateless. Of these, citizens of Morocco made up the highest numbers, followed by citizens of Syria, Albania, Brazil, and Turkey.

Former citizens of another EU Member State accounted for 13 per cent of the total number of citizenships acquired.

Eight per cent of those who were granted citizenship from EU member states that year were aged 55 and over, with Cyprus accounting for one fourth of these, before Bulgaria with the highest share of 30 per cent and ahead Lithuania with 20 per cent.

The countries with lowest shares of elderly new citizens were Romania, Greece, Estonia (each with 5 per cent), Austria (4 per cent), and Slovenia (2 per cent).

In Lithuania, no children under 15 years were granted citizenship in 2020; other countries with a low proportion of citizen acquisitions by children were Portugal (7 per cent), Luxembourg (6 per cent), Ireland (6 per cent), and Bulgaria (4 per cent).

Meanwhile, Sweden had the highest naturalisation rate, meaning the ratio of the number of persons who acquired the citizenship of a country during a year over the stock of non-national residents in the same country at the beginning of the year.

At least 12 migrants, most of them Syrians, drown off Tunisia in shipwreck