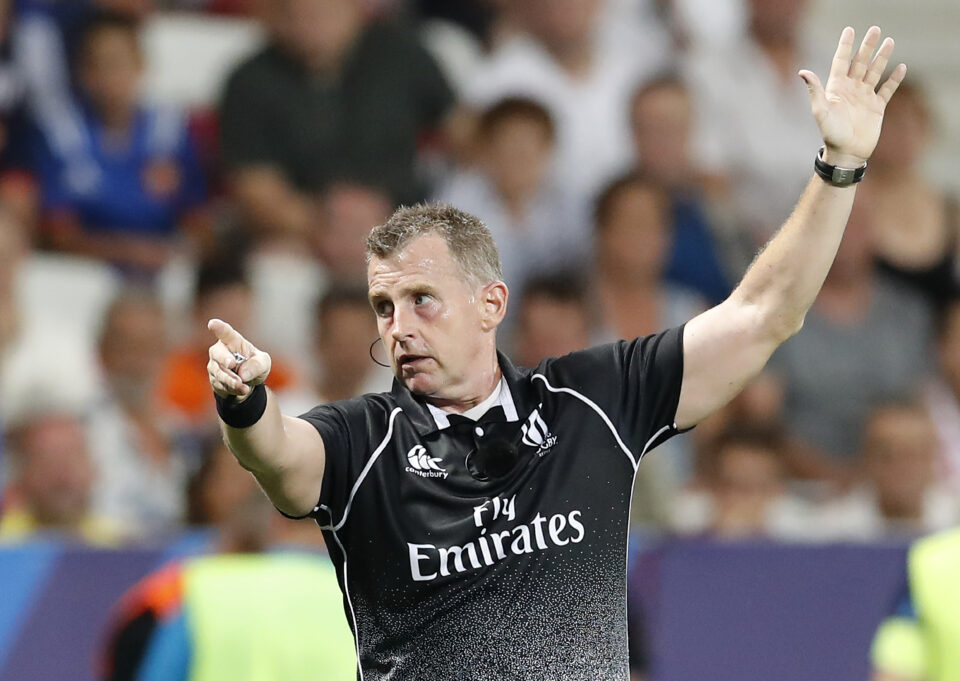 Players have been constantly told “change your behaviour” in regard to tackle height for the last three years but according to rugby’s most famous referee too many are still not getting the message and the consequences can be immensely dangerous.

Nigel Owens, widely admired as the best referee in the game before he retired internationally in 2020 after taking charge of his 100th test, says he is struggling to understand incidents such as England prop Charlie Ewels smashing into the head of Ireland’s James Ryan last Saturday.

“The disappointing thing is that we’re still seeing these sort of dangerous, upright tackles,” Owens told Reuters in an interview.

“Sometimes you make a tackle and you get it wrong, things do happen, but everybody should know now that if you go in high you are putting yourself and the opposition player at risk of injury and you are probably going to get a card, which most of the time will be red.”

The clamp down on high hits really took hold during the 2019 World Cup and one of the signs of progress is that few people these days tend to question it when such an incident is penalised with a red car.

England coach Eddie Jones said he had no issues with Saturday’s dismissal in the second minute as Ireland went on to win the Six Nations clash 32-15 and Ewels accepted it was dangerous during the disciplinary hearing that handed him a three-game ban.

Owens is clear where he thinks the responsibility lies in trying to remove such contact from a sport that is brutal enough with its legal hits and is facing something of a crisis in terms of concussion, both before and after playing careers.

“It’s not the game’s fault, it’s not the administrators’ fault and it’s not the referees’ fault – it is player behaviour that needs to change,” said Owens, who was speaking to Reuters in conjunction with William Hill.

“They have to lower their tackle and get a better technique and until they do that we are going to see incidents like this that can maybe lead to a history of concussions and maybe career-ending or life-changing injuries later on.

“People just need to understand that. There’s no point in debating whether it should be a 20-minute sin bin or an orange card or whatever, we need players to change and we need coaches to spend more time making them change, and everyone needs to buy into it.”

While coaches, commentators and pundits had no issue with Ewels’ red card, many at Twickenham showed their displeasure by booing the subsequent penalty kick from Ireland’s Johnny Sexton.

Owens dismissed that unusual behaviour as “part of the theatre” but agreed the game could do a better job at disseminating the process.

“It is strange that people sitting at home watching the game get all the communications and yet the person who pays 100 pounds ($131.20) plus and is creating that atmosphere in the stadium doesn’t really know what’s going on,” he said.

Owens was in slightly less forgiving mood when it came to refereeing of scrums in the Six Nations, which have been dogged by endless re-sets and penalties.

He had some sympathy for Jones, who complained that England were not allowed to gain the benefit of their scrum dominance, despite winning a series of penalties.

“Overall, the refereeing has been pretty tidy and we haven’t been looking at controversial decisions that have decided matches, but one of the areas that I think needs to be refereed better is the scrum,” he said.

“There is an important point here – it’s the players that need to change. It’s they who are slow setting up, they who are causing the collapses and the re-sets, but I do feel that referees need to be stronger with it.

“So if a team is really slow setting up, a free kick is there in the laws to be given. We haven’t really seen a Six Nations game this year where the scrum has been a potent theatre of attack because we haven’t seen any side getting real clear dominance because so there is so much instability.”

Watery wonderlands: where to explore the best wetlands