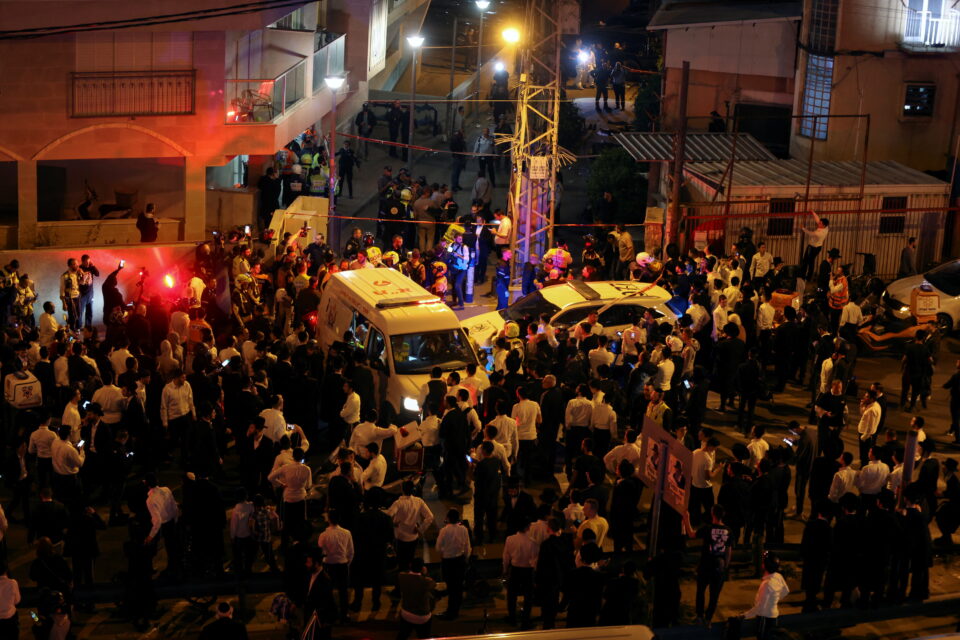 People gather at the scene of an attack in which people were killed by a gunman on a main street in Bnei Brak, near Tel Aviv

An Arab gunman killed at least five people in a Tel Aviv suburb on Tuesday before he was fatally shot, the national ambulance service said, in the third deadly attack in Israel in a week.

“Israel is facing a wave of murderous Arab terror,” Prime Minister Naftali Bennett tweeted after the shootings in Bnei Brak, a Jewish ultra-Orthodox city on the outskirts of Israel‘s commercial capital.

The shooting raised to 11 the number of people killed by Arab gunmen in Israel over the past week, the sharpest spike in attacks on city streets in years.

Palestinians have been reporting a rise in settler violence across the West Bank and East Jerusalem, which Israel captured in a 1967 war.

Amateur video broadcast on Israeli television stations showed a man dressed in black and pointing an assault rifle walking down a road in Bnei Brak.

Israeli media reports, quoting unidentified security officials, said the assailant was a Palestinian from a village near the city of Jenin in the occupied West Bank.

Police said he killed four civilians and an officer who had arrived on the scene before officers fatally shot the gunman.

There was no immediate claim of responsibility for the attack.

Israeli officials had cautioned about a surge in assaults in the run-up in April to the Muslim holy month of Ramadan, a period in which violence has surged in the past.

In Bnei Brak, witnesses said the gunman began shooting at apartment balconies and then at people on the street and in a car.

“I live on Hashneim Street in Bnei Brak and I was at home when I heard gunshots,” paramedic Menachem Englander said, according to a tweet posted by Magen David Adom. “I immediately went out to the street and saw a terrorist pointing a weapon at me. By a miracle, his weapon jammed and he couldn’t shoot.”

Last week, an Arab citizen of Israel killed four people in a stabbing and car ramming attack in the southern city of Beersheba, before he was shot dead by a passerby. Israeli authorities said he was an Islamic State sympathiser.

On Sunday, as an Israeli-Arab summit convened in southern Israel, an Arab assailant shot and killed two police officers in Hadera, a city some 50 km (30 miles) north of Tel Aviv. Other officers shot and killed him.