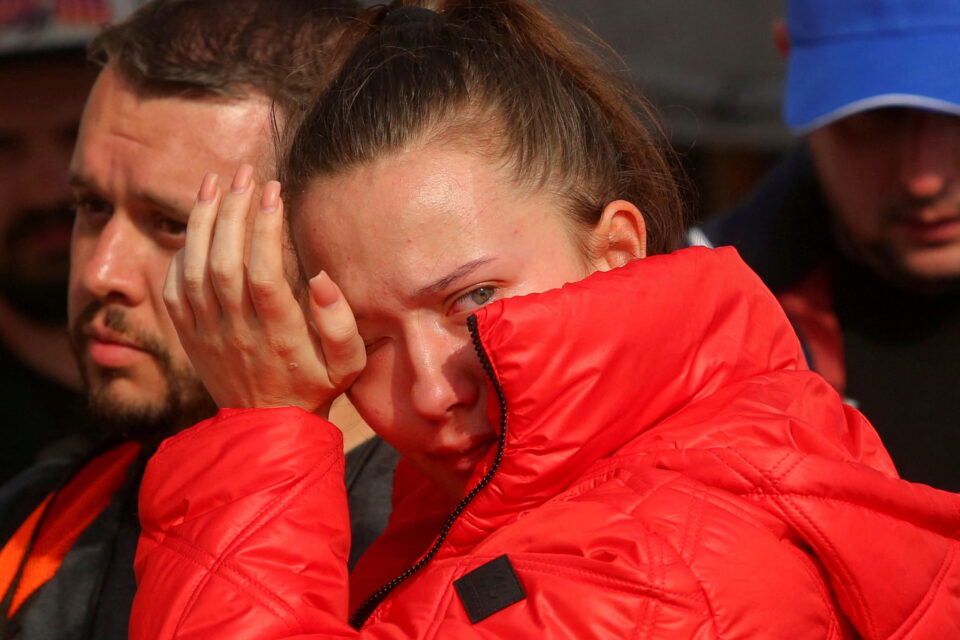 A Ukrainian who fled her homeland amid Russia's invasion wipes tear from her eye before being allowed entry into the the United States at the San Ysidro Port of Entry of the U.S.-Mexico border

Hundreds of Ukrainians are camping in the Mexican border city of Tijuana hoping to seek U.S. asylum, a surge in arrivals just days after the Biden administration said the United States would accept up to 100,000 Ukrainians fleeing from war.

Many of the Ukrainians escaping the Russian invasion of their home country have flown to the U.S.-Mexico border hoping officials will allow them in so they can reunite with U.S. relatives or friends.

People are spread out on blankets and lawn chairs alongside overstuffed suitcases on a patch of grass near the international port of entry. Some are sleeping in tents and under tarps.

U.S. volunteers in neon vests – some Ukrainian-Americans who traveled to Tijuana after hearing about the arriving refugees – are collecting names on a handwritten waitlist to keep track of arrivals.

While some 600 Ukrainians are camping near the border entry around 500 more are staying in hotels in the city, said Enrique Lucero, Tijuana’s migration affairs director, citing the list kept by volunteers. About 40% of the people are children, he added.

Lucero said around 100 Ukrainians are being allowed to cross into the United States daily. U.S. Customs and Border Protection said data on the number of Ukrainians who entered the U.S. in March would be available in coming weeks.

The number of people at the southwest border is still small compared to more than 3.8 million Ukrainians who have fled to nearby countries in Europe since the Feb. 24 invasion, which the Russian government calls a “special military operation.”

In response to the exodus — the biggest refugee crisis in Europe since World War Two — U.S. president Joe Biden pledged last week to accept some 100,000 Ukrainians into the United States through various legal pathways.Read full story

But some families desperate to leave have resorted to traveling through a string of countries to the southern border, after being denied U.S. visas, or told to wait, at U.S. embassies abroad.

While Ukrainians and Russians have been arriving at the U.S.-Mexico border since before the conflict erupted, now people are coming “very quickly,” said Julia Neusner, an attorney with the New York-based non-profit advocacy group Human Rights First. L2N2V61WR

On average, Ukrainians are waiting about one day from the time they are put on the list compiled by volunteers until they can cross into the United States, Neusner said.

Two weeks ago, according to a Reuters witness, around 15 Ukrainians per day were arriving at the Tijuana border and being immediately waved through. Read full story

RUSSIANS, OTHER MIGRANTS LEFT BEHIND

While Ukrainians are being ushered into the United States, U.S. border agents have told Russians, Mexicans, Central Americans and migrants from other countries to stay put, citing a pandemic-era border expulsion policy known as Title 42 that has closed the U.S.-Mexico border to most asylum seekers.

On Friday, the Biden administration announced it will end the expulsion policy in late May, as U.S. health officials said it was no longer needed to protect public health. Read full story

Inna Levien, 42 – originally from Belarus – said she and other Russian-speaking members of her moms’ group in Orange County, California, headed down to Tijuana earlier this week to help Ukrainian refugees, many of whom speak Russian.

“Vomiting, diarrhea, they are so stressed out, they are dehydrated,” she said. “They have this unrest inside.”

One six-year old girl told Levien she was praying to protect her father who stayed behind to defend Ukraine because it was her “job” to be his “guardian angel.”

Valentina Shymanveska, a 56-year-old from war-torn Kharkiv in Ukraine, was grateful to be received in Tijuana after her city was pummeled by constant Russian bombardments.

“I couldn’t cry in Ukraine. I thank you even for my tears,” she said. “For this place, this food, and the dream of life until [Ukraine’s] victory.”