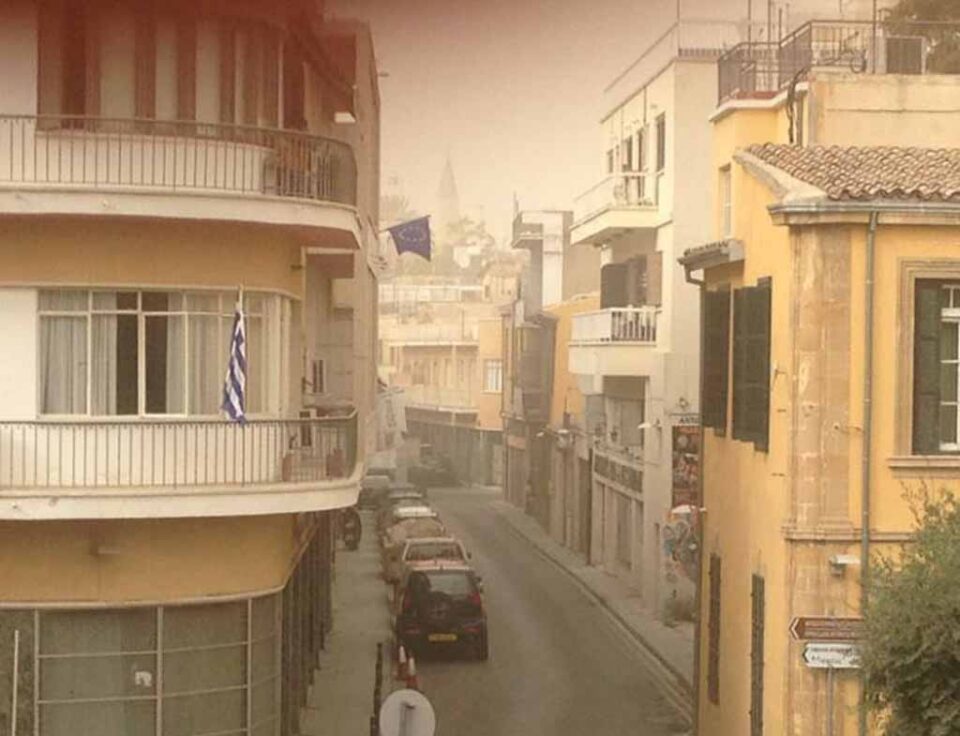 Dust levels remain high, with authorities issuing a new warning on Thursday urging the public and particularly vulnerable groups of the population to avoid going out.

Similar warnings have been issued every day this week, but the current protracted dust episode is receding, with the situation expected to improve by late on Friday.

Civil defence on Thursday also joined calls on the public to exercise caution, issuing recommendations on how to minimise the impact on their health.

The current dust episode in Cyprus is running on its sixth day with hot conditions of up to 32 degrees expected today, keeping particles in the air.

The past decade has seen the highest dust values ever recorded in Cyprus, affecting more than 70 days from 2010 through to 2022, with Nicosia recording ten times the safety level in September 2015, according to Quality of Air data, made available to the Cyprus Mail.

At ten this morning, Nicosia and Larnaca were almost at three times the safe level of 50, with the rest of the cities close to double.

Chrysanthos Savvides, head of air quality and strategic planning at the department of labour inspection said the pattern is certain to continue, considering the island’s geographical proximity to areas with severe and worsening activity in dust storms, such as the Sahara and Sahel in North Africa and arid regions of the Middle East in Syria, Jordan, Iraq (three countries that have seen destruction of arable land due to decade long wars) and Saudi Arabia.

According to Savvides, climate change is a major factor in the transfer of dust clouds, both in speed, duration and frequency of episodes. The highest values are usually recorded from November to April.

Fast changing weather conditions in Cyprus, including a significant rise in temperatures, worsening drought and lack of adequate water resources, contribute to higher values originating from urban abandoned unbuilt areas or open spaces on the outskirts of cities.

The Eastern Mediterranean-in particular Cyprus, Greece and Israel, are referred to in scientific research as the areas taking the brunt of the desertification process affecting many areas that are seeing extreme phenomena, such as prolonged heatwaves and catastrophic floods.

In its announcement early on Thursday, the labour ministry said measurements from ground stations of the air quality monitoring network operated by the department of labour Inspection showed high concentrations of dust in the air.

The public and particularly any vulnerable groups of population (children, older people and the infirm) are urged to avoid circulating in open spaces until the observed episode has elapsed, as the small size of respirable particles in dust may have negative effects on human health, it added.

Employers must take appropriate organisational and/or technical measures after assessing any risks that their employees may face while working in open spaces, and it is recommended that workers in such spaces use appropriate means of personal protection.

It is noted that ‘dust’ refers to respirable particulate matter of a diameter smaller than 10 μm (PM10) in the air. According to the relevant legislation, a limit value not to be exceeded is set for the daily average concentrations at 50 μg/m3 (micrograms per cubic metre).

More information on the measured pollutant concentrations and real-time updates is available online at www.airquality.gov.cy and also through the free mobile application ‘Air Quality Cyprus’.

For its part civil defence urged the public to avoid unnecessary movement and physical exercise outside, restrict their time outside, use personal protection if working outside, wear a mask if they have serious respiratory problems, contact their doctor if they have difficulty breathing and to follow updates on the quality of air.