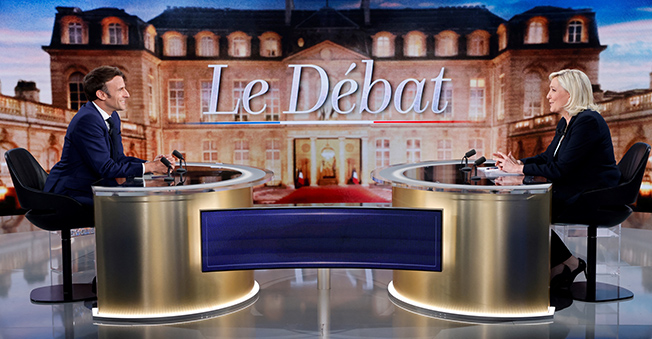 French President Emmanuel Macron and far-right challenger Marine Le Pen battled on Wednesday over who would be best placed to improve voters’ purchasing power and run France’s foreign policy, in their only debate before Sunday’s election.

For Le Pen, who lags Macron in voter surveys, the much awaited confrontation is a chance to persuade voters she has the stature to be president and they should not fear seeing the far-right in power.

“I want to give the French their money back,” Le Pen said, hitting hard against Macron’s record in office, saying that over the past five years she had seen the French “suffer”.

“I would like to tell them that another choice is possible,” Le Pen said, adding: “I will be the president of the cost of living.”

Macron’s strongest line of attack against his far-right rival at the start of the debate was her past admiration of Russian President Vladimir Putin, a loan for the 2017 campaign contracted through a Russian bank and her recognition of Russia’s annexation of Crimea.

“You depend on the Russia power, you depend on Mr Putin. You took out a loan from a Russian bank,” Macron told his opponent. “A lot of your choices can be explained by this dependence,” he said, adding: “you made a choice that constrained you politically.”

In a heated exchange, during which Macron at one point told Le Pen “Are you kidding me?” Le Pen rejected the accusations, saying: “I am a completely free and independent woman.”

With unemployment at a 13-year low, he said he was proud of job creation during his term and added: “the best way to gain purchasing power is to fight unemployment.”

The two candidates kept interrupting each other at the start of the debate, with Le Pen saying that “in real life” her proposals would improve voters’ situation much more than her opponent, while Macron said some of her proposals were not realistic.

“Mrs Le Pen, what you said is inaccurate,” Macron told his opponent about her proposals to slash VAT to improve purchasing power. “And you responded to none of my remarks because you have no response,” he said.

Much haggling went on behind the scenes ahead of the debate, from the temperature of the room to flipping a coin to decide which theme they would start with – the cost of living – to who would speak first – Le Pen.

Last time they faced off in a debate, in 2017, Le Pen’s presidential challenge unravelled as she mixed up her notes and lost her footing.

The prime-time debate on that occasion cemented Macron’s status as the clear front-runner.

But Macron is no longer the disruptor from outside politics and now has a record that Le Pen can attack. Meanwhile, she has tacked towards mainstream voters and worked hard at softening her image.

“He’s not the same opponent anymore. He now has spent five years in power which wasn’t the case last time,” Le Pen said before the debate.

After more than half of the electorate voted for far-right or hard left candidates in the first round, Macron’s lead in opinion polls is much narrower than five years ago, when he beat Le Pen with 66.1% of the vote. Voter surveys on Wednesday projected he would win with 55.5-56.5% this time.

Some 14% of voters are waiting for the debate to decide who to vote for, a poll by OpinionWay-Kea Partners for Les Echos newspaper showed.

No surrender in Mariupol despite deadline; refugees top 5 million