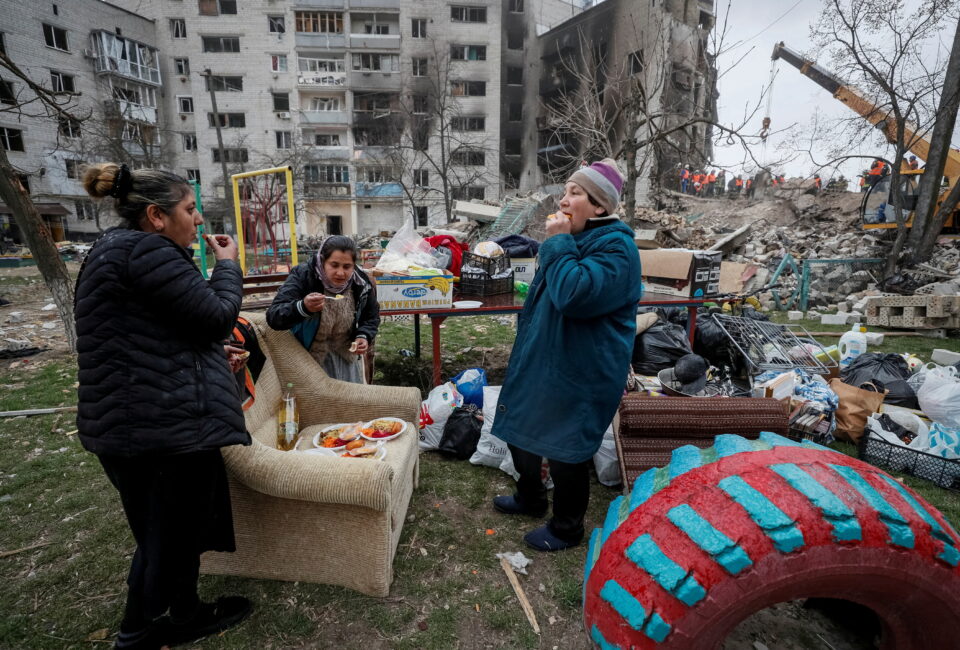 Russia heads into the third month of its invasion of Ukraine on Sunday with no end in sight to fighting that has killed thousands, uprooted millions and reduced cities to rubble.

In the face of mounting sanctions and fierce Ukrainian resistance bolstered by Western arms, Russia has kept up its long-distance bombardment and opened up a new offensive in the east.

Some key events so far:

* Russian President Vladimir Putin says he is launching a “special military operation” to demilitarise and “denazify” Ukraine. Ukraine’s President Volodymyr Zelenskiy tweets: “Russia has embarked on a path of evil, but Ukraine is defending itself.”

* March 1: Russia hits a TV tower in Kyiv and intensifies bombardment of Kharkiv in the northeast and other cities, in what is seen as a shift in tactics as Moscow’s hopes of a quick charge on the capital fade. Read full story

* A U.S. official says a miles-long Russian armoured column bearing down on Kyiv has not made any advances in the past 24 hours, bogged down by logistical problems.

* Russian troops reach the centre of the Black Sea port of Kherson and claim their first capture of a large urban centre. Read full story

* March 3: Russia and Ukraine agree to set up humanitarian corridors for fleeing civilians. A cargo ship sinks near a Ukrainian port hours after another is hit by a blast at another port. Read full story

* March 13: Russia extends its war deep into western Ukraine, firing missiles at a base in Yavoriv close to the border with NATO member Poland. The attack kills 35 people and wounds 134, a local official says. Read full story * March 14: Russian journalist Marina Ovsyannikova bursts into a state TV studio during a live news bulletin, with a banner reading: “NO WAR. Stop the war. Don’t believe propaganda. They are lying to you here.” Read full story

* March 16: Ukraine accuses Russia of bombing a theatre in Mariupol where hundreds of civilians are sheltering. Moscow denies it. Read full story

* March 25: Moscow signals it is scaling back its ambitions and will focus on territory claimed by Russian-backed separatists in the east, as Ukrainian forces go on the offensive to recapture towns outside Kyiv. Read full story

* April 1: Ukraine recaptures more territory around Kyiv from Russian soldiers who leave shattered villages and abandoned tanks as they move away from the capital. Read full story

* April 3/4: Ukraine accuses Russia of war crimes after a mass grave and bodies of people shot at close range are found in the recaptured town of Bucha. The Kremlin denies responsibility and says images of bodies were staged. Read full storyRead full story

* April 8: Ukraine and its allies blame Russia for a missile attack on a train station in Kramatorsk that killed at least 52 people trying to flee the looming eastern offensive. Russia denies responsibility. Read full story

* April 21: Putin declares the southeastern port of Mariupol “liberated” after nearly two months of siege, despite leaving hundreds of defenders holding out inside a giant steel works. Read full story