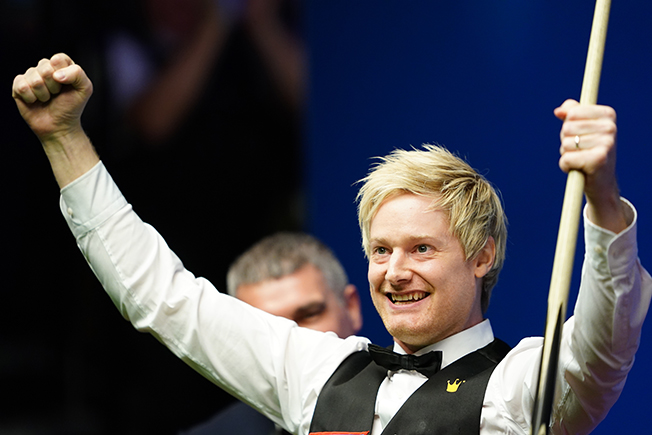 Neil Robertson racked up a maximum break but still crashed out of the World Championship in a final frame defeat to Jack Lisowski.

The pre-tournament favourite achieved the 12th 147 in Crucible history in the 19th frame of the match but it was not enough to prevent his shock 13-12 loss to the tournament’s 14th seed.

Lisowski described his win as “the best of my career” and added: “I gave that everything I had, and to beat the best player in the world who is playing some of the best snooker we’ve ever seen, it just feels like a massive achievement.

“I held it together well out there. There’s a lot of pressure and I kept my cool really well. I missed a few balls but I made a great clearance to take it into a decider, and I finished it off well in the end.”

Lisowski, rated the best current player not to win a ranking event by many, had exceeded expectations by carving out a 9-7 overnight advantage and when he took a scrappy opener to extend his lead to three frames, a major upset looked on the cards.

But the 30-year-old was frequently let down by careless shot choice, and a poor safety in the next let in Robertson to clear the colours and narrow the deficit to two frames.

Robertson followed his 147 with back-to-back breaks of 79 and 60 to take the lead, but when it seemed the momentum had shifted, Lisowski responded again with an 88 to haul an intriguing match back all-square at 11-11.

A shocking missed green in the next again appeared to spell Lisowski’s demise, as Robertson took the frame and established a potentially match-winning lead in the next – only for Lisowski to respond with a stunning 72 to pink to force the decider.

As nerves took centre-stage, both players missed fine opportunities to build a lead but a misjudged safety by Robertson let in his opponent, who held his nerve to pull away and claim a potentially breakthrough victory.

Robertson took some solace from his maximum, insisting: “It just tops the season off because it’s on everyone’s bucket list to make a 147 at the Crucible and my mum was in the crowd as well.”

Defeat for the 40-year-old extended his dismal record at the Crucible, having reached the one-table set up just once since he won his solitary title in 2010.

But he added: “If I only win it once, I’ve had an unbelievable career, I’ve achieved everything I could ever dream of 100 times over.

“The season I’ve had has been the season of absolute dreams. If I’d gone on to win here, it would probably have been the greatest season anyone has had in the sport.

“But Jack played the match of his life. It was an incredible match and it was played in the right way. I’ve got nothing but praise for Jack because he really just handled himself really well.”

Judd Trump, Lisowski’s close friend who clawed through similar drama to beat Anthony McGill 13-11, was the first to pay tribute, admitting: “I am over the moon for Jack.

“I wasn’t sure he believed in himself enough to win that game, but that is a huge, huge win for him and especially to do it in the way he did.”

Despite some stunning pots from the Scot, Trump managed to keep his nose in front and a break of 56 to blue in the 24th frame proved enough to seal a last eight clash with Stuart Bingham.

“Anthony played amazingly but he left himself too much to do,” admitted Trump. “I’m very happy that he didn’t produce that in the first two sessions because on that kind of form you can see why he’s so good here.

“I was praying it wasn’t going to go to a decider. If I’d lost I wouldn’t have taken it well, but I would have come off feeling good and it was one of the best sessions I’ve been involved in.”