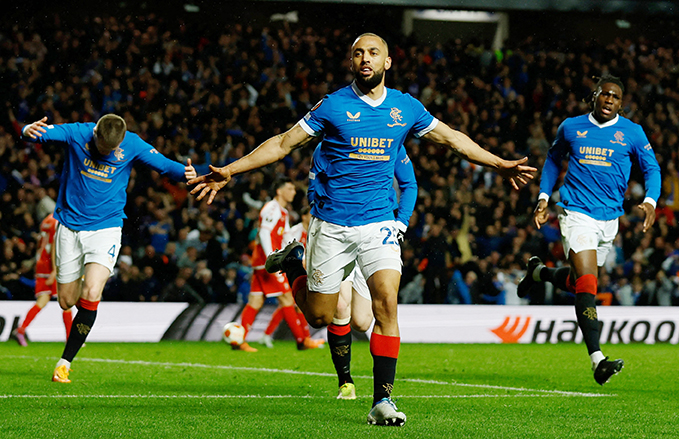 Rangers boss Giovanni Van Bronckhorst has told his players to block all the outside pressures in their bid to reach the Europa League final.

The Light Blues take on RB Leipzig in Germany on Thursday evening in the first leg of their last-four tie, looking to reach the showpiece match for the first time since they finished runners-up to Zenit St Petersburg in the 2008 UEFA Cup.

Former Rangers, Arsenal and Barcelona midfielder Van Bronckhorst, who captained Holland in their 2010 World Cup final defeat to Spain, sees similarities between playing and managing in terms of preparation and knows keeping focused is key.

He said: “Of course it feels different because as a coach you are responsible for the team.

“But what I had as a player, I also have as a coach. You have to concentrate on the preparation for games.

“You have to block all the media, block all the pressure you get from outside to win these legs and just concentrate on your preparation and your performance.

“That’s what the players also have to do – make sure we prepare well, as normal, and when the whistle goes go into the game, give everything you have on the pitch and make sure you have a good result. In that aspect for me it’s no different.”

Van Bronckhorst expressed confidence in his side ahead of the club’s first European semi-final in 14 years.

Rangers have taken care of teams such as Borussia Dortmund, Red Star Belgrade and Braga in their run to the last four and the Gers boss is looking for one last push to make the May 18 final.

“Well, of course we have the belief,” Van Bronckhorst said. “If we are still involved in Europe and in a semi-final and you see the run we’ve had in Europe, then it’s been very good.

“But in the end we need another good performance (on Thursday) and next week.

“The confidence is there but I think also that we know that we have to perform again and everything we achieved in the past doesn’t count against Leipzig.

“We are just preparing well for these two games and I am very confident in my team. I am sure that we can get good performances in and have a chance to make the final.

“Reaching a final is of course very exciting but still we have to overcome the semi-final.

“We have watched Leipzig play a lot of times, we are preparing well for the game, but of course you feel you are coming close to the final.

“It is still two games to be played and we are going to play against a tough opponent.

“But we will do everything we can and give 100 per cent in both legs to be in the final.”

Van Bronckhorst is taking encouragement from the Rangers support expected to arrive in Leipzig over the next two days, with figures as high as 7,000 being reported.

The Dutchman said: “It’s always a factor when you have a lot of fans travelling with you.

“We have had that the whole season when we’ve played abroad. The fan-base who travel with us are amazing. It feels a little bit like playing at home when you are away.

“As for Leipzig, I think it is a very strong team, a very attacking team with a lot of pace up front with the strikers.

“It is a very well organised team, as we have seen with the games they played against Atalanta. We have to prepare well because we are going to play against a very strong team.

“When you play in a semi-final then any team you play is strong, so we just have to prepare well.”