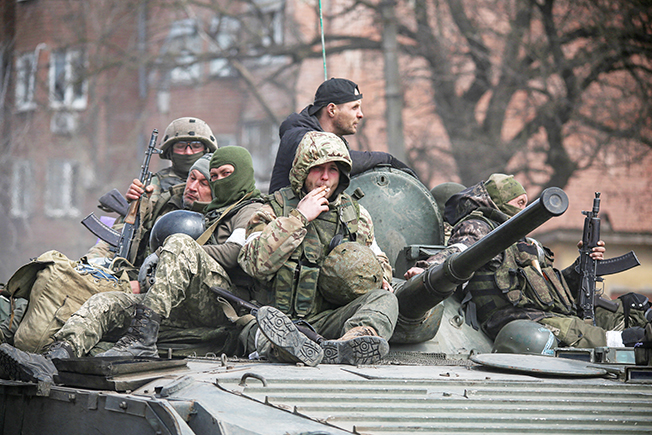 Service members of pro-Russian troops are seen atop of an armoured vehicle in the southern city of Mariupol, Ukraine

Ukraine and Russia traded accusations over shaky talks to end a war now in its third month as Russia pounded areas in the east of the country and U.S. lawmakers vowed a massive new weapons package for Kyiv.

Russian Foreign Minister Sergei Lavrov, in remarks published early on Saturday, said lifting Western sanctions on Russia was part of the peace negotiations, which he said were “difficult” but continue daily by video link.

Ukraine‘s president, Volodymyr Zelenskiy, told Polish journalists that chances were “high” that the talks, which have not been held in person for a month, would end because of Russia’s “playbook on murdering people,” the Interfax news agency said.

Ukraine accuses Russian troops of atrocities in their withdrawal from areas near Kyiv. Moscow denies the claims.

After failing to capture the capital in the nine-week assault that has turned cities to rubble, killed thousands and forced 5 million Ukrainians to flee abroad, Moscow is now focussing on the east and south.

Russian forces captured Ukraine‘s southern city of Kherson and mostly occupied the southeastern port city of Mariupol, where the United Nations is making efforts to evacuate civilians and fighters holed up in a large steel plant.

Lavrov, speaking to China’s official Xinhua news agency, said 1.02 million people had been evacuated to Russia from Ukraine since the invasion began on Feb. 24. Ukraine says thousands have been taken to Russia against their will.

Reuters could not independently verify the claims of either side.

Moscow calls the war a “special military operation” to disarm and “denazify” Ukraine, defend Russian-speaking people from persecution and prevent the United States from using the country to threaten Russia.

Ukraine dismisses Putin’s claims of persecution and says it is fighting an unprovoked land grab to fully capture Donetsk and Luhansk, which form the Donbas region.

Britain and the United States have voiced support for Ukraine in the peace talks but say it is vital to keep arming Kyiv. On Thursday, President Joe Biden asked the U.S. Congress for $33 billion in new aid, more than $20 billion of it in weapons.

The funding has received bipartisan congressional support. House of Representatives Speaker Nancy Pelosi said she hoped to pass the package “as soon as possible”.

Ukraine acknowledges losing control of some eastern towns and villages but says Moscow’s gains have come at a heavy cost to a force already worn down from its defeat near the capital.

“We have serious losses but the Russians’ losses are much, much bigger,” Ukrainian presidential adviser Oleksiy Arestovych said, without elaborating. “They have colossal losses.”

Ukraine‘s military said Russia was preparing for offensives in the areas of Lyman in Donetsk and Sievierodonetsk and Popasna in Luhansk. In the south, it said, Russia was “continuing to regroup, increase fire effectiveness and improve position”.

‘IT CAN’T BE DESCRIBED’

Russia said its high precision long-range missiles had destroyed the production facilities of a rocket plant in Kyiv.

Ukraine says that attack Thursday struck a residential building, injuring civilians and killing a producer with U.S.-backed Radio Free Europe/Radio Liberty. The body of the producer, Vira Hyrych, was found in the building’s rubble, the broadcaster said.

“She was going to bed when a Russian ballistic missile hit her apartment in central Kyiv,” said Ukrainian Foreign Ministry spokesperson Oleg Nikolenko.

Western officials said Russia had suffered fewer casualties after narrowing the scale of its invasion but numbers were still “quite high”, while the British defence ministry said Russian gains had been limited and came at “significant cost”.

The bloodiest fighting and worst humanitarian catastrophe have been in Mariupol, reduced to a wasteland by two months of Russian bombardment and siege. Ukraine says 100,000 civilians remain in the city.

In parts of Mariupol now held by Russian troops, emergency workers were retrieving bodies from the streets. Among the blasted ruins, residents recounted the horror they had survived.

“We were hungry, the child was crying when the Grad (multiple rocket launcher) shells were striking near the house. We were thinking, this is it, the end. It can’t be described,” Viktoria Nikolayeva, 54, who survived the battle with her family in a basement, told Reuters, weeping.

One Ukrainian fighter holed up there was optimistic the injured and other soldiers at the plant could be saved and taken to safety. Previous evacuation efforts have failed.

“I really believe that all the defenders of Mariupol – the troops that remained here, the wounded and those alive – that we will be able to save the lives of these heroes,” said Captain Sviatoslav Palamar.

Our View: The predicament of independent candidates in Cyprus