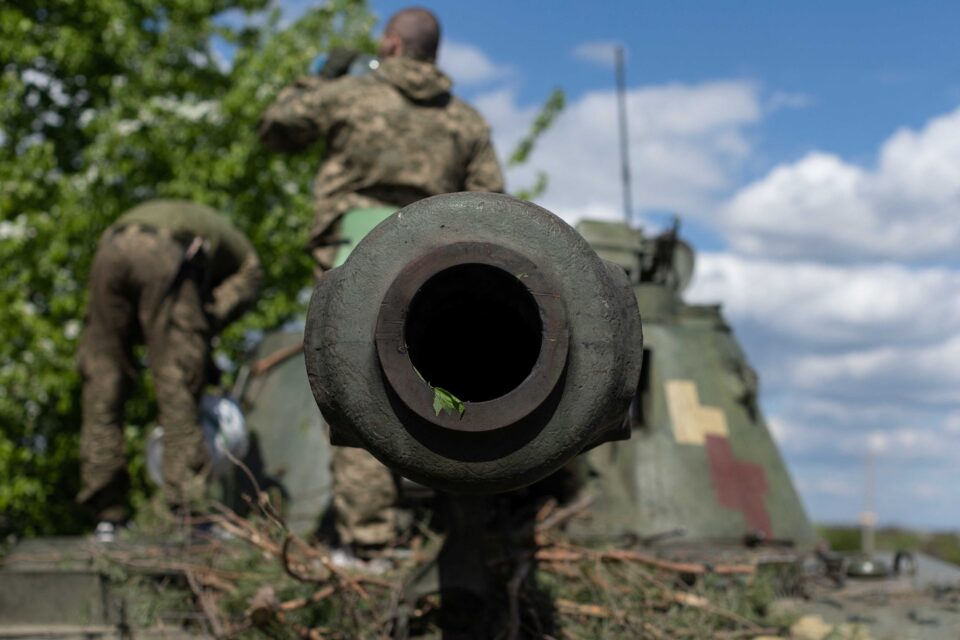 Ukrainian soldiers stand on top of a tank, amid Russia's invasion of Ukraine, in the frontline city of Lyman, Donetsk region

Russia’s ‘special military operation’ for the alleged de-Nazification and demilitarisation of Ukraine has entered its third month with no end in sight. On the contrary, there has been an escalation with the West and Nato, which were unwilling to become involved at the start of the invasion, now openly supplying Ukraine with arms and military training.

The Politico website this week reported that Nato, sooner rather than later, could agree to send fighter planes to Ukraine, something inconceivable a few weeks ago, while President Biden has asked Congress for $33 billion in assistance to support Ukraine, $20 billion of which would be military aid. Even the German government that had been the most reluctant to assist Ukraine militarily will be doing so.

This is the result of the abject failure of the Russian military operation. Had it taken over Kyiv in a few days, when the West was a passive bystander restricting itself to words of condemnation and sanctions, Russia would not now be accusing the US and Nato of waging a proxy war against it. Despite the unrelenting bombing of Kyiv and surrounding areas, Ukraine not only held out but forced Russia to retreat and to drastically change its military objectives. This also gave rise to the view in western capitals that by supplying Ukraine with arms Russia could be defeated.

Commentators in the West have argued that foreign minister Sergey Lavrov’s comment that the risks of nuclear conflict were ‘considerable’ was a sign of weakness rather than strength, a futile attempt to prevent the stepping up of defence assistance by the West, as well as a warning to Ukraine. This may have been a bluff, but the escalation now seems inevitable. According to reports in the Western media, army chiefs were urging President Putin to give up the term ‘special operation’ used for the invasion and declare war which would allow him to announce general mobilisation of the Russian population. Intelligence sources reported this would happen in the next week or two.

Escalation of the war would mean more deaths, more human suffering and more destruction. There are voices in the West arguing against such a move, for this very reason but what would be the alternative? Reward Putin for his murderous aggression, for the atrocities committed by his troops, for causing millions to flee their homes, for the indiscriminate bombing, for the razing of towns and infrastructure? Any peace agreement now would be on Moscow’s terms, formalising the annexation of Crimea and south-east Ukraine, which is where the main war has now moved to. After everything that has happened, Ukraine would never agree to such a deal.

Peace talks, which have been going on through teleconferencing, daily, were on the verge of collapse said Kyiv, although Lavrov said Moscow was in favour of their continuation. The agenda, he told Xinhua news agency, included, among other things, “the de-Nazification, the recognition of the new geopolitical realities, the lifting of the sanctions and status of the Russian language.” In short, Ukraine has to surrender, give in to all the demands of the aggressor, for there to be an end to the war. That these negotiations were being conducted while Russia was bombing Ukrainian cities, was an indication of what Moscow’s intentions were. On Thursday, it fired two missiles into Kyiv during the visit of UN Secretary-General Antonio Guterres, as if to underline this arrogance.

Of course, a peace agreement, now rather than later, would be the ideal outcome, but even the supporters of the war concede that peace would be on Putin’s terms and this is unacceptable to Kyiv and the West where some consider a victory for Russia would be a defeat of the West. This has become a proxy war, as Lavrov has said, but we should not forget who caused it. If Putin did not foresee the consequences and was not prepared for them, it is nobody’s fault but his own. He had banked on easy victory within a few weeks and a disunited West that would have done nothing to help Ukraine other than offer humanitarian help, he was wrong.

Now, Lavrov is saying that if the US and Nato were really interested in a solution to the Ukrainian crisis they should change stance and stop supplying Kyiv with guns and ammunition. This would not stop the fighting but make things easier for Russia as Ukraine would be weakened. Another option would be for the invading troops to withdraw and return to Russia. This would end the death and destruction the invasion has wreaked much sooner and pave the way for a solution the crisis that Russia wants, completely on its terms. Realistically speaking, neither is an option in the current conditions.

We can only express the hope that the unavoidable escalation of the war will not make Putin consider the nuclear option.