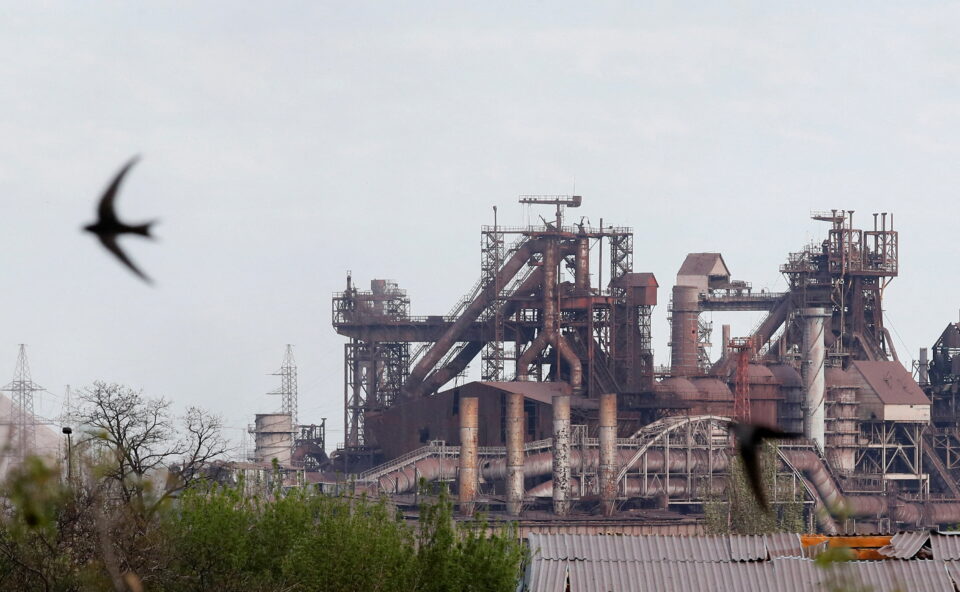 Around 50 Ukrainian civilians reached the relative safety of a temporary camp in Russian-held territory on Sunday after being evacuated from a ruined steelworks in Mariupol, where the United Nations said a “safe passage operation” was in progress.

With fighting stretching along a broad front in southern and eastern Ukraine, U.S. House of Representatives Speaker Nancy Pelosi pledged continued U.S. support for Ukraine when she met President Volodymyr Zelenskiy in an unannounced visit to Kyiv.

Russia said it had destroyed a stock of Western-supplied weapons at an airfield near Odesa, in southern Ukraine.

Mariupol, a strategic port city on the Azov Sea, has endured the most destructive siege of the war, with Pope Francis, in an implicit criticism of Russia, telling thousands of people in St Peter’s Square on Sunday it had been “barbarously bombarded”.

Moscow has turned its focus to Ukraine’s south and east after failing to capture Kyiv in the early weeks of a war that has flattened cities, killed thousands of civilians and forced more than 5 million to flee the country.

In Mariupol, Russia declared victory on April 21 even as hundreds of holdout Ukrainian troops and civilians took shelter in the city’s Azovstal steel works, a vast Soviet-era complex with a network of bunkers and tunnels, where they have been trapped with little food, water or medicine.

Negotiations to evacuate the civilians had repeatedly broken down in recent weeks, with Russia and Ukraine blaming each other.

But on Sunday, more than 50 civilians arrived at a temporary accommodation centre after escaping from Mariupol, a Reuters photographer said.

The civilians arrived on buses at the village of Bezimenne, around 30 km (18 miles) east of Mariupol, where a row of light blue tents had been set up, in a convoy with U.N. and Russian military vehicles.

A spokesperson for the U.N. Office for the Coordination of Humanitarian Affairs said a “safe passage operation” had started on Saturday and was being coordinated with the International Committee of the Red Cross, Russia and Ukraine.

He said no further details could be released so as not to jeopardise the safety of evacuees and the convoy.

Footage posted by Zelenskiy on Twitter on Sunday showed him, flanked by an armed escort and dressed in military fatigues, greeting a U.S. Congressional delegation led by Pelosi outside his presidential office the previous day.

“Our delegation travelled to Kyiv to send an unmistakable and resounding message to the entire world: America stands firmly with Ukraine,” Pelosi, the highest ranking U.S. official to visit Ukraine since Russia invaded on Feb. 24, said in a statement.

Moscow calls its actions a “special military operation” to disarm Ukraine and rid it of anti-Russian nationalism fomented by the West. Ukraine and the West say Russia launched an unprovoked war of aggression.

Western nations have imposed broad economic sanctions on Russia and have been shipping increasing quantities of weapons to help Ukraine defend itself.

Russia’s defence ministry said on Sunday it had carried out a missile strike on a military airfield near the port city of Odesa, destroying a runway and a hangar containing weapons and ammunition supplied to Ukraine by the United States and European countries.

It was unclear if they were referring to the same incident and Reuters could not immediately verify the reports.

In the east, Moscow is pushing for complete control of the Donbas region, where Russian-backed separatists already controlled parts of Luhansk and Donetsk provinces before the invasion.

On Sunday, Kharkiv region governor Oleh Synehubov warned residents in the north and east of the city of Kharkiv to remain in their shelters due to heavy Russian shelling. Reuters could not immediately verify reports of shelling in the area.

Serhiy Gaidai, the governor of the Luhansk region, in a post on social media, urged people to evacuate while it was still possible.

Zelenskiy said in a video address on Saturday night that Russia was “gathering additional forces for new attacks against our military in the east of the country”.

The ministry said civilians had been killed and wounded but gave no further details. There was no immediate response from Ukraine and Reuters could not independently verify the report.

Ukraine’s military said in a bulletin on Sunday that Russian forces were fighting to push north from Kherson to the cities of Mykolayiv and Kryvyi Rih.