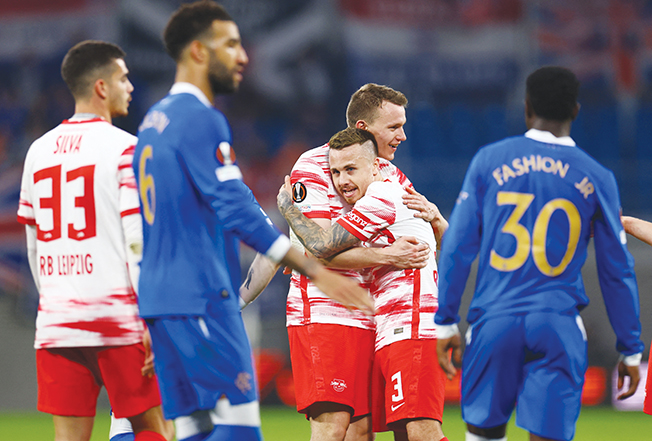 The Glasgow giants are preparing for their semi-final second leg at Ibrox, where they will bid to overturn a 1-0 deficit from the first meeting in Germany

Giovanni van Bronckhorst believes the “character” of his Rangers players will shine through against RB Leipzig on Thursday night as they bid to reach the Europa League final while still mourning the shock death of kitman Jimmy Bell.

The death of the popular and long-serving Bell at the age of 69 was announced by the Ibrox club on Tuesday.

The news came as the Light Blues were preparing for their semi-final second leg at Ibrox, where they will bid to overturn a 1-0 deficit from the first meeting in Germany.

“Yesterday wasn’t about keeping the spirits high, we were all shocked by the news that Jimmy passed away, it was a hard day for all of us,” said the Rangers boss, who will give Kemar Roofe and Aaron Ramsey “as long as possible” to prove their fitness.

“I think everyone was really down as you could imagine, so yesterday we didn’t do a lot.

“We were at the training ground, but the atmosphere was very down and still in shock.

“I don’t think we had the feeling that we had to keep our spirits high.

“We talked about him, we shared the personal stories we had with Jimmy and today we look ahead to Leipzig tomorrow.

“It was a really big game already, but we are all very determined to go out tomorrow to give everything we can to make everyone proud, especially make Jimmy proud.

“We still mourn, we are still down, but the character of my players are the best I have seen in any teams I have coached and I am sure tomorrow that the character, the determination will be there and we will do everything to reach the final.

“Today we are back and we are going to try as prepare as well as possible for tomorrow. I think we will be ready.”

Captain James Tavernier admitted it was a “devastating” time for everyone associated with Bell.

He said: “Yesterday was difficult to take.

“We all mourned Jimmy and obviously people are still doing it now, but I know Jimmy wouldn’t want the fuss.

“He would want us to roll our sleeves up and get stuck in tomorrow.

“We want to do it for the club, for the fans and for Jimmy.”

Van Bronckhorst is hoping his Rangers side of 2022 can be added to that list.

The former Feyenoord boss said: “I am not thinking of personal goals.

“I am thinking about being successful with the club, that is the most important thing.

“There have not been many times that a (Rangers) team has played a final in Europe, so hopefully we will be joining a very elite group and that’s all that matters.

“We are all here to bring success and trophies to this beautiful club and that is always my main target.”

Striker Roofe and on-loan midfielder Ramsey have been out with respective knee and hamstring problems since the Scottish Cup semi-final win over Celtic at Hampden Park last month.

On their availability, Van Bronckhorst added: “It depends how the training will go.

“When they got injured we all knew that they would work towards the game tomorrow.

“Of course I will wait as long as possible, but the most important thing for me is that they are physically able to play a part in tomorrow’s game, that is always the deciding factor.

“We still have one day to prepare. Today will be an important day for both.

“I cannot tell you if they are in the squad for tomorrow or not.”

Police investigate after pensioner duped into handing over €8,500