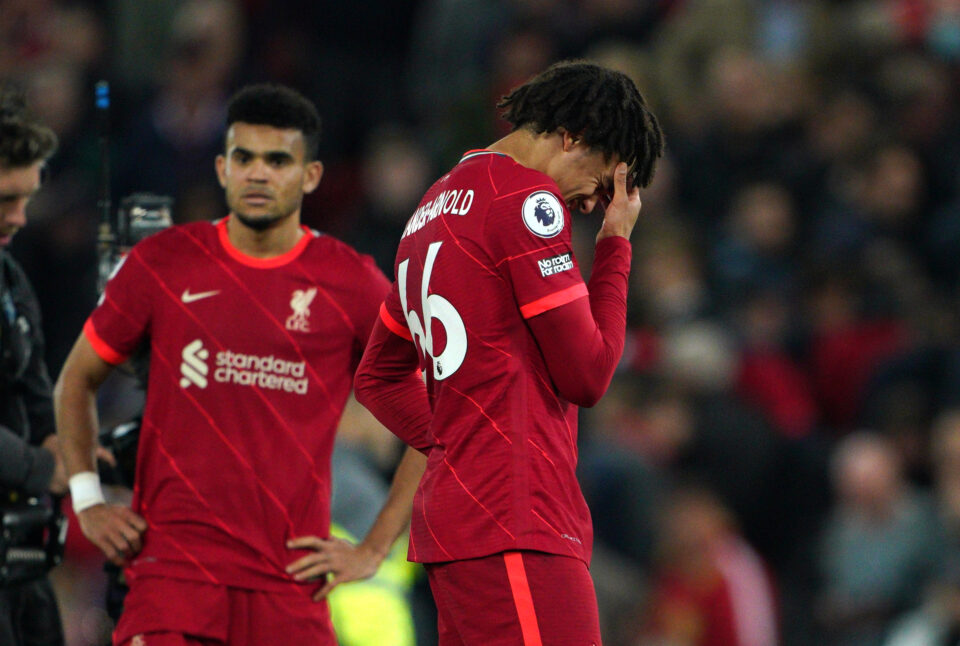 Tottenham blew a huge hole in Liverpool’s Premier League – and quadruple – hopes as Son Heung-min’s 20th goal of the season earned them a 1-1 draw at Anfield to gift the advantage to Manchester City.

Despite Luis Diaz’s 74th-minute equaliser and manager Jurgen Klopp going for broke, knowing he had no other option, the hosts now require their title rivals to lose one of their four remaining matches.

Even though the point took Liverpool top of the table, it was only courtesy of a superior goal difference of one and Pep Guardiola’s side will go three points clear with a win at home to Newcastle on Sunday.

The draw did little for Spurs’ top-four hopes either as they remain a point behind north London rivals Arsenal, who host struggling Leeds a couple of hours before City kick off.

Liverpool’s chances of overhauling City, who have only the title to focus on after their dramatic Champions League exit to Real Madrid in midweek, in this pulsating race were always balanced on a knife edge as they knew one slip-up would probably mean their hopes were over.

Tottenham were seen as the biggest challenge of their remaining four matches and so it proved as Antonio Conte brought a disciplined game plan to Anfield.

The tactics were evident from the off – five at the back, four in midfield, double-up on Mohamed Salah and Diaz and look to hit the space behind their opponents’ full-backs, particularly Andy Robertson.

It was fine in theory, but Liverpool’s recovery of possession was up with the best it has been all season and Spurs barely had a moment’s peace.

The three biggest cheers in the opening 12 minutes were for team combination which retrieved a lost ball, Trent Alexander-Arnold dispossessing Harry Kane down by the corner flag in front of the Kop and Jordan Henderson sliding in to block a Kane shot from a rare Spurs counter.

Tottenham’s plan also relied on them not conceding set-pieces in dangerous areas, but that was easier said than done, with Virgil Van Dijk missing the target with one header from a corner and hitting the crossbar with another late in the half.

Hugo Lloris only just managed to claw away Ryan Sessegnon’s header back across goal with Salah lurking, while the France goalkeeper also got down well to blow a low Diaz effort after a quick exchange with Sadio Mane.

Tottenham’s one effort of any threat saw Pierre-Emile Hojbjerg hit Alisson’s right-hand post from distance, although the Liverpool goalkeeper looked like he had it covered all the way.

But the visitors decided to open the game up in the second half and it paid dividends in the 56th minute when Kane was allowed to run from deep and pick out Sessegnon on the left of the penalty area and his low cross was turned in by Son at the far post.

The South Korean became the fifth different Spurs player to score 20-plus Premier League goals in a season, following in the footsteps of Teddy Sheringham, Jurgen Klinsmann, Gareth Bale and Kane.

Ibrahima Konate flicked a header over as Liverpool continued to squander set-piece opportunities, while being fortunate to escape conceding another when Son diverted wide from close range.

Almost immediately Klopp switched to 4-2-4, replacing Henderson with forward Diogo Jota and introducing the fresh legs of Kostas Tsimikas at left-back for the tired Robertson.

Anfield erupted and, encouraged by the cacophony of noise, the hosts redoubled their efforts.

Conte sent on Davison Sanchez for Sessegnon and later the more defence-minded Harry Winks replaced Dejan Kulusevski, but surprisingly Liverpool did not test Lloris nearly as much as they would have hoped and, as their seconds ticked away, so seemingly did their title hopes.