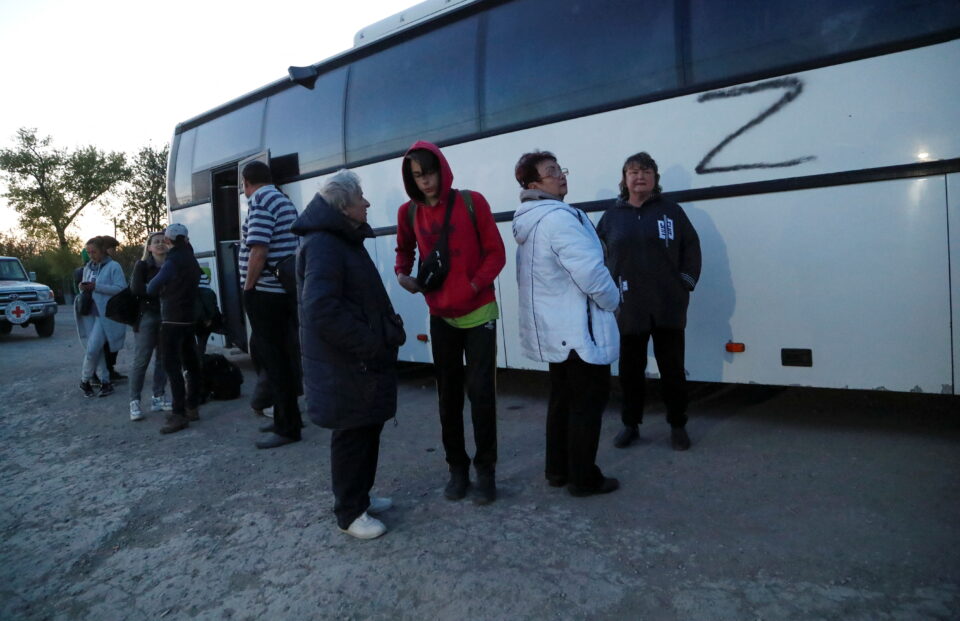 People, who were evacuated from Mariupol in the course of Ukraine-Russia conflict, stand outside a bus near a temporary accommodation centre in the village of Bezimenne in the Donetsk region, Ukraine May 7, 2022. REUTERS/Alexander Ermochenko

Ukrainian fighters at the besieged Azovstal steel plant in the southeastern port of Mariupol, who are the last holdout against Russian forces in the city, vowed on Sunday to continue their stand as long as they are alive.

“We will continue to fight as long as we are alive to repel the Russian occupiers,” Captain Sviatoslav Palamar, a deputy commander of Ukraine‘s Azov Regiment, told an online conference.

“We don’t have much time, we are coming under intense shelling,” he said, pleading with the international community to help to evacuate wounded soldiers from the plant in Mariupol.

Russian forces are seeking to declare a victory in the prolonged battle for the vast plant in time for Monday’s Victory Day celebrations in Moscow, which commemorate when the Soviet Union triumphed over Nazi Germany in World War Two.

The Soviet-era Azovstal steel mill, the last holdout for Ukrainian forces in the key port city, has become a symbol of resistance to the Russian effort to capture swaths of eastern and southern Ukraine in the 10-week-old war.

Meanwhile, evacuation efforts are focused on getting the wounded and medics out of Mariupol’s bombed-out Azovstal steelworks after all the women, children and elderly trapped in the plant were brought to safety, said Ukraine’s President Volodymyr Zelenskiy.

U.S. President Joe Biden and other G7 leaders are to hold a video call with Zelenskiy on Sunday in a show of unity ahead of Victory Day, in which President Vladimir Putin typically inspects a massive military parade in Moscow.

“Putin’s brutal attack is not only causing untold devastation in Ukraine – it is also threatening peace and security across Europe,” Britain’s Prime Minister Boris Johnson said in a statement on Saturday pledging more military aid.

Britain pledged to provide a further 1.3 billion pounds ($1.6 billion), double its previous spending commitments and what it said was the country’s highest rate of spending on a conflict since the wars in Iraq and Afghanistan.

Putin’s Victory Day speech could offer clues on the future of the war he launched on Feb. 24 with an unsuccessful assault on the capital, Kyiv. Russia’s efforts have been plagued by logistical and equipment problems and high casualties in the face of fierce resistance.

U.S. Central Intelligence Agency Director William Burns said Putin was convinced “doubling down” on the conflict would improve the outcome for Russia.

“He’s in a frame of mind in which he doesn’t believe he can afford to lose,” Burns told a Financial Times event.

Other observers suggest Putin may declare “mission accomplished”. Ukraine’s defence intelligence agency has said Kremlin officials are reportedly in Mariupol preparing for a Victory Day parade in the devastated city.

Zelenskiy said in a late night address on Saturday that more than 300 civilians had been rescued from the Azovstal plant and that authorities would now focus on evacuating the wounded and medics, and helping residents elsewhere in Mariupol and surrounding settlements to safety.

Russian-backed separatists have reported 176 civilians evacuated from the plant. It was not clear if civilian men were still there.

Reuters could not independently verify the accounts of either side.

Under heavy bombardment, fighters and civilians have been trapped for weeks in deep bunkers and tunnels crisscrossing the site, with little food, water or medicine. Weeks of Russian bombardment have left Mariupol in ruins. The steel mill has been largely destroyed.

Moscow calls the war a “special military operation” to disarm Ukraine and rid it of anti-Russian nationalism fomented by the West. Ukraine and the West say Russia launched an unprovoked war.

In Kyiv on Saturday, the World Health Organisation said it had documented 200 attacks on healthcare facilities in Ukraine, the latest allegations of war crimes by Russian forces. Russia has denied attacking civilian targets.

Mariupol, which lies between the Crimean Peninsula seized by Moscow in 2014 and parts of eastern Ukraine taken by Russia-backed separatists that year, is key to linking the two Russian-held territories and blocking Ukrainian exports.

Ukraine’s general staff said Russia’s offensive in eastern Ukraine aims to establish full control over the Donetsk and Luhansk regions – where pro-Russian separatists have declared breakaway republics – and maintain the land corridor between these territories and Crimea.

The speaker of Russia’s lower house of parliament, Vyacheslav Volodin, accused Washington of coordinating military operations in Ukraine, which he said amounted to direct U.S. involvement in military action against Russia.

U.S. officials have said the United States has provided intelligence to Ukraine to help counter the Russian assault but have denied this intelligence includes precise targeting data.

Washington and European members of the transatlantic NATO alliance have supplied Kyiv with heavy weapons but say they will not take part in the fighting.

A senior Russian commander said last month Russia planned to take full control of southern Ukraine to improve Russian access to Transdniestria, a breakaway region of Moldova to the west.

Pro-Russian separatists in Moldova said on Saturday that Transdniestria was hit four times by suspected drones near the Ukrainian border.

Ukraine has repeatedly denied any blame for the incidents, saying it believes Russia is staging the attacks to provoke war. Moscow, too, has denied blame.