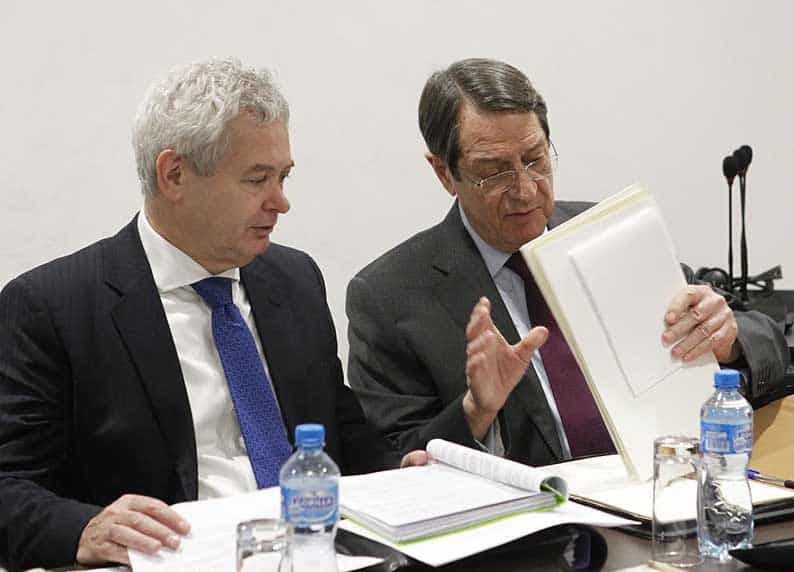 By Antigoni Pitta and Nick Theodoulou

Cyprus cannot continue to perpetuate irrational privileges for state officials, presidential candidate Achilleas Demetriades said on Wednesday, referring to the double appointment of his rival Andreas Mavroyiannis as an ambassador and as Cyprus’ chief negotiator, which had sparked debate on whether he had received two salaries during his appointment.

Earlier in the day, daily Politis obtained cabinet documents and reported that Mavroyiannis received one salary in which his pension was included, disputing Demetriades’ claims that his rival had been receiving a double salary.

In his role as negotiator, Mavroyiannis was entitled to the salary of a director general of a ministry, monthly net €6,097, but that he instead asked for 90 per cent of that amount, therefore €5,487. From that amount however, it is understood that Mavroyiannis waived €1,500 in expense allowances. Politis also stated that if his monthly pension as a former ambassador is subtracted then Mavroyiannis received a monthly sum of €1,500 for his role as negotiator.

Commenting on the findings, Demetriades said that articles in the press still did not address the real issue, which is that his 2019 appointment as an ambassadorr while he still held the negotiator post was a violation of the law stipulating that a state official cannot hold any other position.

“This incongruity is proven, among other things, by the House foreign affairs committee’s report dated July 11 2019, which led then-foreign minister Nicos Christodoulides to admit that Mavroyiannis’ appointment ‘conflicts with article 3 of the 2013 legislation on the appointment of the republic’s chief negotiator’”.

According to Demetriades, Christodoulides himself also admitted that “legalising the cabinet’s decision to appoint Mr. Mavroyiannis….would require basic legislation to be amended”.

In a direct swipe at Mavroyiannis, Demetriades earlier this week called for an end to the lavish privileges enjoyed by some – as the lawyer cited sources that the former Cyprus negotiator received a salary for those efforts, while also another as an ambassador.

The central committee of left-wing opposition party Akel on Sunday voted in favour of Mavroyiannis’ candidacy.

Mavroyiannis, who was the chief negotiator on the Cyprus issue since September 2013 before he resigned in April this year, citing the lack of developments in the negotiations, received 60 per cent of the votes in his favour at Sunday’s meeting.

Meanwhile, President Nicos Anastasiades refused to comment on Akel’s endorsement of Mavroyiannis, telling reporters on Wednesday evening that he has no intention of getting actively involved in the election race to either promote or come into conflict with his close associates.

“Each party has the right through candidacies to make choices it believes will help it implement its agenda,” he said.

Responding to a remark that there was strong criticism from Akel on the way the Mavroyiannis issue was handled, the president said that “it is not an issue that I want to comment on. I know I had an excellent collaboration with an excellent diplomat”.

Call to clamp down on civil servants with private sector links