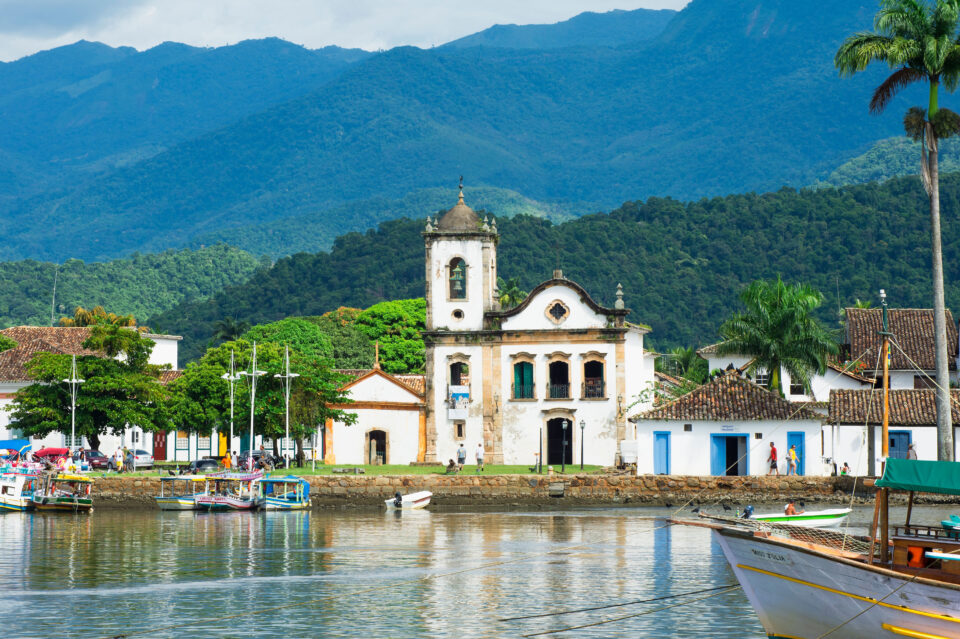 Seeking shelter from a tropical rain shower, I hunker – unsuccessfully – beneath a sprawling jucara palm. Although it provides refuge for up to 62 species, today its feather-thin fronds do little to shield me from the heavy drops.

But the native Brazilian tree champions in many other ways, biologist and guide Samiris Freire assures me on a walk through an agroforest in southwest Brazil. Unlike single stem palms, its edible inner core can be harvested multiple times, while its purple fruits are packed with more antioxidants than superfood acai.

Weird and wonderful ingredients are constantly being discovered in this South American country. But now appreciation of Brazil’s natural riches is extending beyond the Amazon rainforest to focus on neighbouring biomes.

In 2019, the regions of Paraty and Ilha Grande, set midway between major cities Rio and Sao Paulo, were awarded Unesco status for their culture and biodiversity.

A 20-minute drive inland from Paraty, former 17th century sugar cane plantation Fazenda Bananal is one of several ecotourism projects aiming to open visitors’ eyes to the area’s beauty and educate about protecting it for generations to come.

A large portion of the 180-hectare farm, purchased and restored by billionaire Jose Roberto Marinho, vice president of the Globo media group and an active philanthropist, is dedicated to agroforestry – the trending practice of bridging a gap between agriculture and forestry by cultivating vegetables, fruits and trees on the same land.

In contrast to the threat of soya bean monoculture that’s responsible for destroying vast swathes of Brazil’s natural habitat, it champions biodiversity, preserves forests, and provides a more affordable food source for communities.

Although it teems with as many endemic plants and animals as the Amazon, the Atlantic Forest is woefully overlooked, complains Samiris. Largely because an alarming 90 per cent of the tree cover, which once blanketed eastern Brazil, has been lost since the 16th century when the Portuguese arrived.

What remains, however, is impressive and still worth saving.

Walking along a short trail curving around the back of the property, I crane my head to see dozens of bromeliads trailing from treetops. On several occasions I catch glimpses of the Brazilian tanager as his vermilion breast feathers flash like sparks from a fire in the deep, dark canopy.

As Samaris rightly points out: “It’s just like the sea – there’s still so much unknown.”

Ironically, the sea has always played an important role in this region.

Originally inhabited by indigenous Guaianas Indians, Paraty (meaning ‘river of fish’ in the local language) was commandeered by Portuguese explorers in 1597. It rose to prominence almost 100 years later, after becoming a pivotal point in the Rota do Ouro, transporting gold from Minas Gerais and shipping it to Rio and onward to Europe.

Red pillars marking the route still line corkscrew mountain roads into the museum piece port town, where – despite a tumultuous past of rising and falling fortunes, with sugar, coffee and slaves subsequently traded – many of the original pastel-hued stone buildings still exist.

Another throwback from the past is the town’s intentional flooding.

When I arrive at 5pm, a high tide has transformed Party into a mini Venice. Ornate metal pineapples decorating facades – once a symbol of wealth – are reflected alongside towering palms in glassy pools, giving the impression this tropical colonial showpiece is floating on water.

Buildings were constructed slightly lower than sea level, with concave streets to allow water to flow in and sanitise the town, explains local guide Priscila Albernaz Maciel from Paraty Tours. Quite literally, it was a mega means of flushing the toilet.

Although the history of Portuguese presence is well documented, it’s much harder to find evidence of the indigenous and African communities who played an important – and tragic – role in Paraty’s past.

But as the sun disappears, leaving a whisper of mountain folds on the horizon, the town transforms into an outdoor art fair, with local artisans from a nearby quilombo – a community from the African diaspora – selling woven baskets. Their wares are a window into a culture tourists too often inadvertently overlook.

Once a centre of trade and commerce, Paraty now nurtures more creative talents.

In the 1970s, film stars, artists and musicians rediscovered the town, converting buildings into cafés, restaurants, bars and boutique hotels. But a wealthier set, who have moved in more recently, hole up in private homes around the bay.

Strolling past heaving party vessels moored up along the jetty, I step aboard Latitude, a former fishing boat skippered by sailing veteran Andre Soares.

During our five-hour day trip along the coastline of the Serra da Bocaina National Park, I explore secret bays backed by mountains smothered with broccoli florets of jungle, and weave through islands owned by Brazil’s ever-increasing number of billionaires.

At Jurumirim, I swim through jade-green waters, watching turtles surface for air in the mangroves, and rest on an empty beach strewn with pink hibiscus flowers. On hilltops above me, where crumbling forts once defended the coastline from invading, gold-hungry pirates, several well-preened gentlemen are playing golf.

Before heading back to town, we drop anchor outside a private island, where a wealthy philanthropist has been granted a government licence to breed a population of highly endangered golden lion tamarin monkeys.

As frigate birds soar like arrows overhead, the palm-sized, ginger-maned creatures, which once widely roamed the Atlantic Forest, scamper into view.

Sitting silently, I daren’t breathe for fear of scaring them away. Worth more than any precious metals, they are a poignant indication of where Paraty’s future fortunes lie.