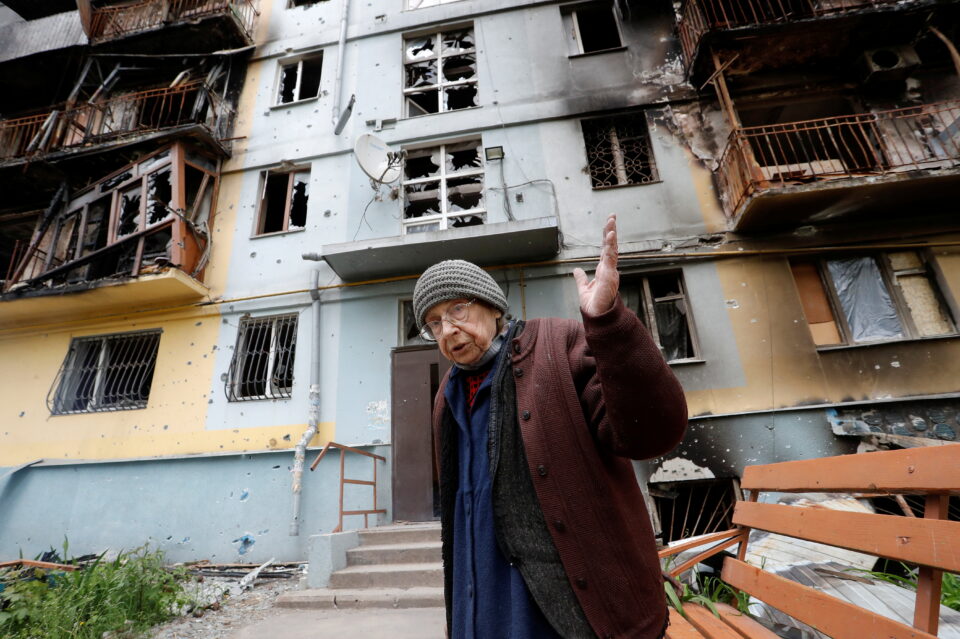 Local resident and music teacher Natalya Lebed, 74, speaks in front of a block of flats damaged during Ukraine-Russia conflict in the southern port city of Mariupol, Ukraine May 11, 2022. REUTERS/Alexander Ermochenko

In his speech on Victory Day over Nazi Germany on May 9, Russia’s President Vladimir Putin claimed that he attacked Ukraine in preventive self-defence, a concept about which Russia and the US agree but which is wider than pre-emptive self-defence as commonly understood in customary international law.

It was an emerging defence that stalled when the Americans tried to pass it off to the international community in 2002 after the attack on the twin towers on 9/11 and shortly before the US and Britain attacked Iraq in 2003.

In its 2002 National Security Strategy policy document, the Bush administration conflated pre-emptive and preventive war. The new strategy stated that “to prevent hostile acts by our adversaries, the US will if necessary act pre-emptively”. But pre-emption in international law presupposes incontrovertible evidence of an imminent and overpowering attack, whereas a preventive attack is done to forestall what a state believes is an inevitable war. It was rejected by the UN because it seriously undermines the prohibition of the use of force to settle international disputes.

The British defence minister rubbished Putin’s speech, but he did not read it carefully and I doubt he compared it with America’s 2002 National Security Strategy. Putin’s national security rationale is not that it is consistent with the UN Charter, but rather that it is comparable to that of the US in 2002 – basically that as a superpower Russia too is entitled to prevent hostile acts preemptively.

Here’s what Putin said about his attack on Ukraine: “everything indicated that a clash with the neo-Nazis backed by the United States and their junior partners, was inevitable. We saw military infrastructure being ramped up, hundreds of military advisers working and regular deliveries of modern weapons from Nato. The level of danger was increasing every day. Russia preventively rebuffed the aggressor. It was necessary, timely and right.”

I am sure the teenage Putin hit first and survived the backstreets of Leningrad and earned his blackbelt in martial arts. The point he was making in 2015 and again in 2022 is that, as the grown-up president and commander in chief of the Russian Federation, he believes in striking first preventively if a fight is inevitable rather than that an attack is imminent.

Pre-emptive or anticipatory self-defence, as it is known in the jargon, is not covered directly by article 51 of the UN Charter, which provides for the right of self-defence in the event of an armed attack only; it is however covered indirectly because article 51 preserves the inherent right of pre-emptive self defence in customary international law where the threat is “imminent and overwhelming”.

The state most associated with pre-emptive strikes is Israel. For example, in the six-day war of 1967 Israel attacked Egypt pre-emptively and took out the entire Egyptian Air Force because Egypt was gearing up to attack Israel. However, as you are not supposed to gain territory when you attack in self-defence and Israel acquired a lot of territory in 1967, her otherwise strong claim to have acted in pre-emptive self-defence has not been universally accepted.

According to Professor Rosalyn Higgins QC in her book International Law and How We Use It, article 51 does indeed import a wider right of self-defence that includes anticipatory self-defence where necessary if a state has no choice but to hit first to “avert potentially devastating consequences”. She argues, persuasively, that it is not realistic for international law to “require a state passively to accept its fate before it can defend itself”.

In national law if you genuinely believe that an attack on you is imminent, you are entitled to use reasonable and proportionate force to defend yourself before you are attacked, if you have no other means to avert an attack. You do not have to wait until you are actually attacked.

Pre-emptive self-defence is a complete answer to a charge of assault causing any physical injury including the death of the victim, provided you believe it is necessary to use force against imminent attack and the amount of force is reasonable and proportionate in all the circumstances including the physical strength of the combatants.

The relative strength of the combatants is also a relevant factor in international law although it is also recognised that a less powerful but less responsible entity such as a terrorist organisation prepared to use weapons of mass destruction poses a real threat above its size and strength.

Putin’s claim is not that Ukraine is a terrorist state but that, although it is much less powerful than Russia, it was primed by Nato to fight Russia right in her backyard to regain Donbas and Crimea.

The jury is out on what Nato was up to in Ukraine before Russia invaded. The evidence from outlets in the West like the BBC World Service did not suggest that Russia was in imminent danger of being attacked by Ukraine last February. Said evidence showed the contrary. An attack was indeed imminent, but it was on Ukraine by Russia and, had Ukraine struck first and taken out the Russian troops amassed on its borders, it would ave had a strong case that it acted in lawful pre-emptive self-defence.

In the event Putin struck first, which is ironic because the ensuing war killed a lot of people, destroyed livelihoods and communities and cities, but to no tactical or strategic advantage to Russia for having struck first.

So the riposte to Putin’s policy inspired by his teenage years in the streets of Leningrad is, as the song popular in my student days in London tells it, “let me take you by the hand and lead you through the streets of London, show you something make you change your mind.”

Alper Ali Riza is a queen’s counsel in the UK and a retired part-time judge.

Working in the metaverse: what virtual office life could look like