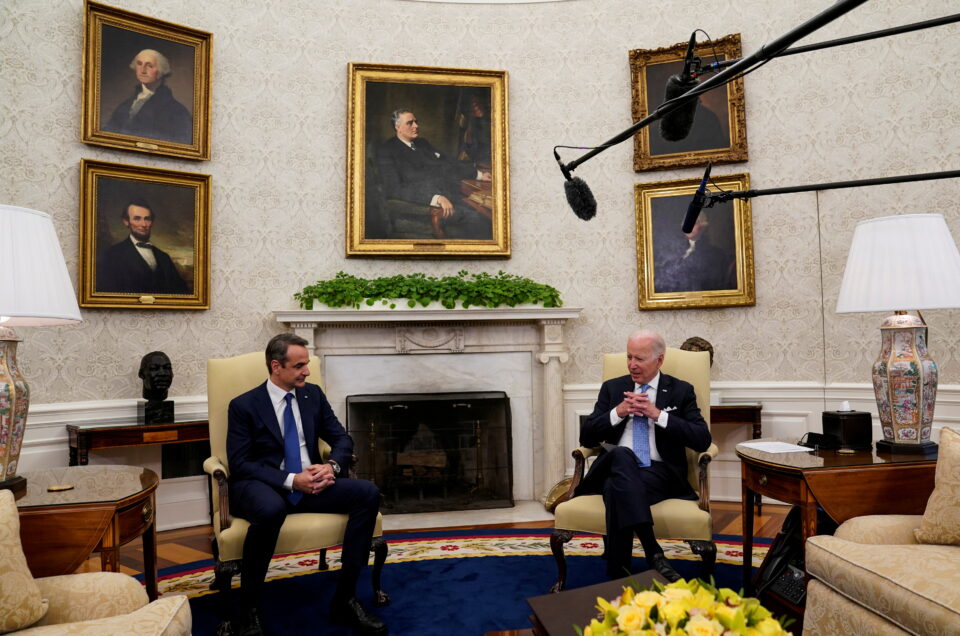 The Cyprus issue was raised during a meeting at the White House on Monday between Greek Prime Minister Kyriakos Mitsotakis and US President Joe Biden, President Nicos Anastasiades said on Tuesday, adding that he was completely satisfied.

Asked if he was briefed about the meeting’s contents, Anastasiades said, “First, I’m absolutely satisfied, because the prime minister after the coordination we had during my recent visit to Athens, raised the Cyprus problem and raised issues that disrupt peace or pose a threat the region. Of course, I will be informed as soon as the Prime Minister returns.”

Asked if Mitsotakis conveyed any message to Biden on his behalf, the president said the Greek premier had conveyed the determination to work for a solution, based on UN resolutions and EU principles and values, adding that the opportunity was brought on by “the violation of international law with the same pretexts as Turkey used during the invasion of 1974,” – a reference to Russia’s invasion of Ukraine.

Earlier, the Cyprus News Agency reported that among the issues discussed by Mitsotakis and Biden was the purchase by Greece of F-35 aircraft by 2030.

According to Greek government sources, the Greek side is quite satisfied with the first day of the prime minister’s visit, it added.

US President Biden stated that Greece-US relations are at their best and Greece is a pillar of stability in the wider Mediterranean region.

According to diplomatic sources, Greece is looking to make a long-term investment and will proceed with the purchase of fifth-generation F-35’s after 2028.

Mitsotakis also asked for the involvement of the US in the Cyprus problem, stating that no one can accept a two-state solution, suggested by the Turkish side. He also spoke about regional issues concerning Turkey in the context of developments in the Eastern Mediterranean.

The meeting of the two leaders also raised the issue of Turkish provocation and overflights and stated that “expansion and revisionism have no place in a global landscape that has become more complex after Ukraine.”

Gas was another issue discussed by Mitsotakis and Biden, namely the idea of ​​a ceiling, something that will be done in coordination with the United States, while in the first phase a first coordination is done at the level of the European Commission.

Regarding the East Med pipeline, Mitsotakis expressed the desire for Greece to be a gateway for natural gas from the Eastern Mediterranean, while stressing that Greece could supply Ukraine with natural gas.

The meeting with Biden at the White House was preceded by Mitsotakis’ visit to Georgetown University, where he said Greece is seeking a close strategic partnership with the United States and referred to Greece as an entry point for energy in Europe, among other things, stressing that the goal is not to isolate Turkey.

“The US realises who its credible allies are. Our goal is not to isolate Turkey because it will always be there. It’s our geographical destiny, but we are trying to find ways to bring it closer,” Mitsotakis said.