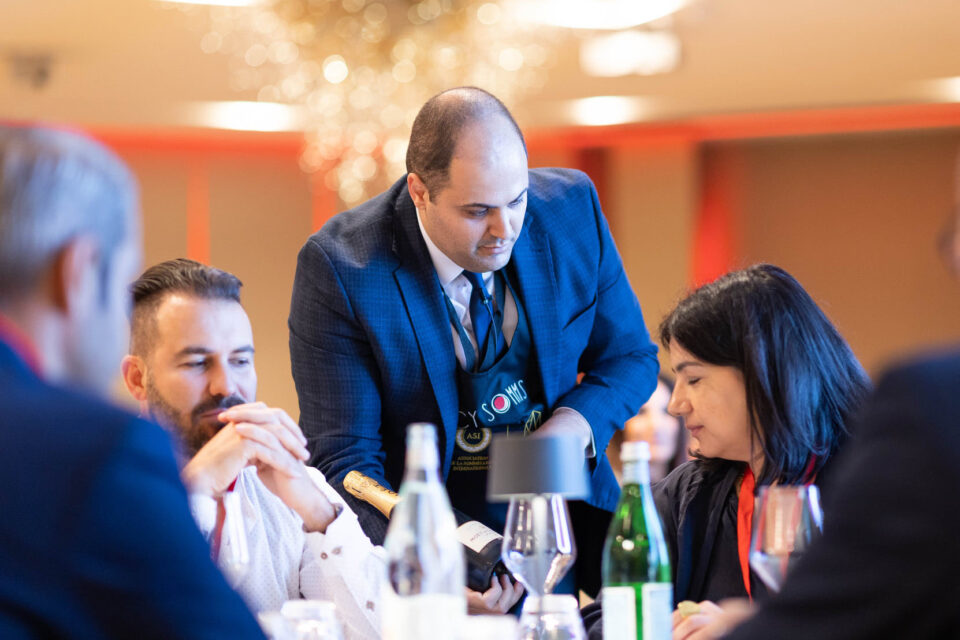 Freelance Sommelier Sotiris Neophytidis has won the 9th Best Sommelier of Cyprus for the year 2022. The contest was held under the auspices of the International Association of Sommeliers, ASI.

Sotiris won after beating Four Seasons sommelier Iwona Hereda and Aphrodite Hills’ sommelier Lazlo Kovacs in a close fought final at the Four Seasons hotel on May 5. Four years ago, Sotiris was the third runner up.

Iwona was placed second, while Lazlo was third in this year’s contest, organised by the Cyprus Sommelier Association in cooperation with, Somms Cy Ltd, Kyperounda Winery and Moët Chandon as the main sponsors.

“It has been an amazing journey. I would not have imagined something like this a few years ago. I would like to thank my family, my friends and team because without them I would not be here. It has been a great learning process,” father of two Neophytidis said. He has recently become an Advance Master Sommelier, the ‘Green Pin’ of the Court of Master Sommeliers.

On the first day of the contest sommeliers completed a hard written test, a blind tasting of two wines and identifying two spirits. They then had a practical test involving checking preparation for red wine pre-ordered by guests and serving a half bottle of Moët Chandon. The seven were whittled down to final three, who competed in the grand final on the following day in the Four Seasons Ballroom.

They were submitted to a grilling three-hour competition in front of an audience of invited guests and a judging panel chaired by Technical Committee Director of the Cyprus Sommeliers Association Vasos Manoli.

As part of the competition the finalists were required to inspect a wine list and identify a number of errors (not in spelling or pricing); identify and provide a sensory analysis of four Xynisteri wines from the various PDO regions of the island and then matching the four wines with food; undergo a blind taste test of two sweet wines where apparently one was Barley Wine a term used for sweet beer and the other a Port; as well as describing and identifying three spirits, which apparently were Hennessy Cognac VS, VSOP and XO. The three candidates were asked to serve a Morokanella only to find out that it was not in stock and they nearest to this variety was Vasilissa and serve a Moët & Chandon Champagne and prepare a Champagne cocktail, the original recipe of 1855. The only problem was the “faulty” angostura bottle that instead of drops was splashing angostura in the glass. This was an extra challenge. The new task this year was to match several different Zivanias with a meze menu of traditional recipes informing of the reasons they choose each for the food match, also advising the order of service, the glassware chosen and the temperature.

Each of the finalists showed different strengths but the judges, including six previous national contest winners, and other members of the Cyprus Sommelier Association, chose Neophytidis as the overall winner. Having won, he will represent Cyprus in the ASI Contest of the Best Sommelier of the World in February in Paris, France.

The 9th National Competition was organised by the Cyprus Sommelier Association and recognised by the Association de la Sommellerie Internationale (ASI). They seek to find the best wine waiter or sommelier based on wine and spirits knowledge, and front of house beverage skills.

The evening ended with candidates, judges and guests enjoying a five-course menu at The Private Room of Four Seasons, the menu matched with wines from Kyperounda Winery.

Akti means shore in Greek, the point where sea meets land and the Lefkada grape (80%) meets Mavro to make this popular rosé. Pale salmon colour, a luscious, aromatic rosé of raspberries and wild strawberries, pink grapefruit freshness and sweet spices with delicate herbaceousness. Effusive, fresh and bright on the palate, well-balanced, soft with bright acidity and a spicy lingering finish. €16

What to say about this treasure? Beautiful deep gold colour, it is superb, delicate, toasty and robust and has evolved aromas of nuts, coffee, toast, gunpowder, apple and flowers. Excellent acidity to balance the toastiness, medium to full body, herbs, pastry and honey dominate. This is firm, concentrated and has great complexity. A blend of 51% Chardonnay, 26% Pinot Noir and 23% Pinot Meunier. €140

The fruit is sourced from Paphos. It has a straw yellow colour with golden hues, honeysuckle, crisp green apple, persimmon, white fig and pear with notes of blanched almonds, vanilla and flowers. On the palate, juicy pineapple and mango, some yellow apple, papaya and honey followed by hints of lemon custard and toasted almond. Brilliant acidity, medium bodied and smooth creamy finish. Complex and well-balanced with a lovely oaky finish. €14

Deep, dense and garnet Shiraz aged in American oak for nine months, lush plums and black cherry fruit, with pepper, spice, vanilla and mocha to greet the nose. On the palate the wine is dense and redolent of blackberry, plum and cherry, laced with licorice and cocoa. €14

An unfortified, Xynisteri sourced from Ayios Constantinos village, one of the 14 villages in Commandaria region. Fully mature grapes are dried in the sun for 12 days. This markedly concentrates sugars, flavour compounds and acids. A slow, cool fermentation follows in stainless steel tanks. The wine is matured in used 225 litre French oak barrels (formerly used to mature their Chardonnay and Petritis Xynisteri) for six years. Amber colour, look for aromas and flavours of caramel, raisin, honey, dry figs and apricot, grape preserve and some notes of cacao and milk chocolate. €28

TV shows we love: The Principles of Pleasure