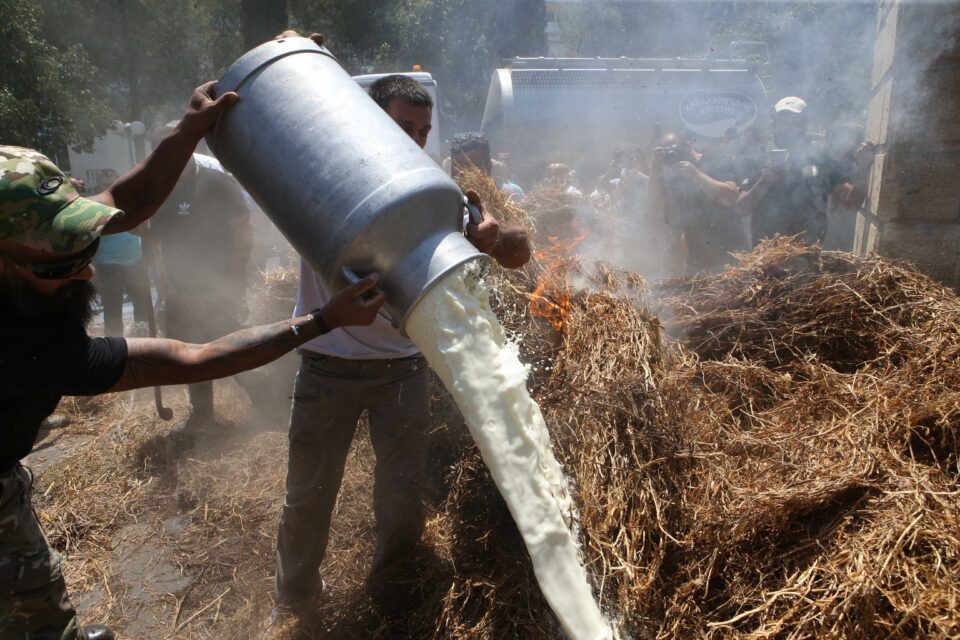 By Nick Theodoulou and Gina Agapiou

Sheep and goat farmers lit fires, dumped gallons of milk and blocked roads outside the presidential palace, later cutting access to key traffic arteries as they protested the handling of the halloumi PDO.

The boisterous demonstrations in the capital on Wednesday morning spilled over into the afternoon, where farmers’ trucks were used to block access to the Kalispera traffic lights, just before the highway, causing kilometres-long queues. They later made their way to the agriculture ministry and issued stern ultimatums, threatening to cut deliveries unless they are paid more by producers.

The demonstration comes a day after Agriculture Minister Costas Kadis said sheep and goat farmers are “in a very difficult situation” as milk is sold cheaper than the production cost.

Tensions peaked as the driver of a truck seemingly threated to smash through the gates to the presidential palace, halting just inches away as police in riot gear stood their ground.

Livestock breeders belonging to different farmers’ organisations together with their families, including children, gathered outside the presidential palace at 11.30am to request the immediate implementation of the EU’s Product of Designated Origin (PDO) legislation concerning specified quantities of sheep and goats’ milk in the production of traditional halloumi cheese.

“We’re asking for nothing more than the implementation of the law which the government itself brought in,” one farmer called out, exasperated.

The group met at the parking of GSP stadium from where they drove to the presidential palace to submit a relevant memorandum with their demands.

There they poured large quantities of milk from milk churns or by using hoses straight out of the tanker outside the entrance. Some also set fire to bales of hay, just in front of the gate to the presidential palace, that were extinguished by the fire service.

“The whole situation right now shows that it reached the verge of despair, and the state must support these people at any cost,” a protestor told the media.

Later in the day, demonstrators made their way to the agriculture ministry where a number of protesters were admitted to discuss their grievances.

Kadis later emerged, telling the remaining gathered protesters and media that he understood their plight, but disagreed with their methods of demonstration.

“The ministry and myself personally have taken every possible action on the matter of halloumi,” he said, admitting that procedures were not currently working as intended.

He explained that from October 1 checks were set to be carried out on the production of halloumi, ensuring that the standards are being met, and said that the mechanism is ready and working. He emphasised that the issue is of key producers not having yet signed up to make PDO halloumi.

For their part, one group of demonstrators threatened that they will halt deliveries to producers unless they are paid more by June 1.

Some of the farmers have claimed that so-called halloumi producers are importing cheese from abroad, slightly altering or, in some cases, simply repackaging the cheese and then selling it on as halloumi in domestic markets.

Another demonstrator said the state is giving them crumbs to survive.

“Pigeons are in a better situation than us,” he said.

Demanding to see the president, protestors said animal feed prices saw a 115 per cent increase, however, sheep and goat farmers were not receiving more money for milk from cheese producers.

Livestock farmers also warned that given the large increases in oil, electricity, fertiliser and consumables, it is only a matter of days before their livestock units close.

Tempers flared when the director of the president’s office Andreas Iosif came out and recommended patience to the demonstrators regarding the halloumi PDO, saying the issue is at the legal service.

“The President of the Republic understands the difficult position you are in,” he said on behalf of the president, as he reiterated the previously announced measures for the financial support of livestock breeders.

Until the end of the month, goat and sheep farmers will receive a total of €5 million while another €3m will be distributed to other livestock sectors.

He added that on the president’s instructions, the agriculture minister will ask for additional aid for livestock breeders during the EU ministers meeting in Brussels.

Michalis Litras of the Pancyprian farmers’ union blamed the officials and authorities across the board, from the president to his ministers, saying that the situation is so dire that those in the industry are just days away from giving up.

On Tuesday, the issue concerning the implementation of Halloumi PDO was discussed in parliament, with Agriculture Minister Costas Kadis saying that recent checks by commerce ministry officers showed that certain samples deviated from the relevant decree laying down the specifications for the halloumi production.

In these cases, he said, what is provided for in the legislation will be applied and the penalties that can be imposed are up to €150,000, depending on the case.

The agriculture ministry said it will collaborate with the ministry for commerce to carry out checks, while it also provided the state laboratories with services and funds to check whether the content of halloumi products are being made with powder milk which is not in keeping with the PDO.

Kadis said although milk is sold cheaper than the production cost, halloumi prices remained the same.

“Unfortunately, it is common knowledge that prices are set by the cheese dairies, so sheep and goat farmers will get what the cheese makers give them,” he said.

Milk production costs for sheep and goat farmers are close to €1.50 per litre, but milk is sold at €1.20 per litre, he added.

Nicosia CID is investigating to identify those who lit up fires during the protest, a police spokesman told the Cyprus Mail. 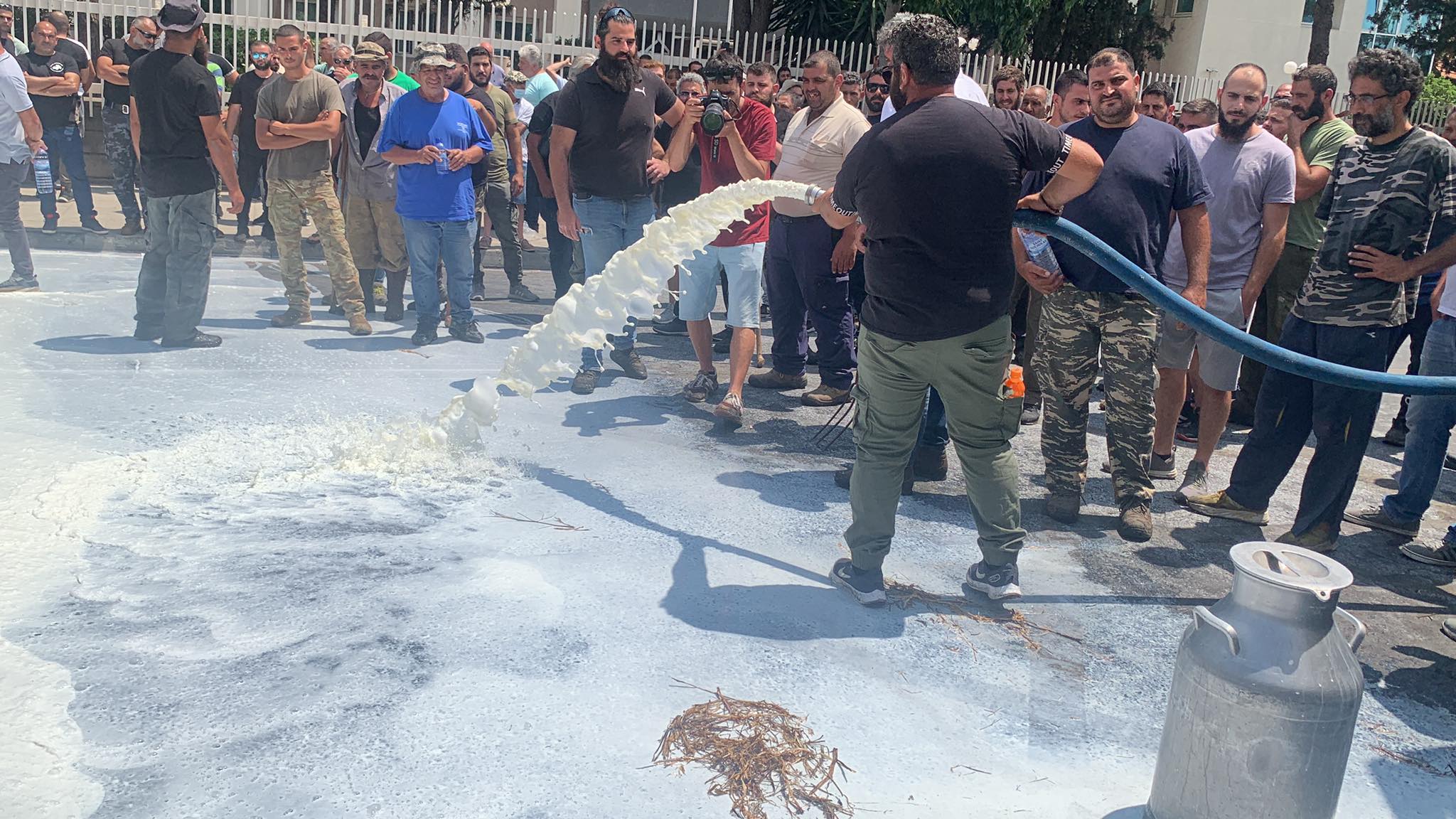