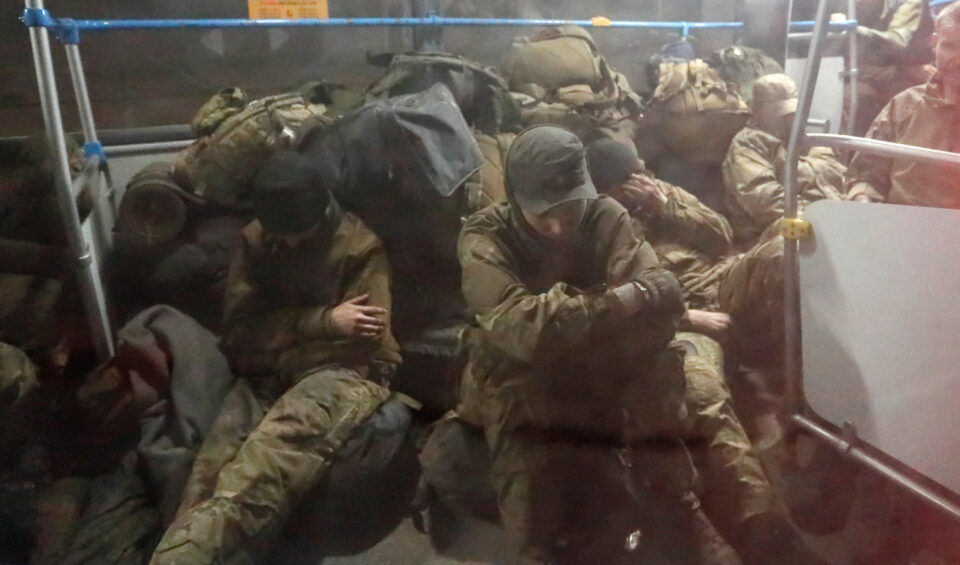 Service members of the Ukrainian armed forces, who surrendered at the besieged Azovstal steel mill in Mariupol

Russia stopped delivering gas to Finland in an escalation of a dispute over energy payments with Western nations, and claimed victory in a weeks-long battle for Mariupol’s devastated Azovstal steel plant as it presses for control of the Donbas.

Russia also launched what appeared to be a major assault to seize the last remaining Ukrainian-held territory in Luhansk, one of two provinces that make up the southeastern Donbas region: where Russian-backed separatists already controlled swathes of territory before the Feb. 24 invasion.

The last Ukrainian forces holed up in the Azovstal steelworks surrendered on Friday, Russia’s defense ministry said, ending the bloodiest siege of the war.

The ministry said in a statement that 2,439 defenders had surrendered in the past few days, including 531 in the final group.Read full story

Earlier, Ukrainian President Volodymyr Zelenskiy said Ukraine‘s military had told the last defenders at the steelworks they could get out and save their lives. The Ukrainians did not immediately confirm the figures on Azovstal.

Ukraine‘s General Staff of Armed Forces did not comment on Russia’s claim in its morning update on Saturday.

The end of fighting in Mariupol, the biggest city Russia has captured so far, gives Russian President Vladimir Putin a rare victory in the invasion after a series of setbacks in nearly three months of combat.

Zelenskiy told local television that while the fighting would be bloody and victory difficult, the end would only come through diplomacy.

“For them, all these victories – the occupation of Crimea or Donbas – is very temporary. And all this will return – since this is our territory,” he said on Saturday.

Full control of Mariupol will give Russia command of an overland route linking the Crimea peninsula, which Moscow seized in 2014, with mainland Russia and areas of eastern Ukraine held by pro-Russia separatists.

The Red Cross said it had registered hundreds of Ukrainians who surrendered at the Mariupol steel plant as prisoners of war and Kyiv says it wants a prisoner swap. Moscow says the prisoners will be treated humanely, but Russian politicians have been quoted as saying some must be tried or even executed.

Meanwhile, Russia’s Gazprom GAZP.MM halted gas exports to neighbouring Finland on Saturday after it refused to agree to Russian demands to pay for Russian gas supplies in roubles because of Western sanctions imposed over the invasion of Ukraine. Read full story

The move comes days after Finland and Sweden decided to apply to join the NATO military alliance, a decision spurred by the Ukraine war.

Finnish state-owned gas wholesaler Gasum, the Finnish government and individual gas consuming companies in Finland have said they were prepared for a shutdown of Russian flows and that the country will manage without.

Most European supply contracts are denominated in euros or dollars and Moscow cut off gas to Bulgaria and Poland last month after they refused to comply with the new payment terms.

In addition to trying to isolate Russia through sanctions, Western nations have stepped up weapons supplies to Ukraine since the invasion. Kyiv got another huge boost on Saturday when U.S. President Joe Biden signed a bill to provide nearly $40 billion in military, economic and humanitarian aid to the country.Read full story

Moscow says Western arms deliveries for Kyiv, and the imposition of drastic sanctions amount to a “proxy war” by the United States and its allies.

Reuters could not independently verify the report, which also said Russian missiles had struck fuel storage facilities near Odesa on the Black Sea coast and shot down two Ukrainian Su-25 aircraft and 14 drones.Read full story

Putin says Russian troops are engaged in a “special military operation” to demilitarise Ukraine and rid it of radical anti-Russian nationalists. Western countries call it an unprovoked war of aggression.

Thousands of people in Ukraine have been killed and urban areas have been shattered in the war. Almost a third of Ukraine‘s people have fled their homes, including more than 6 million who have left the country.

Russia, which announced in late March it was focusing its military efforts on taking control of Donbas, launched what appeared to be a major assault to seize remaining Ukrainian-held territory in Luhansk.

Luhansk regional governor Serhiy Gaidai said in a social media post early on Saturday that Russia was trying to destroy the city of Sievierodonetsk, with fighting taking place on the outskirts of the city.

“Shelling continues from morning to the evening and also throughout the night,” Gaidai said in a video post on the Telegram messaging app.

Despite losing ground elsewhere in recent weeks, Russian forces have advanced on the Luhansk front.

The city of Sievierodonetsk and its twin Lysychansk across the Siverskiy Donets River form the eastern part of a Ukrainian-held pocket that Russia has been trying to overrun since mid-April after failing to capture Kyiv.