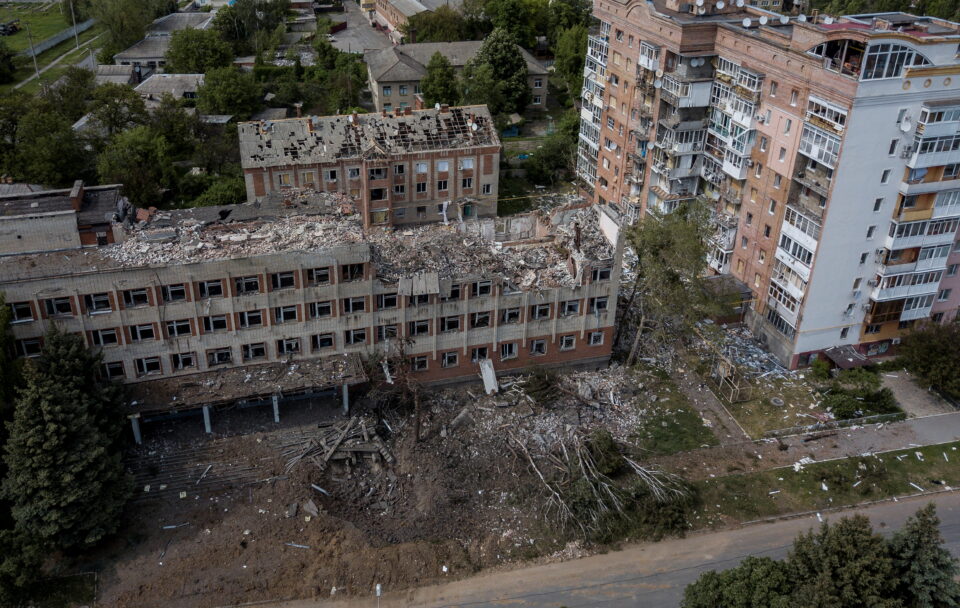 Ukraine ruled out a ceasefire or any territorial concessions to Moscow while Russia stepped up its attack in the eastern Donbas region and stopped sending gas to Finland in its latest response to Western sanctions and its deepening international isolation.

Polish President Andrzej Duda told lawmakers in Kyiv that the international community had to demand Russia’s complete withdrawal from Ukrainian territory and that sacrificing even an inch of it would be a “huge blow” to the entire West.

“Only Ukraine has the right to decide about its future.” Shortly after he finished speaking, an air raid siren was heard in central Kyiv, a reminder that the nation remained at war even as the front lines have shifted hundreds kilometres to the south and east.

After ending weeks of resistance by the last Ukrainian fighters in the strategic southeastern port of Mariupol, Russia is waging a major offensive in Luhansk, one of two provinces in Donbas.

Russian-backed separatists already controlled parts of Luhansk and the neighbouring Donetsk province before the invasion, but Moscow wants to seize the remaining Ukrainian-held territory in the region.

The Russian defence ministry said on Sunday its forces pounded Ukrainian command centres, troops and ammunition depots in Donbas and the Mykolayiv region in the south with air strikes and artillery. Read full story

The cities, separated by the Siverskiy Donets River, form the eastern part of a Ukrainian-held pocket that Russia has been trying to overrun since mid-April after failing to capture Kyiv and shifting its focus to the east and south of the country.

Reuters was unable to independently verify those battlefield reports.

Ukraine’s lead negotiator, speaking to Reuters on Saturday, ruled out a ceasefire that would involve Russian forces remaining in occupied areas or any deal with Moscow that involved ceding territory. Making concessions would backfire because Russia would hit back harder after any break in fighting, President Volodymyr Zelenskiy’s adviser Mykhailo Podolyak said. Read full story

“The war will not stop. It will just be put on pause for some time,” Podolyak said in an interview in the heavily guarded presidential office. “They’ll start a new offensive, even more bloody and large-scale.”

The end of fighting in Mariupol, the biggest city Russia has captured, gives Putin a rare victory after a series of setbacks in nearly three months of combat.

The last Ukrainian forces holed up Mariupol’s vast Azovstal steelworks have surrendered, the Russian defence ministry said on Friday. While Ukraine has not confirmed all its forces have left, the commander of the Azov regiment, one of the units in the factory, said in a video that Ukraine’s military command had ordered the forces in Mariupol to stand down in order to preserve their lives.Read full story

Full control of Mariupol gives Russia command of a land route linking the Crimean Peninsula, which Moscow seized in 2014, with mainland Russia and parts of eastern Ukraine held by pro-Russia separatists.

Russian state gas company Gazprom GAZP.MM said on Saturday it had halted gas exports to Finland, which has refused Moscow’s demands to pay in roubles for Russian gas after Western countries imposed sanctions over the invasion. Read full story

Finland said it was prepared for the cutoff of Russian flows. It applied together with its Nordic neighbour Sweden on Wednesday to join the NATO military alliance, although that is facing resistance from NATO member Turkey.Read full story

Most European supply contracts are denominated in euros or dollars. Last month, Moscow cut off gas to Bulgaria and Poland after they rejected the new terms.

Moscow says Western sanctions, along with arms deliveries for Kyiv, amount to a “proxy war” by the United States and its allies.

Putin calls the invasion a “special military operation” to disarm Ukraine and rid it of radical anti-Russian nationalists. Ukraine and its allies have dismissed that as a baseless pretext for the war, which has killed thousands of people in Ukraine, displaced millions and shattered cities.