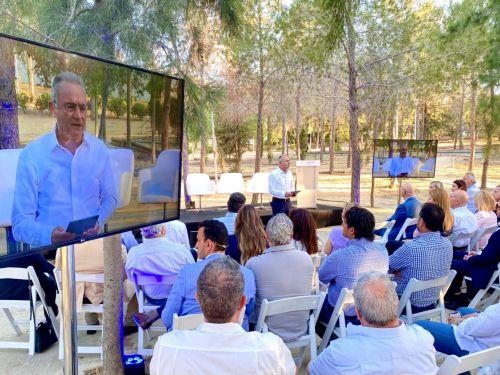 The vision of green transition and the course Cyprus is called to follow towards it, were the topics of an address by the president of Disy, Averof Neophytou, in the context of a discussion organised for the fifth pre-congress of the party.

The meeting took place Monday afternoon at Spyros Kyprianou park in Aglantzia, attended by Disy and government officials, as well as local government representatives. The discussion was prefaced by the executive director of the “Glafkos Clerides” Institute, Michalis Sophocleous, who pointed out that green transition touches every aspect of society and together with digital transition is creating a new way of life.

Neophytou opened the discussion referring to six axes that underpin the green transition in Cyprus and expressed satisfaction for the fact that the pre-conference took place in the greenery of the park.

The president of Disy said that through green transition “the economy can gain an even stronger footing,” adding that Disy will propose a renewed draft agreement for all citizens to move to a more long-term competitive economy and greater societal cohesion.

The concept of sustainability, Neophytou said, is linked to easing the daily life of citizens, as well as tackling climate change, and also to the adoption of transparency.

The key elements of green transition, Neophytou added, are a circular economy, which will reduce pressure on natural resources and is a precondition for the European goal of climate neutrality by 2050; and energy autonomy, which is spurred on by new geopolitical realities and market demands for independence and diversification of energy resources.

Neophytou also spoke about the European Green Agreement towards the aforementioned goals, the sustainability and growth fund, and targeted reforms for the green economy, which he said “are the springboard for the new development process, for the Cyprus of tomorrow “.

The president of Disy stressed that green development encompasses the climate and the environment, but also energy, transport, industry, agriculture and sustainable financing. In this direction, he said, the government plan “Cyprus Tomorrow” is moving, and pointed out that “the budget provides for 10 per cent increased development expenditures compared to last year and indicative expenditures of 717 million euros for green growth.”

Neophytou outlined the ‘six axes’ as being smart cities, smart transport, reciprocal recycling, a new energy market, decentralisation of energy and green transition of the state, economy and business, emphasising that the Ministry of Research, Innovation and Digital Policy, should also include a central Green Transition agency.

Concluding, Neophytou said the same recipe needs to be continued as the one followed by the Anastasiades government, so that the reform process is not derailed. He also said green taxation should be postponed as long as inflationary trends continue, with a proposal to temporarily replace taxation with incentives for energy savings.

The discussion continued with the professor and president of the European Scientific Association of Environmental Economists, Phoebe Kountouris, and the director of the European Commission and advisor to the Greek prime minister for Environment and Circular Economy, George Kremlis, who analysed the way in which the planet’s consecutive crises are linked to climate change, as well as how green growth can provide answers to these challenges.