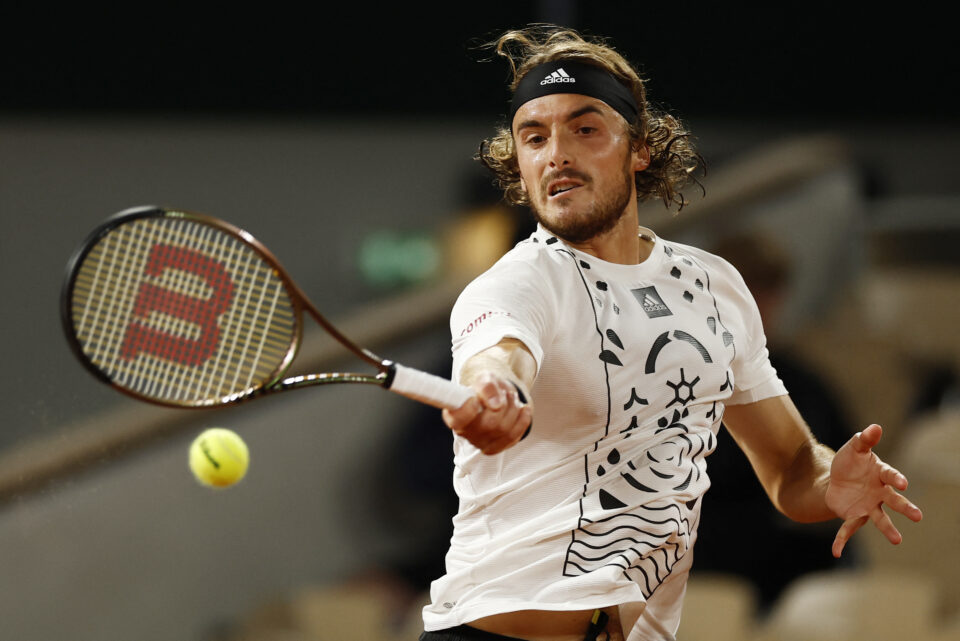 Last year’s runner-up Stefanos Tsitsipas survived a first-round scare at the French Open, beating Italian Lorenzo Musetti 5-7 4-6 6-2 6-3 6-2 to advance into the second round late on Tuesday.

The Greek fourth seed was out of sorts in the first two sets before finding his range to set up a meeting against Czech Zdenek Kolar.

“It was a great first round. I’m going to keep working hard to improve and build a relationship with the crowd here,” Tsitsipas said on Court Philippe Chatrier.

Musetti last year took the first two sets against Novak Djokovic in the last 16 before injury forced the Italian to retire.

On Tuesday, Musetti broke decisively in the 11th game in the opening set when an unforced error from Tsitsipas gave him a 6-5 lead. The Italian followed up on serve and took a one-set lead as his opponent buried a backhand into the net.

Musetti carried the momentum into the second set, racing to a 4-0 advantage as Tsitsipas continued to falter.

But the Greek found his range to stem the bleeding, pulling a break back.

Musetti served for the set at 5-4 and after first missing out with a double fault, he took a two-set lead when Tsitsipas made yet another unforced error.

Tsitsipas cantered into a 3-0 lead in the third set, maintaining the advantage to reduce the arrears.

The Greek moved 2-0 up in the fourth set, saved a break point in the third game to extend his advantage, only for Musetti to break back with a forehand winner.

But Tsitsipas made the most of his opponent’s nerves to break again and go 4-2 up before levelling the contest.

The Italian had run out of gas and Tsitsipas was business-like as he wrapped up the match late in the night to extend his stay in Paris in the bottom half of the draw, where he will not have to meet defending champion Novak Djokovic or 13-time winner Rafael Nadal.

* World number two Daniil Medvedev showed no signs of discomfort from his recent hernia operation, kicking off his French Open campaign with a comfortable 6-2 6-2 6-2 win over Argentine Facundo Bagnis.

* Last year’s runner-up Stefanos Tsitsipas survived a first-round scare at the French Open, beating Italian Lorenzo Musetti 5-7 4-6 6-2 6-3 6-2 to advance into the second round.

* Jo-Wilfried Tsonga gave Norway’s eighth-seeded Casper Ruud a run for his money in a tight French Open first round battle but predictably headed into a tear-jerking retirement with a 6-7(6) 7-6(4) 6-2 7-6(0) defeat.

* Third seed Paula Badosa made quick work of French wildcard Fiona Ferro by winning 6-2 6-0 in under an hour to book a spot in the second round of the French Open and boost her confidence following a dip in form earlier this month.

2043 SABALENKA FIGHTS BACK TO ADVANCE

Seventh seed Aryna Sabalenka beat Chloe Paquet 2-6 6-3 6-4 after a first-set scare to move into the second round.

Sabalenka made 13 unforced errors in the first set, more than four times her opponent, but fought back to seal the victory, hitting a total of 42 winners.

Schunk entered the main draw as a lucky loser due to Ana Konjuh’s withdrawal after the Croatian said on Twitter that she required surgery on her leg having suffered a fracture when she had a fall.

The 21-year-old Gaston reached the second round in Paris for the second time, having lost to Dominic Thiem in the last 16 two years ago.

Spanish third seed Paula Badosa made quick work of wildcard Fiona Ferro by wrapping up a 6-2 6-0 win in under an hour to advance to the next round, where she will take on Kaja Juvan.

Frances Tiafoe held off Frenchman Benjamin Bonzi 7-5 7-5 7-6(5) to pick up his first main draw win at Roland Garros. He will meet David Goffin in the second round.

1528 TEARFUL TSONGA BOWS OUT AFTER DEFEAT BY RUUD

An emotional Jo-Wilfried Tsonga ended his 18-year professional career with a 6-7(6) 7-6(4) 6-2 7-6(0) opening-round loss at his home Grand Slam to Casper Ruud at a packed Court Philippe-Chatrier.

Tsonga, alongside his family and former coaches, took centre stage for a ceremony to commemorate his career, with Roger Federer, Rafa Nadal and Novak Djokovic among those paying tribute to the Frenchman via video messages.

1515 KEYS BATTLES INTO SECOND ROUND

Madison Keys came back from a break down in the deciding set to close out a 6-3 3-6 6-4 win over Anna Kalinskaya. She will play home favourite Caroline Garcia, who beat Taylor Townsend in straight sets, for a place in the third round.

The 24-year-old let his frustrations boil over after losing the tiebreak as he angrily whacked a ball, which struck his chair and narrowly missed the head of a groundsman.

American Sebastian Korda wrapped up a 6-1 7-5 7-6(6) victory over John Millman to book his spot in the second round where he will take on local favourite Richard Gasquet, who rolled back the years against Lloyd Harris to win 6-1 6-3 6-4.

Karolina Pliskova, seeded eighth, recovered from a set and a break down against home hope Tessah Andrianjafitrimo to battle to a 2-6 6-3 6-1 win on Court Simonne-Mathieu, while 16th seed Elena Rybakina of Kazakhstan beat Arantxa Rus 6-1 5-7 6-2.

Danish teenager Holger Rune prevailed in the third set tiebreak to claim his first Grand Slam victory with a 6-3 6-1 7-6(4) demolition of Canadian 14th seed Denis Shapovalov, who made 53 unforced errors in the two-hour match.

The win was Rune’s second against a top-20 ranked player after the 19-year-old upset world number three Alexander Zverev last month in Munich.

World number two Daniil Medvedev breezed into the second round with a routine 6-2 6-2 6-2 win over Facundo Bagnis, who was struggling with a calf injury.

Medvedev had played only one match on clay in the build-up to Roland Garros – a straight-sets loss to Richard Gasquet in Geneva – after returning from a hernia operation.

Jelena Ostapenko, the 2017 champion, ended a five-match losing streak with a 6-1 6-4 win over Lucia Bronzetti to advance to the next round where she will meet Alize Cornet, who saw off Japan’s Misaki Doi in straight sets.

Australian Open finalist Danielle Collins made a strong start to her Roland Garros campaign, cruising past lucky loser Viktoriya Tomova 6-0 6-4 to book her spot in the second round.

Arrest made after car stolen at knifepoint in Paphos (Updated)

Serena had doubts over career before making winning return