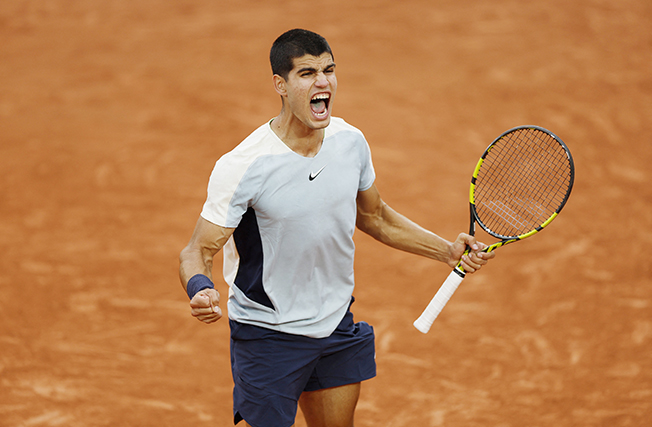 Spanish teenager Carlos Alcaraz, who has taken the tennis world by storm this year, is now unbeaten for 12 straight matches after bagging back-to-back titles in Barcelona and Madrid

Sixth seed Carlos Alcaraz clawed back from the brink of a shock second-round defeat at the French Open on Wednesday to outlast fellow Spaniard Albert Ramos-Vinolas in a five-set marathon that fully tested his title credentials.

Alcaraz is now unbeaten for 12 straight matches after bagging back-to-back titles in Barcelona and Madrid going into Roland Garros.

“I feel tired but I mean it was a great battle against a great player,” he said. “I knew it would be a top match. We fought until the last point. I am so happy with the performance today.
“I had my chances if I saved that match point. The tiebreak I was aggressive. In the fifth set I was fresh. I was like the beginning of the match. That match point changed everything.”

Earlier on Wednesday, Alexander Zverev overcame a woeful start to reach the third round, saving a match point in a 2-6 4-6 6-1 6-2 7-5 victory over up-and-coming Argentine Sebastian Baez.
The German third seed survived a late fightback from the world number 36 and screamed his lungs out when Baez sent a forehand wide on match point.

It was the fifth year in a row that Zverev, who achieved his best result at Roland Garros when he reached the semi-finals last year, had to go through a five-setter in one of the opening two rounds.

“I lost a US Open final being two sets up and I’ve learned from it. He’s unbelievable and he’s got a bright future ahead of him,” Zverev said of his opponent, who won his maiden ATP title in Estoril earlier this month.

World number one Novak Djokovic completed a solid 6-2 6-3 7-6(4) victory over Slovakia’s Alex Molcan in the second round to keep his title defence and quest for a record-equalling 21st Grand Slam on track.

With Djokovic unable to defend his Australian Open title due to his refusal to be vaccinated against COVID-19, Spaniard Rafa Nadal broke a three-way tie for the most Grand Slam titles with the Serb and Roger Federer by winning the Melbourne Park major at the start of the year.

Yet a successful rerun of his 2021 Roland Garros campaign, when he beat 13-time French Open winner Nadal in the semi-finals, will lift Djokovic alongside his great rival.

On a blustery day on Court Suzanne Lenglen, the 35-year-old Djokovic cruised through the opening two sets, breaking Molcan’s serve three times without giving the Slovakian a single opportunity on his own delivery.

The 24-year-old Molcan, trained by Djokovic’s former long-time coach Marian Vajda, was ranked 255th when he went down in straight sets to Djokovic in their only previous meeting in Belgrade last May but since then the left-hander has climbed to a career-high ranking of 38th.

With nothing to lose, Molcan opened up his shoulders in the third set and with some aggressive all-court hitting managed to cancel out Djokovic’s early advantage to force a tiebreak.

But Djokovic then managed to go up a gear and converted his second matchpoint when the left-hander found the net with a return.

“It was a difficult match with a lot of winds, changing direction,” he said on court. “You have to be fully focused.

“I have a lot of respect for Alex. He’s got a game that’s made for this surface. I hope it’s the last time I play against Marian Vajda as coach of my opponent.”

In the women’s draw meanwhile, US Open champion Emma Raducanu was bundled out in the second round, losing 3-6 6-1 6-1 to inspired Belarusian Aliaksandra Sasnovich.

The 12th seeded Briton, who had to dig deep in her opening match to come from a set down to beat Czech qualifier Linda Noskova, faded badly after a strong start as her inexperience on clay was exposed by her opponent.

“I still have got quite a long way to go on this surface,” Raducanu, who played her first pro match on clay as recently as last month, told reporters.

There was also a shock when Greek fourth seed Maria Sakkari was knocked out 7-6(5) 7-6(4) by Czech Karolina Muchova in the second round.