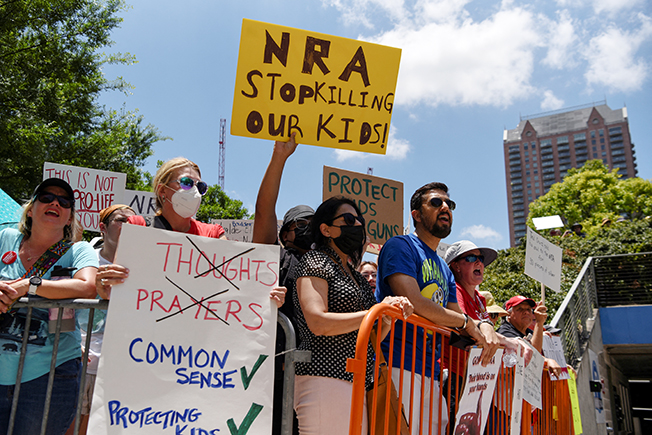 Protesters holding signs and crosses with photos of victims from the Texas elementary school shooting protested Friday outside the National Rifle Association’s annual convention in Houston, as the gun lobby came under pressure after the massacre.

Attendance was dampened and speakers and featured musical acts stayed away as about 500 protesters, some shouting “NRA go away,” and “Shame, it could be your kids today,” jeered attendees outside the George R. Brown Convention Center.

Tuesday’s fatal shooting of 19 pupils and two teachers in Uvalde, Texas, by an 18-year-old gunman equipped with an AR-15 style semiautomatic rifle again focused attention on the NRA, the nation’s biggest gun lobby and a major donor to Congress members, mostly Republicans.

Video of the main auditorium in Houston, which holds about 3,600 people, showed it to be about half-full as former President Donald Trump took the stage late Friday afternoon.

“The existence of evil in our world is not a reason to disarm law abiding citizens,” Trump told the audience to cheers, echoing speakers who rejected background checks or bans on semiautomatic weapons.

South Dakota Governor Kristi Noem, a Republican, urged attendees not to back down in their fight against gun control. “Now would be the worst time to quit. Now is when we double down,” she said.

Republican Texas Governor Greg Abbott and Lieutenant Governor Dan Patrick dropped out of making in-person remarks at the event. Patrick said he withdrew so as not to “bring any additional pain or grief to the families and all the suffering in Uvalde.”

U.S. Senator Ted Cruz, a Texas Republican, said in a speech to the meeting that communities needed weapons to stay safe. “Taking away guns will not make them safer.”

The NRA’s decision to proceed with its largest annual gathering is part of a decades-long strategy of standing up to pressure for gun control that dates to the 1999 Columbine High School shooting in Colorado. Read full story

Wayne LaPierre, NRA executive director, addressed the school killings but said gun owners “love our nation, love our children and grandchildren. … That’s why we will always cherish and protect our fundamental right to defend ourselves and our communities.”

At a park near the convention center, protester Harper Young, a 15-year-old Houston student, held a poster and choked back tears. “It’s completely unacceptable that gun violence is happening again and again. It’s horrific,” he said.

“More guns equal more violence,” she said. “Assault weapons should be banned,” she said outside the meeting.

Houston activist Johnny Mata called on the NRA to halt the convention and hold a memorial service for the Uvalde victims.

“They have the audacity not to cancel in respect of these families, said Mata, who represented advocacy group Greater Houston Coalition for Justice. The NRA should “quit being a part of the assassination of children in American schools.”

Tim Hickey, a Marine Corps veteran attending the event, dismissed the protests. “These people are puppets and sheep to the media. They are not changing anyone’s mind,” he said.

The weekend convention was the five million-member group’s first annual get together after two prior cancellations due to the COVID-19 pandemic. Posters celebrating its 150th anniversary hung over the exhibit hall.

In a pre-recorded video, Abbott said, “as Texans and as Americans we grieve and mourn with these families.” But he said existing gun laws did not stop the Uvalde shooter and pushed back at calls for new legislation, saying “laws will not stop evil madmen from committing these atrocities.”