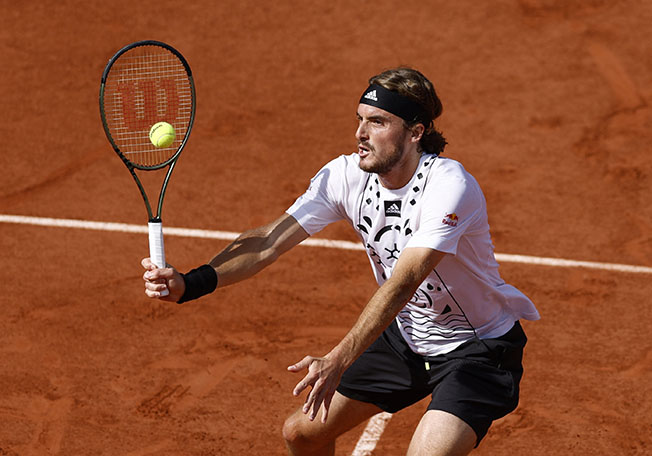 Greek star Stefanos Tsitsipas is safely through in Paris

Greek fourth seed Stefanos Tsitsipas thrashed Sweden’s Mikael Ymer 6-2 6-2 6-1 in a lopsided contest to canter into the French Open fourth round on Saturday.

Tsitsipas, who made the final at the claycourt Grand Slam last year, came into the Roland Garros clash with a 3-0 head-to-head lead over fellow 23-year-old Ymer.

There were no signs that things would be any different this time with Tsitsipas dominating proceedings from the onset on a sun-bathed Court Suzanne Lenglen.

He put on a clinical service display on the red clay, facing just a single break point on his delivery and losing only 10 points on his serve.

“Lot of good rallies from my side. We have a history, playing Mike from the juniors. We played each other a lot,” Tsitsipas said on court, adding that he enjoyed the sunny and drier conditions on Saturday.

“It was a good game for myself. I think I played really well and topped it off with some pretty good, patient tennis.”

Tsitsipas used his forehand to great effect to pin Ymer behind the baseline and broke his opponent’s serve twice in each of the first two sets and another three times in the third.

The Greek had spent a total of seven hours and 40 minutes on court in his previous two rounds, coming through a five-set win over Italian Lorenzo Musetti and a tough four-setter against Czech Zdenek Kolar.

He was pleased to have been able to save some energy with Saturday’s shorter outing.

“I had to do my job; I had to play my tennis. I wasn’t really thinking of the ease that I could maybe create in terms of a result,” he said.

“It’s a good thing to have a match like this every now and then.”

Ymer, ranked 95th in the world, did not help his cause by committing 26 unforced errors during the one hour 32 minute contest.

Tsitsipas will meet Denmark’s Holger Rune or local hope Hugo Gaston for a place in the quarter-finals.

Highlights of the seventh day at the French Open, the second Grand Slam of the year, on Saturday (times GMT):

The 37-year-old Simon, who won his 500th ATP match in the second round on Thursday, will retire at the end of the season.

Paula Badosa and Aryna Sabalenka joined the exodus of top women’s seeds at Roland Garros, leaving world number one Iga Swiatek as the only top-10 seed in the singles draw.

Spanish third seed Badosa retired at 6-3 2-1 against Veronika Kudermetova while Sabalenka, seeded seventh, lost 12 of the last 13 games — including eight in a row — against Italy’s Camila Giorgi to fall to a 4-6 6-1 6-0 defeat.

Jessica Pegula, the 11th seed, powered into the last 16 in Paris for the first time after carving up a 6-1 7-6(2) win over last year’s semi-finalist Tamara Zidansek.

World number two Daniil Medvedev eased into the fourth round with a comfortable 6-2 6-4 6-2 win over Serbian Miomir Kecmanovic in less than two hours. He will play Marin Cilic for a place in the quarter-finals.

Rublev will take on 11th seed Jannik Sinner in the next round after the Italian saved 11 set points in a gruelling 90-minute second set to clinch a 6-3 7-6(6) 6-3 victory over American Mackenzie McDonald.

1140 SWIATEK TOO STRONG FOR KOVINIC

World number one Iga Swiatek navigated a shaky second set to hold off Danka Kovinic 6-3 7-5 and advance to the last 16 in Paris, extending her winning run to 31 matches.

Swiatek, 20, will next face Chinese teenager Zheng Qinwen, who received a walkover after home favourite Alize Cornet retired at 6-0 3-0 with 45 minutes played.