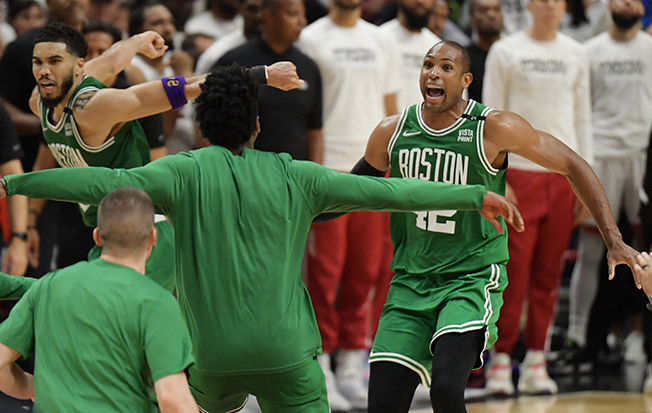 Even when a double-digit victory seemed probable in Sunday’s Game 7 of the Eastern Conference finals, there were still nerve-wracking moments at the finish line.

But Boston held off the charge and series MVP Jayson Tatum registered 26 points, 10 rebounds and six assists as the Celtics notched a 100-96 victory over the host Miami Heat to win Sunday night’s series finale and reach the NBA Finals for the first time since 2010.

Boston led wire-to-wire in ending a streak of five straight losses in opportunities to clinch an NBA Finals berth. One of those setbacks came at home in Game 6 on Friday night.

“We fought through a lot of adversity this year. We’re a resilient group and tonight seemed to signify our season,” Celtics coach Ime Udoka said. “We can’t ever seem to shut the door and have to grind it out. This is a typical Celtics win.”

Marcus Smart added 24 points and nine rebounds and Jaylen Brown also scored 24 points for the Celtics, who won in Miami for the third time in the series.

“To get over the hump with this group means everything,” Tatum said. “I couldn’t be prouder of these guys. The road we took to get here, not a lot of people believed in us. We took the toughest route and it worked out.”

Jimmy Butler recorded 35 points and nine rebounds while playing all 48 minutes for the Heat, although he missed a 3-point attempt with 16.6 seconds left that would have given Miami the lead.

“My thought process was go for the win,” Butler said. “My teammates like the shot that I took, so I’m living with it.”

The Celtics will face the Golden State Warriors in the NBA Finals. Game 1 is Thursday night in San Francisco.

The Heat, who trailed by 17 early in the second quarter and by 14 in the middle of the third, pulled within 82-79 after Adebayo and Butler opened the fourth quarter with baskets.

But Boston countered with eight straight points, with Smart’s floater making it an 11-point cushion with 6:36 left.

Lowry’s layup with one minute left pulled the Heat within 98-93, and Strus followed with a 3-pointer to cut it two with 44.4 seconds left.

Miami had a chance to move ahead, but Butler’s ill-fated transition 3-pointer bounced off the rim, and Smart made two free throws with 11.4 seconds left to give Boston the game-ending four-point lead.

Celtics veteran Al Horford was the defender as Butler came down court. He was unsure if Butler would drive for a hoop or pull up and shoot.

“When he pulled up for the 3, I was like ‘just let me contest in the best way that I can,'” Horford said. “He got a good look at it, and it was nerve-racking. Anything could have happened. He could have made the shot.”

Instead it was a rough season-ending game for the Heat, who made 42 percent of their shots and were a shaky 6 of 30 from behind the arc.

“It’s just one of those really tough moments,” Heat coach Erik Spoelstra said. “You can’t prepare for it, you’re not thinking about it. It’s one of the worst feelings in the world to address a locker room after a game like this. When it ends, it ends in a thud.”

Butler topped 40 points twice in the series but said he didn’t perform at a high enough level.

“Not good enough. I didn’t do my job. Stats don’t mean anything,” Butler said. “The Boston Celtics came out and did what they had to do in the series. I learned that I have to be better and I will be better.”

Proud Perez lives a dream and makes history for Mexico