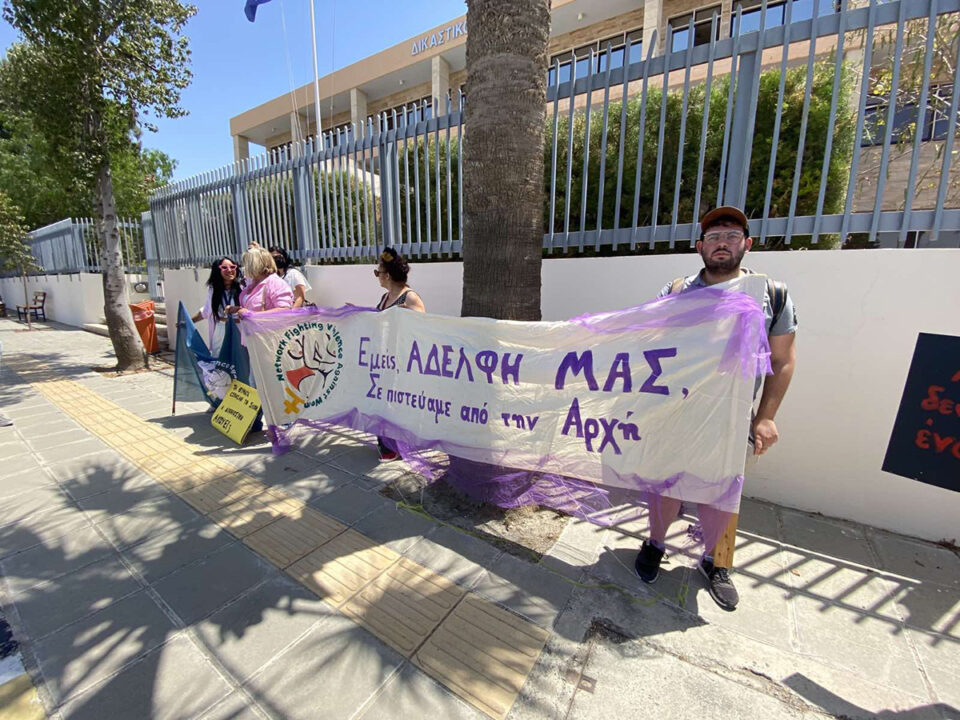 Demonstrators gathered outside Larnaca district court on Monday where former Bishop of Kition Chrysostomos is on trial for assaulting a woman, aged 16 at the time, in 1981. He has entered a plea of not guilty.

The woman, now aged 57, read out her statement in an open court session – at her request – in which she detailed the alleged events of November 1981.

Phileleftheros reported that the woman read out a written testimony that she had initially given in March 2021, tearing up as she detailed the events leading up to and including the alleged assault.

The plaintiff said she first visited the bishop’s offices after her father died, as she was instructed by her mother to visit the bishop and collect the 200 hundred pound which was given to orphans at the time.

During her first visit, she alleged, the bishop sat down next to her on the sofa and began touching her hands.

She later explained to her mother that the incident unsettled her but was told not to speak of him in such a manner as “he is a man of God”.

The woman said she went another four times to the bishop’s offices, where each time he locked the door behind her. It was during the fifth visit that the alleged assault took place, as she claimed that the bishop shoved her, pressed himself on top of her and kissed her on the lips.

She began repeatedly screaming “let me out”, at which point she claims the bishop got off her and opened the door. The plaintiff further stated that she was distraught upon her arrival back home, and a doctor was called in to administer an injection.

The plaintiff said she came forward after seeing on television that another woman had spoken out.

It was reported that the bishop’s lawyer will argue for the case to be quashed, citing the right to a fair trial, as decades have passed since the alleged attack. The lawyer further argued that the case has already been thoroughly investigated by the police.

The lawyer also stated that important witnesses in the case have since passed away.

Women’s group Pogo was present outside the court with banners, while the organisation’s leader Skevi Koukouma told reporters that they were there to support the plaintiff and encourage others who were not able to speak out.

Last October, the bishop was acquitted of charges of rape by Larnaca Criminal Court, which found the plaintiff’s testimony was unreliable.

“I feel vindicated. Justice has prevailed,” Chrysostomos had told the Cyprus News Agency at the time.

The court added that the prosecution’s case was based on the plaintiff’s testimony which was rejected by the court as it was found to have “many contradictions, lies and erratic allegations in essential, main and key points.”

The offence allegedly took place in April 2011 in his office in Larnaca. The woman alleged that the bishop had offered her an alcoholic beverage before raping her.

We need to talk about Love, Death & Robots