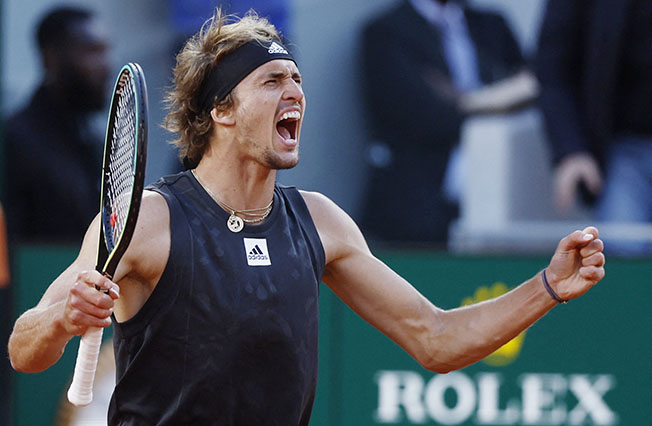 German third seed Alexander Zverev capitalised on an error-filled performance from Carlos Alcaraz to tame the high-flying teenaged Spaniard 6-4 6-4 4-6 7-6(7) on Tuesday and reach a second straight semi-final at the French Open.

This was the first time the 25-year-old Zverev defeated a top-10 opponent at a Grand Slam in 12 attempts and his victory came against a player who came into the contest having won 14 consecutive matches.

Zverev, who lost to Stefanos Tsitsipas in the 2021 semi-final, had a 2-1 head-to-head lead against Alcaraz but his opponent had won their most recent meeting — the only one on clay — this month in the final of the ATP Masters in Madrid.

Alcaraz made 56 unforced errors as Zverev saved a set point in the fourth set tiebreak before converting his second match point with a superb backhand service return to set up a meeting against either world number one Novak Djokovic or 13-time French Open champion Rafa Nadal.

In the women’s draw on Tuesday, Teenager Coco Gauff will not be swept up by the emotion of reaching her first ever Grand Slam semi-final at the French Open on Tuesday, with the weight of expectation having been a burden rather than a motivation in the past.

The talented 18-year-old beat fellow American Sloane Stephens in straight sets to reach the last four where she will face left-hander Martina Trevisan of Italy.

“I think it’s just another match, to be honest. I feel like last year I was looking at the finish line, and now I’m not looking at anything really except that ball in front of me,” Gauff, a quarter-finalist in Paris last year, said.

“So I think going into the next match I’m just going to approach it the same. I care about the results, yes, but also at the same time I don’t. Like if I gave it my all I am not going to be upset,” she told a news conference.

A few hours after clinching her singles semi-final spot, she also booked a place in the quarters of the women’s doubles with Jessica Pegula.

The busy schedule, however, will not affect her performance, having played as many as three matches a day during her junior career.

One thing she will not be carrying into the match from that time is the weight of expectation.

“I think ever since I joined the tour, or even when I was eight years old, (I was) the next Serena (Williams), next this, next that, and I think I really fell into the trap of believing that,” she said.

Our View: About time HIO took moves to regulate GPs