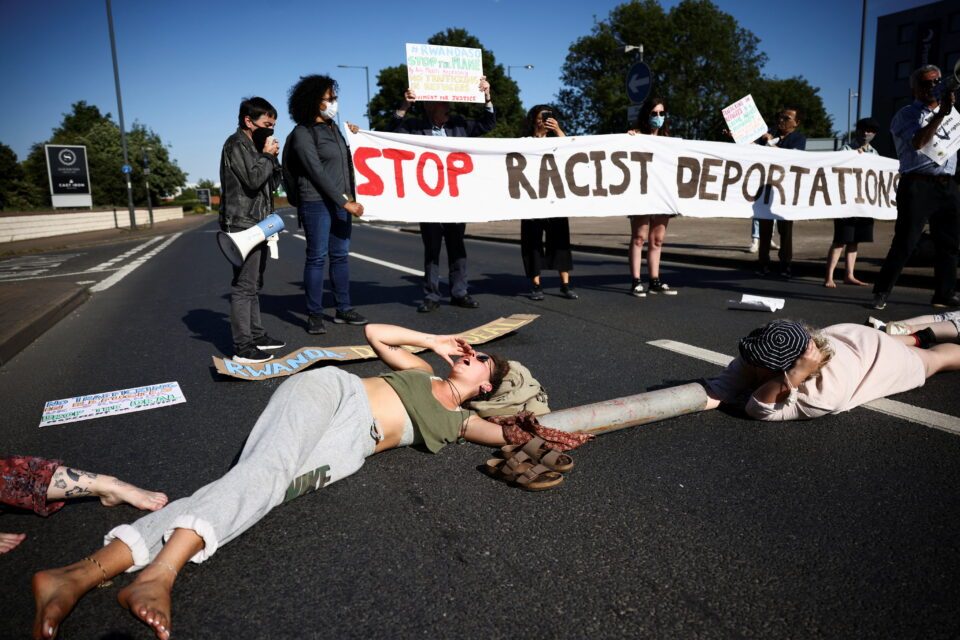 Activists block a road leading away from the Colnbrook Immigration Removal Centre as they protest against the British Governments plans to deport asylum seekers to Rwanda, near Heathrow airport

Britain pressed on with its strategy of deporting asylum seekers to Rwanda on Wednesday and is planning further flights despite a last-minute intervention by European judges that grounded the first plane minutes before it was due to depart.

The government was thwarted in its attempt to send a handful of migrants on a charter plane more than 4,000 miles (6,4000 km) to Rwanda on Tuesday night after the European Court of Human Rights (ECHR) stepped in to issue injunctions, meaning the flight was cancelled.

“We will not be put off by the inevitable legal last minute challenges nor we will allow mobs…to block removals,” Home Secretary (interior minister) Priti Patel told parliament, saying the government was committed to the policy.

“We believe that we are fully compliant with our domestic and international obligations, and preparations for our future flights and the next flights have already begun,” she added.

London struck a deal with Rwanda in April to sends tens of thousands of asylum seekers who arrived illegally in Britain to the East African country to have their claims processed. The British government says the plan will stem the flow of migrants who make dangerous trips across the English Channel from France.

The United Nations’ refugee chief has called the policy “catastrophic”, the entire leadership of the Church of England denounced it as immoral and shameful, and media reports have said Prince Charles, the heir to the throne, had privately described the plan as “appalling”.

The government argues the policy will smash the business model of people-smuggling networks, but political opponents say it is a divisive stunt and an expensive shambles.

The European court’s late intervention has also led some in Prime Minister Boris Johnson’s Conservative Party to call for Britain to pull out of the European Convention on Human Rights altogether.

One minister said she was not aware of any such plan, but Johnson’s spokesman said nothing was being ruled out.

ALL OPTIONS ON TABLE

“We will do whatever it takes to deliver this new approach, including being prepared to explore any and all further legal reforms that may be necessary,” the spokesman said. “We are keeping all options on the table.”

Law experts said Britain would be joining Belarus and Russia in not being part of the convention if it were to opt out.

While a number of migrants had their removal blocked by British courts on an individual basis in the days leading up to the flight, Patel said the ECHR had intervened to block three deportations, preventing anyone from being on the plane.

In its ruling regarding one of the men, the European court said he should not be removed until after a full court trial is held in London to decide on the legality of the scheme. This is due to take place next month.

Patel said the government believes this did not preclude other flights from being able to leave in the meantime.

Britain hopes the $150 million deal with Rwanda will put a stop to dangerous journeys by migrants in small boats across the English Channel, with more than 28,500 people arriving from Europe last year. On Tuesday alone, another 444 were detected.

Patel said it cost 5 million pounds a day to accommodate the migrants.

Polls indicate the British public are evenly split on the issue, with many wanting action on illegal immigration – something which played a major role in the 2016 vote for Brexit – while others say the policy harms Britain’s international reputation.

Rwanda, whose own human rights record is under scrutiny, said it also remained fully committed to the plan.

Russia says West, unlike China, ‘shoot themselves in the head’ over Ukraine