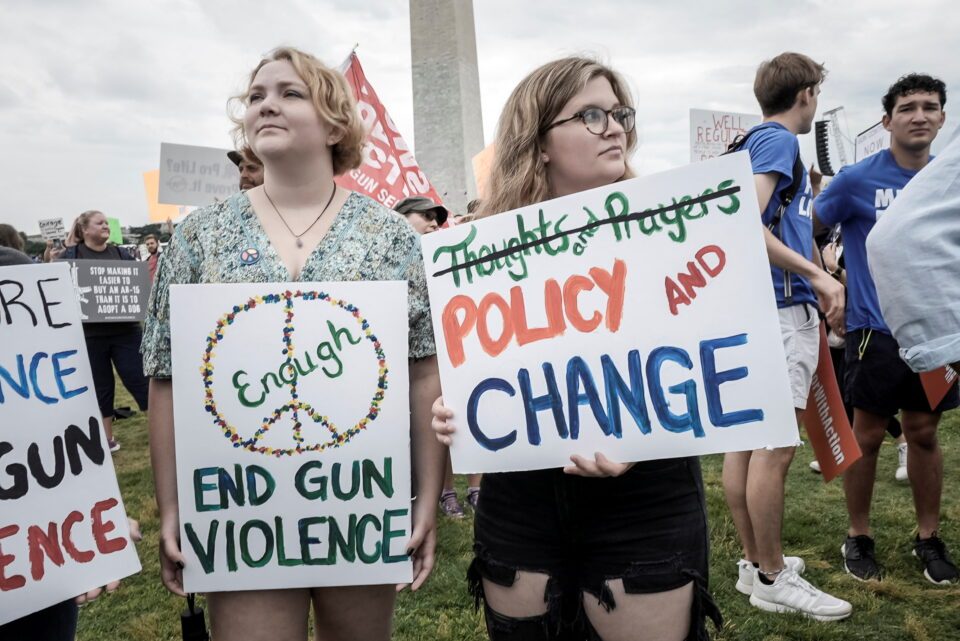 Demonstrators (in Washington) hold signs at "March for Our Lives", one of a series of nationwide protests against gun violence this month REUTERS/Ken Cedeno

The lead Republican negotiator in U.S. Senate efforts to craft a bipartisan gun safety bill walked out of the talks while the lead Democrat remained optimistic that lawmakers could vote on legislation before leaving for a two-week July 4 recess.

“I don’t know what they have in mind, but I’m through talking,” Cornyn said.

However, Tillis and Murphy later said the talks were close to reaching agreement and added that legislative text for a bill could emerge in coming days.

The bipartisan group has been working on a deal to curb gun violence since a gunman killed 19 school children and two adults in Uvalde, Texas, less than two weeks after a racist shooting in Buffalo, New York left 10 dead. Talks have bogged down in recent days.

“To land a deal like this is difficult. It comes with a lot of emotions. It comes with political risk to both sides. But we’re close enough that we should be able to get there,” said Murphy, the lead Democratic negotiator.

Murphy later issued a statement saying: “I believe we can bring this to a vote next week.”

Time to pass major legislation is running short as the Nov. 8 midterm elections, when Republicans are looking to win back control of Congress, draw nearer.

Murphy and Tillis each told reporters that staff have begun drafting legislative text for the majority of provisions that lawmakers have agreed on. Tillis suggested that text could be available as early as Friday.

Tillis, saying he expected a deal, declined to speak in detail about the negotiations: “We’re too close and down to the final stages.”

The group announced a framework on measures to curb gun violence on Sunday. It did not go as far as Democrats including President Joe Biden had sought, but would still be the most significant action to combat gun violence to emerge from Congress in years if passed.

Disagreements remained over two main provisions: how to provide incentives to states to create ‘red flag’ laws, in which guns can be temporarily taken away from people who are deemed dangerous; and the ‘boyfriend loophole,’ which allows authorities to block abusive spouses from buying firearms but does not cover “intimate partners” who are not married.

Cornyn, whose home state of Texas does not have a red flag law and is seen as unlikely to enact one, wants the funding for that provision to cover other efforts for people with mental illness, such as “crisis intervention programs.”

Tillis said the negotiators were working out a mechanism that would allow federal funding for states that want to adopt red flag laws and states that favor other intervention programs, with parity the ultimate goal.

He also said the lawmakers were looking to existing state laws as models for the boyfriend loophole provision.