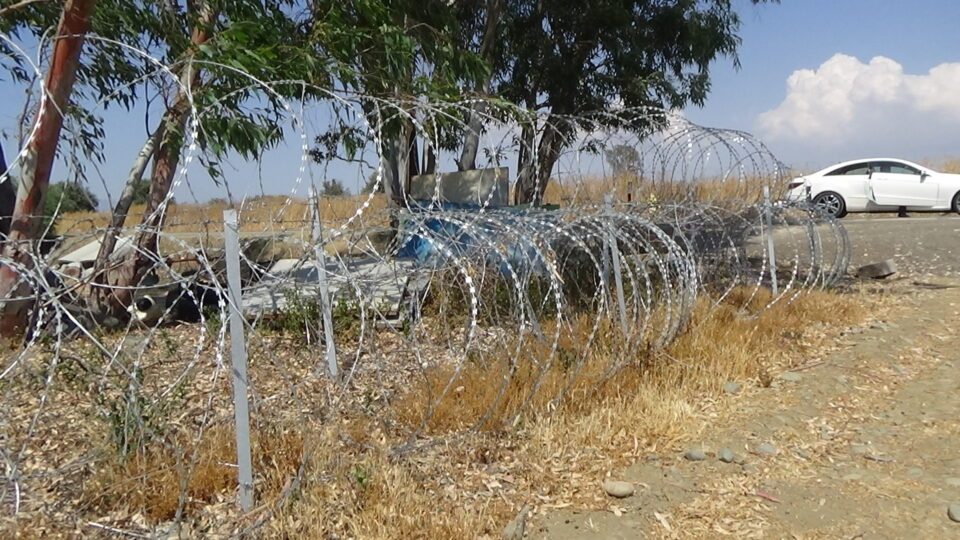 Local residents have been up in arms about the whole plan

Fencing along the Green Line unlikely to stop migrants coming in, but sure to cause all sorts of new issues

The seemingly endless stream of refugees and asylum seekers – mostly coming in through the buffer zone – is a desperate situation prompting a general cry that ‘something must be done’. Some solutions, though, not only fail to solve the problem, but may also create many smaller problems.

That seems to be the case with the government’s current plan to build a barbed-wire fence on the Green Line, on the edge of the buffer zone.

One can see why a barrier to keep out migrants, whose sheer numbers have already overwhelmed the reception centre at Pournara, might seem like a good idea. Around 20km of wire has already been installed in the area between Astromeritis and the old Nicosia airport, which has been the main crossing point in the past couple of years.

The next stage of the plan involves blocking the entrance roads, and building gates which those living or working in the buffer zone can use to access their houses and fields. The idea is for each person to be given a special code to open the gates, which they can also use remotely to let in visitors.

Local residents have been up in arms about the whole plan, and especially about the thought of having locked gates behind them.

“If they could persuade me that they’re right, then I’d accept it. But they haven’t,” George Makris, who lives in the buffer zone at Peristerona, told the Cyprus Mail.

The government plan has three major flaws. The first is that a barrier is useless unless it covers the entire Green Line – otherwise it can just be bypassed. But the Green Line runs for 180km, and includes many points where installing barbed wire would be impractical, or impossible.

The town of Athienou, for instance, is entirely within the buffer zone; the same goes for the village of Troulloi in the Larnaca district. Parts of Nicosia (even the Nicosia Mall) are also behind the official Green Line. Even in the area where fencing has already been installed, two villages – Denia and Mammari – are inside the buffer zone. Rather than keep entire villages permanently behind locked gates, the government has decided to exempt them.

That last point is the second major flaw. The wire isn’t very high, about the height of a person. (The gates will be higher, almost three metres.) It’s quite easy, especially at night, with no-one watching, for someone to crawl underneath, or pass over.

Indeed, a recent video (uploaded to the Sigmalive channel on YouTube on May 4) shows a local using a piece of corrugated iron to walk across in a matter of seconds.

The plan does admittedly call for cameras and officers on patrol, but they won’t be everywhere – and migrants are always accompanied by traffickers, who’ll know how to dodge the system.

The third major flaw is perhaps the most important. Let’s assume that a group of migrants is somehow unable to cross the barrier, or gets caught while trying to breach it. What are the authorities to do when faced with Syrians or Africans already in the buffer zone, loudly declaring that they’re seeking asylum?

In a recent interview in Phileleftheros (May 28), Interior Minister Nicos Nouris opined that, even though this was a matter for the police, he presumed they’d operate as they do at protests, repelling the intruders with “spray, water and so on”.

The point is clear. Asylum seekers have established rights, and can’t simply be repelled or prevented from applying – with or without a barbed-wire fence.

Meanwhile, the plan poses all kinds of practical problems – especially in the area around Peristerona, where the buffer zone is at its widest. There are over four kilometres between the Green Line and the actual Turkish positions, an area that includes many homes and orchards, a tennis club, a cemetery, and the largest prickly-pear plantation in Cyprus. That’s a lot of people who are going to be affected by the new system.

Makris points out some of the issues. Power cuts are frequent, and the gates won’t open without electricity. (Nouris’ proposed solution is to have a solar-powered mechanism as a backup.) Phone signal is also erratic, so it might be impossible to open the gate for a visitor or to even know they’re there – a big issue if, for instance, the homeowner happens to be ill and the visitor is a doctor.

There are other unintended consequences. Many dogs have already been injured by becoming entangled in the barbed wire. There are more roads than gates, so farmers may require a big detour to access their fields every day. It’s also unclear if it’s legal for the locals’ freedom of movement to be curbed, or their personal data to be traceable whenever they enter and exit.

Above all, there’s a psychological factor: “It reminds me of being in prison,” says Makris, at the thought of being essentially cut off – except with government permission – in his own home.

Nor is the fear just psychological. “We don’t have security,” adds Panayiota Shakalli, who lives further down the buffer zone with her husband. They’ve often seen migrants, camped beneath the olive trees and waiting for a trafficker to guide them across – but it’s not just the migrants, Turkish troops are also down the road. Though the area is relatively calm, tensions between the two sides continue to simmer – and placing a barrier at the top of the buffer zone could upset the status quo, encourage Turkish incursions and exacerbate tension, making those caught in between more vulnerable. (Unficyp had no comment when asked about this scenario.)

In short, the barbed-wire plan is fraught with problems; some might even say it’s doomed to fail. Yet the situation is so desperate that anything is better than nothing – especially with elections coming up. Besides, what other solutions are there?

“Everyone agrees we need to find a way to stop the flow of migrants,” admits Makris. “In my opinion, though, the real point is to catch the traffickers – I’m sure they know who they are – and try to stop the migrants from coming in the first place. Not pick them up, take them to Pournara and take five years [to process them]!”

The temptation to make cynical assumptions should perhaps be resisted. Still, on a small island, after years of a worsening problem, the police must surely have at least some clue to the identity of whoever’s bringing these migrants across. If the government really want to solve the issue, they might do better to strike further back in the supply line.

Building a barrier at the final stage – even if it were an effective barrier, which it isn’t – is unlikely to work.