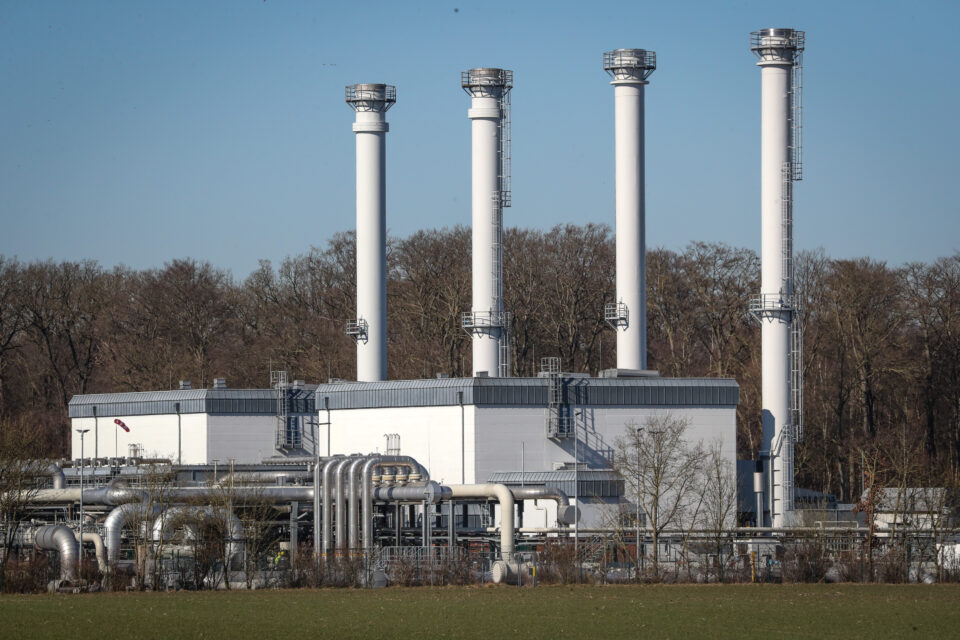 Germany triggered the “alarm stage” of its emergency gas plan on Thursday in response to falling Russian supplies but stopped short of allowing utilities to pass on soaring energy costs to customers in Europe’s largest economy.

The measure is the latest escalation in a standoff between Europe and Moscow since the Russian invasion of Ukraine that has exposed the bloc’s dependence on Russian gas supplies and sparked a frantic search for alternative energy sources.

The decision, announced by the economy minister, marks a stark shift especially for Germany, which has cultivated strong energy ties with Moscow stretching back to the Cold War.

“We must not fool ourselves: The cut in gas supplies is an economic attack on us by (Russian President Vladimir) Putin,” Economy Minister Robert Habeck said in a statement, adding Germans would have to reduce consumption.

“It is obviously Putin’s strategy to create insecurity, drive up prices and divide us as a society,” he added. “This is what we are fighting against.”

Gas rationing would hopefully be avoided but cannot be ruled out, Habeck said.

Russia has denied the gas supply reductions were premeditated, with state supplier Gazprom GAZP.MM blaming a delay in return of serviced equipment caused by Western sanctions.

Under its Phase 2 plan, Berlin will provide a credit line of 15 billion euros ($15.76 billion) to fill gas storage facilities. In addition, a gas auction model will be launched this summer to encourage industrial gas consumers to save gas.

The government activates the second “alarm stage” of a three-stage emergency plan when it sees a high risk of long-term supply shortages. It theoretically allows utilities to pass on high prices to industry and households and thereby help to lower demand.

A move to the next phase has been the subject of speculation since Gazprom cut flows via the Nord Stream 1 pipeline across the Baltic Sea to just 40% of capacity last week.

Facing dwindling gas flows from main supplier Russia, Germany has since late March been at Phase 1 of its emergency plan, which includes stricter monitoring of daily flows and a focus on filling gas storage facilities.

In the second stage, the market is still able to function without the need for state intervention that would kick in the final emergency stage.

“We have seen some serious cuts already,” a gas trader in Europe said. “The system is still coping, but there’s not much left,” he said.

The benchmark Dutch wholesale gas contract for July delivery TRNLTTFMc1 rose as much as 4%, to 131.50 euros per Megawatt/hour (MWh) before settling at 128 euros/MWh by 0835 GMT, still up for the day.

Nord Stream 1 is due to undergo maintenance on July 11-21 when flows will stop.

Russia may cut off gas to Europe entirely to bolster its political leverage, the head of the International Energy Agency (IEA) said on Wednesday, adding Europe needed to prepare now.

Russian gas flows to Europe via Nord Stream 1 and through Ukraine were stable on Thursday, while reverse flows on the Yamal pipeline edged up, operator data showed.

Several European countries have outlined measures to withstand a supply squeeze and avert winter energy shortages and an inflation spike that could test the continent’s resolve to maintain sanctions on Russia.

The supply cuts have also driven German companies to contemplate painful production cuts and resorting to polluting forms of energy previously considered unthinkable as they adjust to the prospect of running out of Russian gas.

The European Union on Wednesday signalled it would temporarily turn to coal to plug energy shortfalls, while describing Moscow’s gas supply cuts as “rogue moves.”

The bloc’s climate policy chief Frans Timmermans said on Thursday that 10 of the EU’s 27 member countries have issued an “early warning” on gas supply – the first and least severe of three crisis levels identified in EU energy security regulations.

“The risk of full gas disruption is now more real than ever before,” he said.

– This stage is triggered when there are “concrete, serious and reliable indications that an event may occur which is likely to lead to a significant deterioration of the gas supply situation and probably to the alarm or emergency level.”

– Gas companies continue to ensure supplies, there are no supply disruptions yet.

– Electricity TSOs coordinate to ensure the stability of their grids.

– Gas suppliers advise the government and are part of the crisis team.

– The government immediately informs the European Commission about potential further measures, which can include revoking the early emergency status if the conditions are no longer met.

– This stage is triggered when there “is a disruption in the gas supply or an exceptionally high demand for gas which leads to a significant deterioration of the gas supply situation, but the market is still able to cope with this disruption or demand without the need to take non-market based measures.”

– It kicks in when there is a high risk of long-term supply shortages of gas, and theoretically enables utilities to pass on soaring gas costs to industry and households

– Germany’s Economy Ministry on Thursday said, however, that this clause had not been triggered

– There are no changes compared with the first phase, but all market players, including TSOs and gas suppliers, are under more pressure to balance out disruptions via efficiency and short-term measures such as procuring gas from alternative sources.

– This stage is triggered when there “is an exceptionally high demand for gas, a significant disruption in gas supplies or another significant supply situation and all relevant market-based measures have been implemented, but gas supply is insufficient to meet the remaining gas demand so that additional non-market based measures need to be taken, in particular to ensure the supply of gas to protected customers.”

– This is done by the German network regulator, the Bundesnetzagentur, which is tasked with securing the “vital demand for gas with special consideration of protected customers and minimising consequential damage.”

– In broad brush terms, supply to industry is curtailed first, while households and critical institutions such as hospitals continue to receive available gas.

Boost for luxury London property prices as Russians locked in