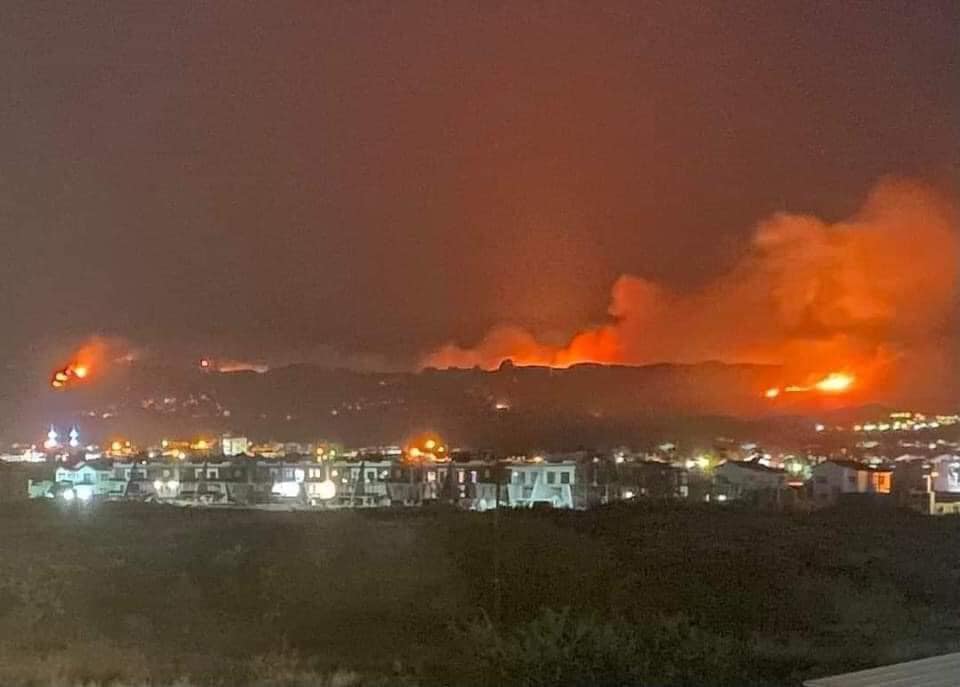 Firefighting operations resumed early on Friday morning in the north’s Kantara area as flare-ups during the previous night reignited on two fronts.

Helicopters were the first to the scene on Friday, with firefighting planes set to join the effort shortly.

According to Turkish Cypriot leader Ersin Tatar, citing information gathered by drones, by noon Thursday the blaze, which sparked on Tuesday, had burned through 12,000 acres of land.

But by Thursday evening flare-ups were reported near the villages of Kantara and Akanthou. Tatar had to cut short a public function in Morphou and head out to the risk areas.

Oktay arrived in the north on Thursday to visit the affected areas.

A large international effort is underway to contain the blaze. Israel sent two firefighting planes and a transport aircraft to help the firefighters’ efforts in Kantara on the eastern part of the Kyrenia mountain range.

According to diplomatic sources who spoke to the Cyprus News Agency, the decision to dispatch the aircrafts was taken by Israeli Prime Minister Naftali Bennett and Foreign Minister Yair Lapid after the Cypriot government officially asked for help in their firefighting operation.

The Israeli firefighting planes landed at Larnaca airport on Thursday and headed to the northern part of the island along with a Unficyp helicopter.

They are currently boosting the efforts of two firefighting planes from the Republic, two British Bases helicopters and one dispatched from Turkey that have been waging battle with the blaze since early on Thursday.

Republic of Cyprus firefighting aircraft were first sent to north on Wednesday after the Turkish Cypriot authorities submitted a request for help to the Cypriot government and to Unficyp.

The villages of Flamoudi and Ardana in the north were evacuated by Turkish Cypriot authorities in the early hours of Thursday.

The residents of the two villages were temporarily housed in hotels located in the village of Davlos, and do not yet know when they will be able to return to their homes, according to the Cyprus News Agency.

The village of Trikomo is also on high alert, with its residents reportedly ready to evacuate their homes as well should the winds change direction and bring the blaze dangerously close to the them.

So far, the villages affected by the fire in the north are Flamoudi, where it first started, Ardana, Ayios Andronikos, Ayios Iakovos, Mandres, Akanthou and Lefkoniko.

“This is a catastrophe, it will take a long time before we can assess the damage cause by the fire and start planning the next steps,” Turkish Cypriot ‘prime minister’ Unal Ustel told media in the north on Thursday.

The head of the forestry department Charalambous Alexandrou told state broadcaster CyBC on Thursday that Cyprus is also ready to dispatch another 40 firefighters to the north.

“The situation is slightly better compared to Wednesday,” he said.

Strong ground firefighting forces remained in the area from the relevant department in the north.

It was reported that the decision to provide help was signed off by President Nicos Anastasiades.

The fire broke out at 2pm on Tuesday and strong winds made it very difficult to bring under control. Four people were injured, one of whom was a fireman.

The Tochni monastery near Mandres was also at risk from the flames which later shifted direction. Reports late at night suggested the fire was moving eastwards towards the village of Akanthou.

Firefighters were dispatched to extinguish the fire half an hour after it broke out, said ‘agriculture minister’ Dursun Oguz.

Public health needs to shape up, report by auditor-general finds