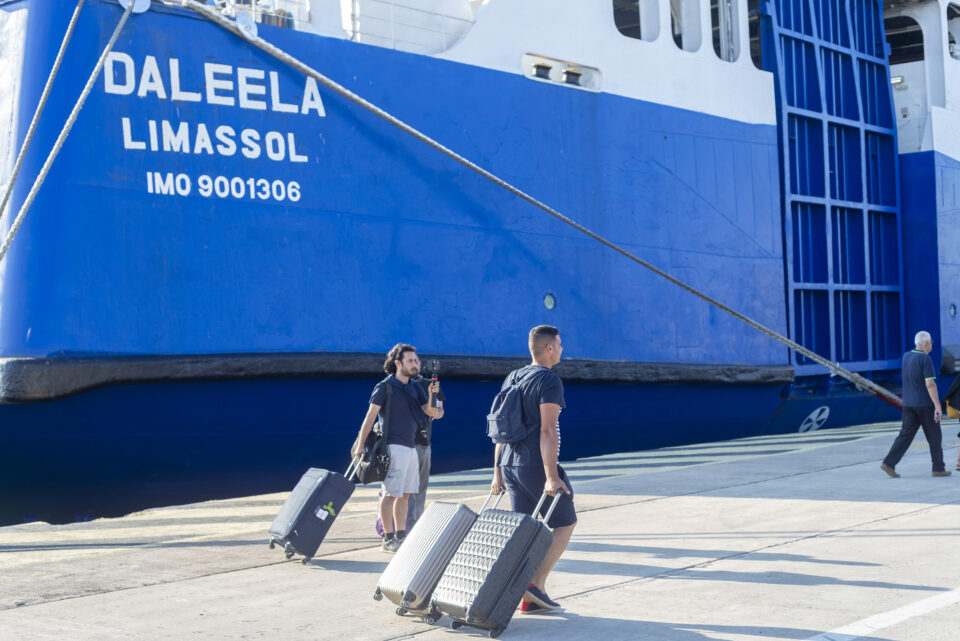 Stavros Koniotis experiences what the first ferry from Cyprus to Greece in over 20 years has to offer. And then takes it back again

One week ago the passenger ferry Daleela sailed out of Limassol on what was a historic voyage; the first passenger ship connection between Cyprus and Greece for over 20 years, with excited passengers, pets, vehicles on board.

But for this writer it was no small undertaking to go there and back again, but a total of 60 hours on board for the Limassol – Piraeus round trip afforded the opportunity to record the first reactions of the passengers and soak up the overall experience on board, whose name in Arabic refers to the frontman, the driver, the one in front.

The M/V Daleela safely transported around 150 travellers on its maiden voyage with an adequate level of comfort – not luxury though as the deputy ministry of shipping and the management of the operating company are quick to emphasise this is not a cruise ship but a passenger ferry. And the voyage is targetted at specific types of passenger: aerophobics, people who want to travel with their pets or their vehicle or even brings large amounts of stuff with them (such as students).

The maiden voyage’s 155 passengers did add to the prestige though counting among them the Deputy Ministers of Shipping and Tourism, Vassilis Dimitriades and Savvas Perdios, Limassol Mayor Nicos Nicolaides, MPs Nicos Sykas and Marinos Mousiouttas, representatives of the Chamber of Shipping, the Cyprus Shipowners’ Union and the team that worked on the whole project.

But, of course, there was still space on board for your average joes. These included four motorcyclists from HOG Cyprus complete with Harleys, which they are now able to put to use in Greece too where they were headed for a week.

After 21 years their dream has finally become a reality, biker George Kadros said, adding that the opening of the ferry link opens up “great prospects for motorcycle enthusiasts”. Already, he said, thoughts are being made about using the new service to organise events in Cyprus for bikers from all HOG branches in Europe.

Also taking advantage of bringing her wheels with her was Kyriaki Ioannidou, who boarded the first route of the Daleela and will return on the last boat of the season, in mid-September, after spending the summer on a road trip around Greece in a van she has kitted out in the style of a camper van.

“The trip was a gift from my priest husband,” Ioannidou said, adding that she plans to take in Evia, Aitoloakarnania, mainland Greece including Thessaloniki, Halkidiki and a tour of Epirus before heading south to the Peloponnese and finally Piraeus to board the return ship.

It was adventure of a different kind for air seat passenger Theodosis who chose to take the ferry to relive the experience of his student years, about four decades ago.

In addition to the 110 air seats, the Daleela has a small number of VIP cabins and 38 first class cabins that can accommodate 110 passengers. Another 180 passengers can be accommodated in the 68 second class cabins, with communal bathrooms, while for hosting pets there are six kennels on board, some of which were put to good use as passengers were seen joining the sailing with their dogs.

But the time spent on board is considerable. On the first night entertainment was laid on with the sounds of DJ Blue Captain, who was none other than the Deputy Minister of Shipping.

Shortly before arriving in Piraeus on Monday afternoon, he expressed his satisfaction for completing the historic trip.

“A big step has been taken, at last the issue of alternative connectivity is becoming a reality and we hope it will be embraced by the world to make it sustainable, while the first impressions are very positive,” he said.

He noted that some points have been identified regarding the improvement of the services offered and assured that, in cooperation with the contractor, “we will work to improve the service even more, to better serve the travelling public.

“It’s only a matter of time, every trip will be better,” he added.

Meanwhile Perdios said that “the standard on board are very good taking into account that this is a ferry and the money you pay to utilise the service. We’ve seen some details about improvements, but let’s not forget that every start is difficult,” he added.

At the same time, he underlined that his deputy ministry will evaluate the ways in which it can promote the ferry connection between Cyprus and Greece abroad and on which categories of travellers it should focus.

“I was amazed that the ship has so much space for cars, motorcycles and equipment and this means that we will be able to sell the idea of transporting equipment, such as diving, sailing and other sports with bulky equipment,” he added.

The last ferry voyage between Greece and Cyprus took place on October 8, 2001 with the ship Salamis.

Any kind of connectivity between Cyprus and other countries is in the interest of its people and we are pleased about this development, member of the Board of Directors of the Cyprus Chamber of Shipping Sunil Kapoor said.

“I am sure that the public will benefit from this service, not only from Cyprus, but also from other parts of Europe, as long as it is promoted properly,” he said, expressing his joy for the enthusiasm shown by the passengers.

The pomp and ceremony over it was time to head back to from where we had come. Due to the ceremony itself and some procedural issues, the ship’s departure took place with a delay of five and a half hours, leaving at 6:30am on Tuesday, an early start for travellers from Greece and other countries boarding it although they did not seem too bothered at having lost a night’s sleep.

Visibly moved, the CEO of contracting company Scandro Holding Ltd Marios Michael noted the efforts made so that everything was ready in an extremely tight time frame.

He gave credit to all those who worked on the preparation of the ship, indicating that “while we asked for two days for the last equipment to be installed, the ship got permission to enter the port at midnight on Friday so we had only 24 hours of preparation”.

“The public should expect a sea bus,” he said, although that is a bus with a bar, a cafeteria, a casino and a playground on board. In addition, he said, to keep passengers entertained there are games available including backgammon, football and pinball.

By noon on Wednesday the Daleela docked again in Limassol bringing the historic voyage to a close. And while it was an experience that was over for us and the other passengers on board, for the staff it was time to get to and prepare the boat for the next impending departure.