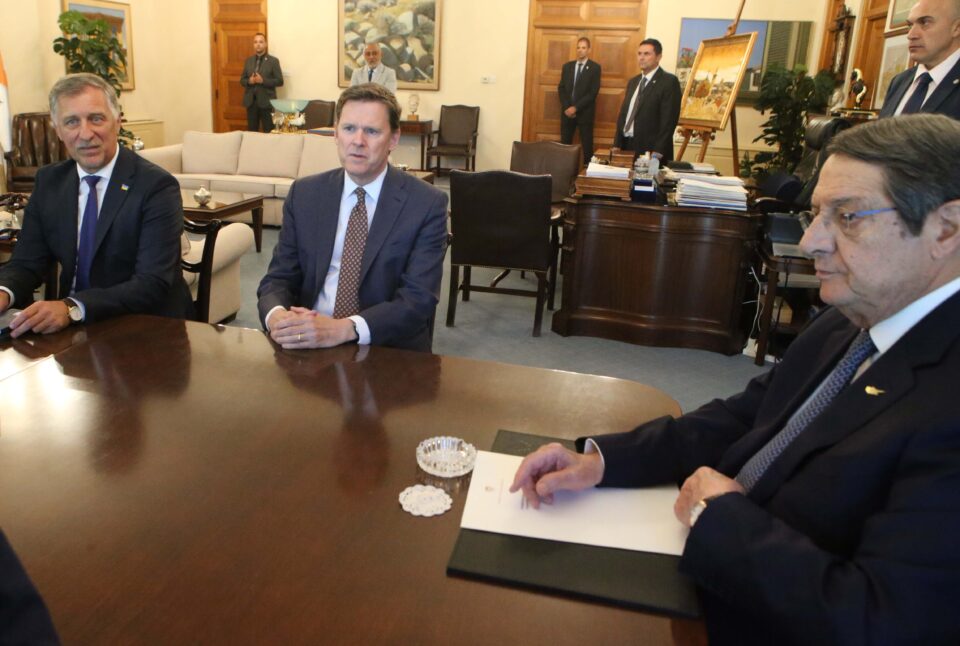 Trust between the two sides in Cyprus is at a low point and without rebuilding it, it will be difficult to move forward with the political process, a UN official said on Monday.

Colin Stewart, the UN chief’s special representative in Cyprus, made the comment while responding to questions coming out of the presidential palace after a meeting President Nicos Anastasiades. He was due to meet Turkish Cypriot leader Ersin Tatar later in the day.

Stewart said he and Anastasiades discussed the need to build trust between the people as a foundation for finding some way to move forward with the political process.

“And we can see… and we discussed how trust is at a low point and things seem to be going in the wrong direction and therefore the need for doing whatever we can to rebuild that trust without which it will be very difficult to move forward on the political process,” he said.

The UN official said he had a very good meeting with Anastasiades, during which he thanked the president for the support the Greek Cypriots provided to the north during the devastating fires of last week.

This assistance highlighted a key point for Cyprus – solidarity among Cypriots, he said.

“The UN of course stands in solidarity with the Turkish Cypriots over this disaster. It illustrates a fundamental point about this island and that is the solidarity amongst Cypriots. When the time came there was unhesitating and unquestioned assistance from Greek Cypriots for Turkish Cypriots, who were in this difficult situation and I think this is a very positive thing,” Stewart said.

Stewart said that he and Anastasiades discussed confidence-building measures among people on both sides, as a foundation for finding a way to restart the political process leading to a Cyprus settlement.

In a written statement later, government spokesman Marios Pelekanos said Anastasiades conveyed to the UN official his disappointment “over the [Turkish side’s] rejection of his proposals for adopting bold confidence-building measures that might create the right climate for the recommencement of negotiations.”

At the meeting Anastasiades also noted his strong concern over the new fait accomplis which Turkey is attempting in Cyprus, but also over the “unacceptable rhetoric deployed by the Turkish government and whoever represents it within the Turkish Cypriot community.”

The latest provocations in Varosha will however be included in the UN Secretary-General’s upcoming report on Cyprus, Stewart said.

He said all developments on the ground – including events in Varosha – are recorded in detail in the Secretary-General’s reports. How the UN reacts is up to the Security Council, he added.

The meetings with the two leaders take place ahead of Stewart’s trip to New York where the UN Security Council is expected to vote in a resolution for the renewal of the UN peacekeeping force mandate at the end of July.

The meetings are also being held in the shadow of a response letter which Tatar sent Anastasiades last week in which he claimed that it is essential for the sovereign equality and equal international status of the Turkish Cypriots to be secured as this “will open the door for meaningful and formal negotiations, which will aim at establishing a structured cooperative relationship between the two equal states.”

Stewart was appointed Special Representative and Head of the United Nations Peacekeeping Force in Cyprus in November 2021.