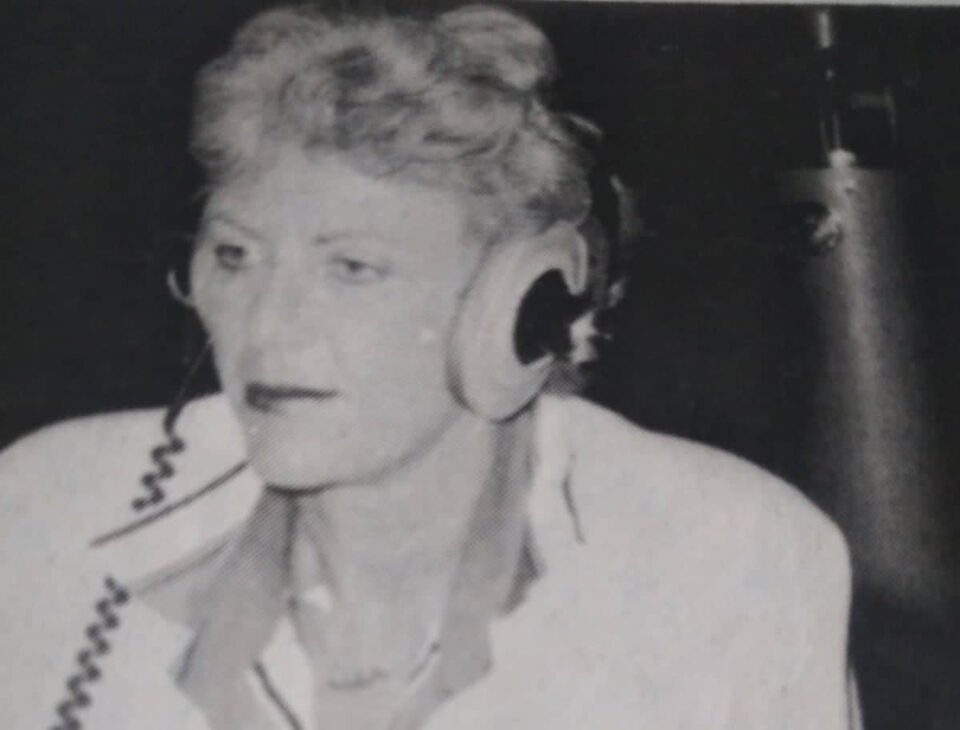 She had been on my mind, so I messaged my former boss at CyBC’s English language department, respected journalist and author Lana der Parthogh, to ask if she knew what had happened to Anne Partelides, we had lost touch when I left the corporation. Then a Sunday Mail obituary on June 19 announced she had died earlier in the month aged 92. I told someone that also knew her who replied, ‘She was a lovely lady.’ It sent me searching through old files for an interview I did with Anne for the Cyprus Mail in 1987 with the above title. I opened by quoting a make-up artist who said, ‘Anne is a lady, a real lady and there are few of those around these days.’ It was a common consensus among the staff.

She was one of the first newsreaders to appear on television in English after the 1974 invasion, but her voice was well known to the channel’s listeners long before then. Anne married a Cypriot and came to Cyprus in 1960. In 1964, she was asked if she would like to be a ‘temporary’ announcer and newsreader. Having just lost her home in the intercommunal troubles in 1963-64, beyond the Ledra Palace Hotel and therefore in a Turkish controlled area, she said she was happy to have something new to do to take her mind off her problems.

She enjoyed the work and, in 1974, she was still ‘temporarily’ working at CyBC. She was actually reading the news on July 15, 1974, the morning of the coup, when she became aware of a disturbance outside, and the sound of automatic gunfire made her realise serious trouble had broken out. With typical English aplomb, she carried on reading. ‘I decided to finish it, it didn’t seem logical to break off in the middle of a bulletin, but I had to shout because of the noise.’

A children’s programme came after the news, and she remembered putting on a record of Wind in the Willows and going outside to see what was happening. Soon, with other employees, she was forced to sit on the floor of the studio guarded by a young soldier who was amusing himself tossing and catching a hand grenade. ‘We were very frightened and uncomfortable as we were packed shoulder-to-shoulder in the studio without any air conditioning.’

Then she was called to make a forced announcement about the alleged death of Archbishop Makarios. She said the officer in charge had little English and was extremely suspicious of the news editor and her as he went over the script line by line and warned Anne to read exactly what was written. The coup was followed by the invasion and, once more, Anne’s domestic life was disrupted.

She was unable to go to work because the family home was on the ‘green line’ between the prison and the golf course, and they were trapped. When things returned to a semblance of normality, and she went back to work, she was told there was an intention to broadcast news in English and Turkish on TV as well as Greek. ‘I was given a hasty screen test and made my debut the following day.’

Her microphone experience must have greatly helped, for back then there were no auto cues and bulletins had to be read from the printed page. Even so, it must have been hair-raising the speed with which she was thrust into a new role. She explained, ‘It was only black and white then before the days of video, so there was no chance to see our faults and correct them. I hate to think how I must have looked and sounded.’

She shouldn’t have worried; she was a thorough professional. And, despite the loss of two homes, Anne found life here ‘very good indeed’. To foreign viewers who didn’t speak Greek, those bulletins, shared with another British lady, Win Christofidou, became must-watch features carrying the latest home news on the uneasy situation.

When asked about hobbies she gave a wry smile and said she felt inadequate there, she wasn’t musical, couldn’t draw or paint or… even knit! But she loved theatre and the ballet and a good book. An outdoor person who loved tennis, skiing and riding, she had concerns about the ecological balance in nature.

Anne, whose authoritative voice with its friendly undertone was distinct and clear, had her own fans. One gentleman I knew only tuned in when she was reading. Despite her long experience and seniority, she never displayed vanity or ego. Totally lacking in self-confidence as I was, Lana’s guidance and Anne’s always helpful personality steered me through nervous early days of talking to an unseen audience. For a British woman to leave such a lasting impression of respect and affection, still evident after all this time among Cypriots and other nationalities with whom she worked, speaks volumes for the one everybody regarded as ‘a lady’.

An advocate of change