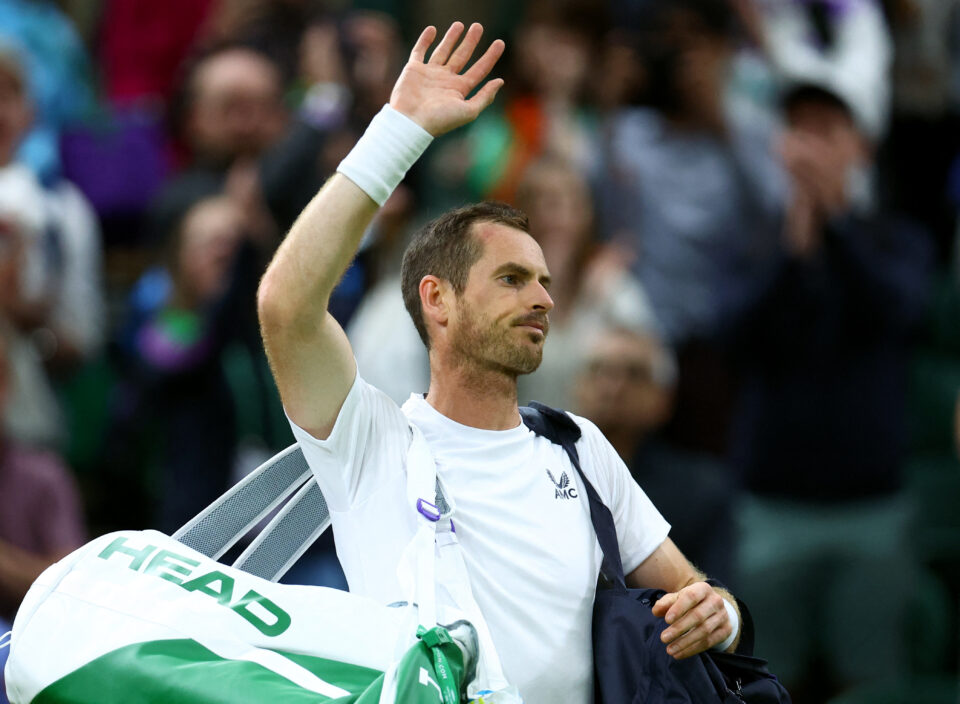 A dejected Andy Murray leaves court after losing against John Isner of the U.S. REUTERS/Hannah Mckay

Big-hitting American John Isner sent two times champion Andy Murray crashing out of Wimbledon 6-4 7-6(4) 6-7(3) 6-4 with booming serves and a barrage of aces in a second round clash on Wednesday.

While 37-year-old Isner strode ever closer to Ivo Karlovic’s aces record of 13,728 on the ATP Tour, Murray made his earliest exit despite battling back from the brink by winning a third set tiebreak.

Cheers of ‘Let’s go Andy, let’s go’ echoed around Centre Court before the roof came out and the hope faded along with the evening light.

Isner broke Murray in the third game of the first set and then held serve under heavy pressure in the next when the Scot, swooping in with backhand passes, had two chances to break straight back.

The towering American made the most of his crushing serve, firing in five aces on his way to taking the set 6-4, while Murray’s delivery was more erratic but also packed a notable punch.

Murray was in a deeper hole after losing the second set with number 20 seed Isner showing no let-up in his implacable first serve and dishing out another nine aces.

The home favourite then found himself serving to stay in the match at 4-5 in the third set, overcoming that hurdle only for Isner to hold serve and pile on the pressure into a second tiebreak which Murray won.

The fourth set went with serve before Isner again broke to go 3-2 up and needing only to then hold and serve out for victory.

He hit his 35th ace of the match for 30-0, followed it up with number 36 for three match points and needed just one, a volley, to seal the deal.

While the story was dominated by Isner’s serving prowess, he also produced some killer drop shots and returns to disarm an opponent who had never previously lost to the American in eight encounters although none were on grass.

Pristine Djokovic storms into third round with Kokkinakis thrashing

Top seed Novak Djokovic once again looked every bit the dominant player who has won the last three Wimbledon titles as he swept aside Australian Thanasi Kokkinakis 6-1 6-4 6-2 on Wednesday to power into the third round of the Championships.

On Monday the 35-year-old, bidding for his fourth Wimbledon title in a row and his seventh overall, had looked scratchy during his opening win against Kwon Soon-woo but he was back close to lofty standards against the 79th-ranked Kokkinakis.

The Australian famously defeated Roger Federer in the second round of the Miami masters at 2018 but there were no signs of another upset during the contest on Centre Court as the 20-time major champion dictated terms from the start.

The Serb, who defeated Kokkinakis in straight sets during their only previous meeting seven years back at Roland Garros, broke his opponent’s delivery early in each of the three sets for a total of five break of serves during the contest.

Djokovic faced a lone break point on his own serve and closed out the victory in two hours on his second match point to set up a third-round meeting against either Chile’s Alejandro Tabilo or Serb compatriot Miomir Kecmanovic.