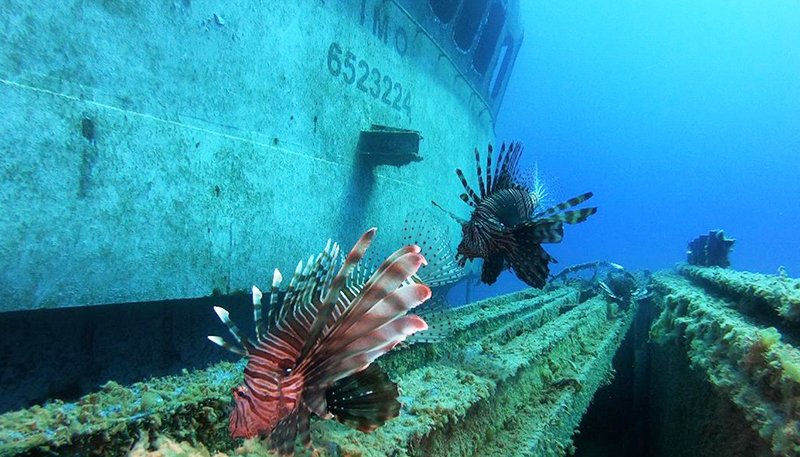 The invasive lionfish is now a common sight

Larnaca’s most popular diving destinations are now available in an interactive, digital form thanks to an innovative app launched by Larnaca’s tourism board.

Part of efforts to promote diving tourism, the virtual diving routes app is aimed at divers preparing to explore Larnaca’s underwater wealth as well as to the general public keen for a glimpse of the world below the waves, the tourism board said in its monthly magazine.

It comes as part of the Virtual Larnaca programme that showcases Larnaca’s tourist sites, including virtual tours of museums.

It also features ‘routes’ with underwater images at various diving spots, proposed diving routes and other practical information and statistics.

“The aim of virtual diving routes is on the one hand to allow potential divers to carry out their dives in advance and on the other allow non divers to explore and experience the most important spots of every dive,” it said.

The virtual diving routes were prepared with the cooperation of diving schools and the centres of excellence of CMMI (Cyprus Marine and Maritime Institute) and Cyens and the support of the deputy ministry of tourism.

The dives covered by the app are of the Zenobia wreck – one of 10 top wreck dives worldwide – the Elpis and the LEF1, which were sunk to form artificial reefs, and the Dorida and Skopia reefs.

The Zenobia was a Swedish ferry that capsized during her maiden voyage in 1980. The 172-metre-long wreck was sunk on its port side at 42 metres while the shallowest point is at 18 metres. In good weather conditions, visibility can reach 30 metres. The Zenobia a suitable dive for almost all qualified divers and ideal for advanced divers. The cargo of lorries and trucks is still onboard for divers to visit.

The marine life on the Zenobia wreck is abundant and diverse. Since the area surrounding the wreck has been designated as a Marine Protected Area (MPA) for many years, no fishing activities are allowed within three miles. Divers can encounter large dusky groupers, schools of greater barracudas, moray eels, cardinals, rainbow wrasses, lionfish, nudibranchs, sea stars, and a variety of schooling fish. Important additions are large turtles that patrol the wreck as well as the occasional dolphins.

The LEF1 vessel was sunk in December 2019 along with the MV Elpida off the coast of Voroklini to create Larnaca’s new artificial reefs. The 15-metre-long wreck lies at shallow depths making it ideal for non-experienced divers as well as for snorkellers. Its close proximity to the shore makes it easily reachable by boat. It enjoys good environmental conditions with high visibility, low currents and comfortable temperatures.

Divers witness an array of different species at the wreck and the adjacent rocky reef ranging from the small marbled spinefoot rabbitfish to the invasive lionfish to the dusky grouper.

The MV Elpida is a 63-metre-long cargo vessel from Greece which was modified for diving activities at a depth of 28 metres. The cargo containers and all decks are fully accessible to divers. The main deck starts at 20 metres while the masts start at a depth of 10 metres. Divers can access the large container area, the engine room, the bridge, as well as several decks.

One of the first colonisers is the red sea squirt – an alien species from the Red Sea while divers can encounter octopuses at the bottom of the wreck. As it is deployed within an MPA, the diversity is constantly increasing.

The Dorida reef is a shallow, very easily accessible dive site in Voroklini, accessible by boat within minutes. It enjoys pleasant environmental conditions, with good visibility and low current activity and can be utilised by both snorkellers and open water divers, although more experienced divers may also enjoy it.

Visitors to Dorida can expect an interesting combination of sandy and rocky substrates on its benthos, as well as meadows of the Mediterranean endemic Posidonia sea grass. The existence of these three substrates in close proximity alongside favourable conditions allow and support the presence of a large array of marine organisms. Dorida is home to sponge species. Small-sized species include colourful fan worms, starfish and wrasses, marbled spinefoot rabbitfish, small white sea fans and combers. Also commonly found are octopuses and the invasive lionfish.

The Skopia dive route is an easily accessible coastal location situated in Xylofagou. Divers usually start from the shore, but the location is also easily accessible by boat. The shallow nature of the route (1-18 metres depth), with a range of levels and entry points, makes it ideal for non-experienced divers as well as snorkellers. Advanced divers may also enjoy a leisurely dive. Skopia enjoys good environmental conditions with very high visibility and is subject to low currents and comfortable temperatures.

The route is equipped with varying rock walls and crevices of different lengths and heights, as well as enticing geomorphological formations and patches of Posidonia seagrass meadows. In combination, the latter support a wide range of marine species from small nudibranchs, colourful tube-worms and fire-worms, to the alien long-spined urchin, colourful starfishes, as well as colonies of the Mediterranean endemic pillow coral along with many fish species.

Other than the three-dimensional depictions, the diving routes also include videos from the wrecks, a detailed description of the diving spot such as the distance from shore, the difficulty of the dive, temperature of the water and depth, as well as information on the marine life in the area.