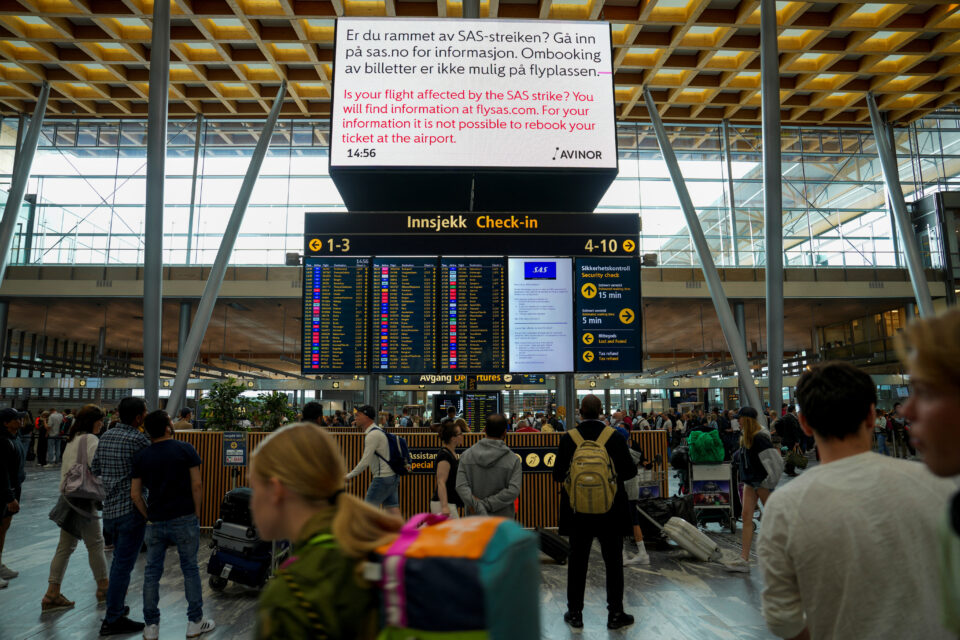 The departure hall at the Oslo Airport Gardermoen, as Scandinavian airlines pilots go on strike, Norway

Travel company executive Akis Kelepeshis expects the airport and airline chaos gripping Europe to subside in the coming weeks as thousands of flights have already been cancelled and more people are finally rejoining the workforce.

His comments on Monday came after deputy tourism minister Savvas Perdios advised people not to travel in July and August. Those who could travel outside these months should consider transferring their holidays further down the line, as this would benefit themselves, the airlines and the airports, said Perdios on Sunday.

This did not go down well with travel agents, with Kelepeshis offering that “perhaps what he [Perdios] meant to say was that Cyprus is open also in September, October and November, that those are also good months to travel”.

Kelepeshis, executive chairman of Top Kinisis Travel, told Sigma that perhaps that’s not quite what the minister meant. “And neither do I believe that it’s a policy of [President] Nicos Anastasiades’ government to try and keep travelling Cypriots in Cyprus,” he said.

A source from Hermes Airports, which manages both Paphos and Larnaca airports, told the Cyprus Mail that “five per cent of flights in June were cancelled – a rate lower than that at other airports”.

Problems with cancellations were highlighted at the weekend by Akel MP Irene Charalambides, who had been stuck for two days at Frankfurt airport in “third-world conditions”. She finally made it to her destination on Sunday.

Trouble at the airports have been blamed on staff shortages and strikes. The industry shed thousands of workers during the pandemic which it has since failed to replace, despite increased demand for travel.

The desire for travel, after two year of pandemic restrictions, is likely to have diminished for many across Europe, as more and more people experience flight cancellations, long delays in departures and lost luggage.

But Kelepeshis felt the worst was over. He maintained that the main problems appeared to have been in May and June and that “primarily the airlines were not adequately prepared, and, to a second degree, the airports, were unable to manage the heavy air traffic.”

“I believe that as time passes all this is improving: they’ve seen the issues which have arisen and thousands of flights for July and August have been cancelled so that there won’t be further problems,” he said.

“I expect there to be far fewer problems in July and August compared to May and June, and certainly we’ll have a very good summer period,” he added.

Asked about whether his customers have had issues, Kelepeshis said that incidents have occurred everywhere but that in Cyprus, mainly departing directly towards other European nations, the issues have been much fewer. There have been complications where connecting flights via major European hubs are concerned.

“I want to pass on the message to Cyprus’ travelling population that July and August, which are the main months during which Cypriots go abroad – mainly to Greece, are unlikely to have any issues,” Kelepeshis emphasised.

He said that the destinations typically favored by Cypriots, namely central Europe and Greece, were not that impacted.

The travel issues plaguing much of the continent has been linked to the reason behind EasyJet’s chief operating officer resigning on Monday, after thousands of flights have been cancelled – many with little warning.

Elsewhere, British Airways staff at London’s Heathrow airport voted to strike after the airline failed to roll back a ten per cent pay cut imposed during the pandemic, with the strike likely to take place during the peak summer holiday period over the next two months.

Airports, including Gatwick near London and Amsterdam’s Schiphol, are also limiting the volume of passengers they will handle over the summer.

The British transport minister said on Thursday it was up to the airlines to avoid a repeat of recent chaotic scenes at airports, calling for them to run “realistic” summer schedules.

Industry executives say it is hard to recruit for often physically demanding, relatively low paid work at airports often located out of town. Training staff and getting them security clearance to work at airports also takes months.