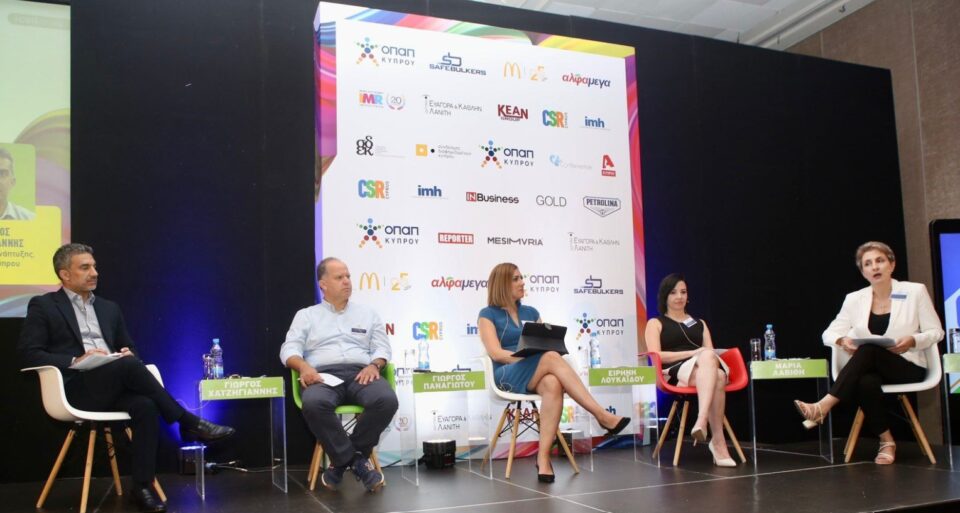 Numerous stakeholders from the Cypriot business, research and academic communities examined the implementation and benefits of corporate sustainability at a conference held earlier this week at Hilton Nicosia.

The conference, which took place on Tuesday, delved into a number of issues, including business transparency, fair and equal treatment in the workspace, the gender pay gap, sustainable investments, as well as the importance of adopting environmentally friendly strategies.

The conference included a roundtable discussion on corporate sustainability and corporate social responsibility.

Hadjiyiannis said that in order to respond to the new conditions and properly implement sustainability and responsibility strategies, companies must look deep within themselves to remove any negative elements they have and offer the services that consumers really need and in the way that they want.

He pointed out, however, that changes mainly need to be made by legacy companies, in contrast to startups, who tend to operate based on more modern strategies that already incorporate sustainability principles.

Heroes Made founder Maria Lavithi said that sustainability was a principle that formed part of her company’s strategy right from its inception.

“After all, social and emotional education are an integral part of sustainability,” Lavithi said.

During a segment in which she presented the five pillars that her company uses as guiding principles, Lavithi stressed the importance of self-awareness, explaining that this is something that is interconnected with the principle of sustainability.

She also emphasised the need for the issue of sustainability to be integrated into Cypriot education, saying that “we encourage schools to leverage technologies as part of the education system”.

Grow Sustainability Consulting managing director Irene Loucaides spoke on the extension of European legislation on sustainability, from large businesses to smaller ones.

She explained that as part of the legislation, larger organisations are asked to consider not only their own sustainability but also that of their suppliers.

“Through assessments and evaluations that we have carried out, we have seen that several businesses achieve a very high degree of sustainability because, especially in cases of family-owned businesses, they possess human values,” Loucaides said.

She explained that such values include transparency, respect for staff, as well as providing equal opportunities, among other attributes.

With the above in mind, she concluded by saying that small businesses must also be empowered and allowed to “take the reins”.

Finally, George Panagiotou referenced an old KEAN sign from the 1960s which stated that “there are no workers, only partners”.

Commenting on the sign, Panagiotou said that this kind of culture existed in the company from the beginning and has since been passed down to its subsequent owners.

“Despite being an introverted company, we have done quite a lot of things,” he said, citing environmental actions, activities and synergies.

“Incentives must be given by both the banks and the European Union to promote development based on sustainability”, he added, before stressing the importance of continuous learning and training.