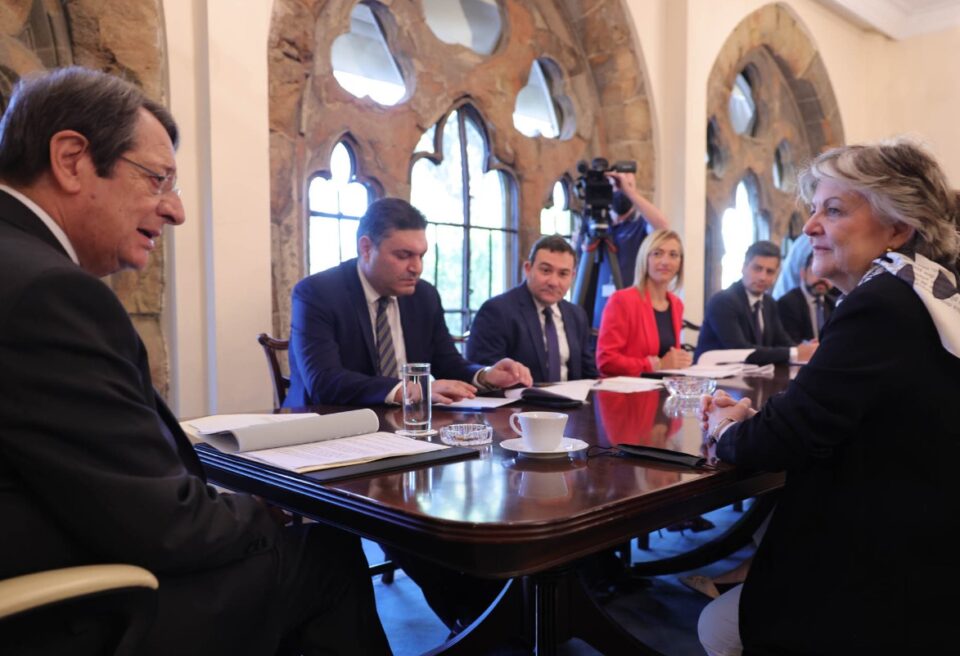 President Nicos Anastasiades on Thursday met with EU Commissioner for Cohesion and Reforms Elisa Ferreira,  with the latter travelling to Cyprus to announce the approval of the Cohesion Policy’s Partnership Agreement, as well as the operational programme and the Just Transition Plan for Cyprus.

Cyprus is the first country to have its Cohesion Policy programme approved for the European Regional and Development Fund, the Cohesion Fund, the Just Transition Fund and the European Social Fund Plus.

After the meeting, Ferreira told journalists, among other things, that she had a very interesting and very open conversation with President Anastasiades.

“It is really a pleasure for us to be able to agree with Cyprus on the development agenda and the support from European funds for the whole period of 2021 – 2027,” Ferreira said.

“Cyprus has a very good performance in terms of the use of these funds and we think this new period will give again to Cyprus a good stimulus in getting more free from the dependence on fossil fuels, to have development based on the use of all digital and innovation technologies and in fact to make the best use of these funds for the continued, sustainable, growth and development of the Republic of Cyprus,” she added.

When asked about the absorption of EU funds by the Republic of Cyprus, the commissioner said that Cyprus is one of the most efficient users of these funds, adding that “we are very glad we have opened a new period of support for the sustainable growth of Cyprus”.

Furthermore, asked how much is allocated to Cyprus for the entirety of the programme period, Ferreira said that just from the Cohesion funding and not the Recovery and Resilience Fund, the total amount is approximately €1 billion, which is allocated to different areas.

Regarding the Just Transition Fund (JTF), this represents the first pillar of the Just Transition Mechanism (JTM), is considered to be a crucial tool to support the countries and regions most affected by the transition toward climate neutrality, allowing them to receive bespoke support.

The fund originally had a fund of €17.5 billion at its disposal,  but this has risen to €19.2 billion after taking into account present-day prices.

The European Commission has explained that his amount corresponds to fresh money made available to support EU countries in their green transition.

Of this amount, €7.5 billion will be financed under the EU’s 2021-2027 budget, while the remaining €10 billion will constitute external assigned revenue sourced from the European Recovery Instrument.

“Cohesion Policy investments will strengthen the economy of Cyprus and enhance competitiveness and diversification of the local business activities with a particular focus on addressing social and environmental challenges,” Ferreira stated ahead of her visit.

“Cohesion Policy funding will improve the quality of life of the citizens of Cyprus”, she added.

The reason for this is that Ferreira is also in charge of the Cyprus Settlement Support and the Aid Programme, which aims to facilitate the reunification of Cyprus by encouraging the economic development of the Turkish Cypriot community.

In addition, the commissioner will also meet with the members of the Committee on Missing Persons in Cyprus, as well as young Greek Cypriot and Turkish Cypriot graduates from the United World Colleges who received EU scholarships.

She will also visit several Cohesion Policy projects and meet with the mayors of Nicosia, Limassol, Larnaca and Paphos.